You are here: Home / Culture / Entertainment / Review / Review: Sex Education S2 Celebrates All Kinds of Kinks, Except One 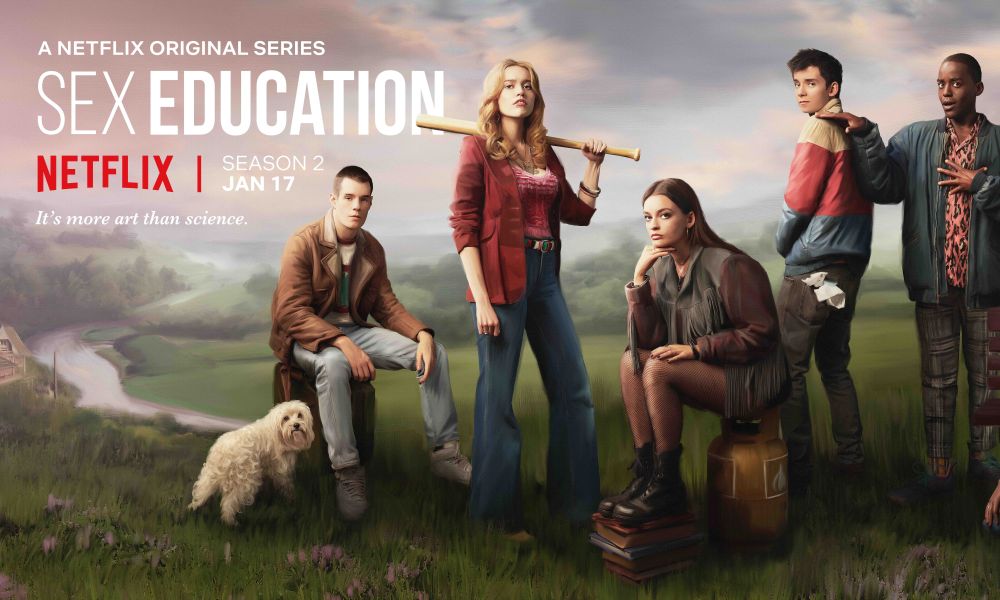 The Netflix series Sex Education recently returned for its second instalment and is already being met with critical acclaim. At the time of this review being written, it has a 100% rating on Rotten Tomatoes. Does it deserve such high praise?

Sex Education focuses on the neurotic and uptight Otis, who is the son of the free-spirited sex therapist Jean. Mother and son don’t see eye-to-eye on a lot, but they do have one shared skill – their ability to offer others advice on sex. Alongside his gay best friend Eric and his love interest Maeve, Otis tackles the sexual dramas of his sixth-form college, for better or worse.

The second series picks up where the first one left off. Otis is still trying to figure out where he fits in with the world of sex, as he now has his first girlfriend, Ola. Elsewhere, Eric has gotten his first boyfriend – the mysterious Rahim – and Maeve’s long-absent mother has returned into her life, promising her daughter that she’s now sober and ready to be a mum.

There is undoubtedly a lot to love about ‘Sex Education’. The cast are excellent, delivering on the laughs and giving the emotional scenes some remarkable vigour. Even if you’re familiar with the actors (Asa Butterfield, who plays Otis, is often remembered for playing the lead in ‘The Boy In Striped Pyjamas’) you cease to see the actor and see only their character.

Characters that may initially appear one-dimensional like Adam, the school bully, or the clique of ‘untouchable’ mean girls (and their gay friend) have a great level of depth. The series takes the time to explore the backstories of numerous characters and must be commended for its excellent world-building. After being drawn into the lives of all these characters, you end up wanting to live in this picturesque small town.

However, there are two issues with this series (and both are spoilers, you’ve been warned!)

The way the writers push certain couples on the audience feels manipulative. It’s been clear for a while now that Eric was always going to end up with Adam, despite the fact that Adam bullied him for years. To achieve this end by the final episode, the writers have Eric publicly humiliate Rahim by kissing Adam on the stage in the middle of the school production of ‘Romeo and Juliet’.

Not only is this out of character for Eric, but it leaves a sour taste in the viewer’s mouth. Rahim ends up leaving the building in tears, as the audience erupts into cheers – presumably happy that Eric and Adam are now a couple, for some reason.

To achieve this end, the writers began inserting not-so-subtle hints into the show that Rahim and Eric weren’t compatible. When Eric takes Rahim to church with him, Rahim’s non-religious background is inserted as an indication that they’re not a match.

Even Eric’s mother notes that they don’t make a good couple.

Are we supposed to believe that Adam, who spent most of his life making Eric’s a misery, would be a better boyfriend? Give me a break.

However, this could be a testament to how good the show is. At least its characters elicit a strong emotional response!

As mentioned before, the series contains a student production of ‘Romeo and Juliet’. But there’s more – the show was full of innuendo: penis props, vagina hats and students gyrating on stage.

Of course, the show plays this for laughs, which is understandable. The idea that the students would interpret William Shakespeare in such an oddball way is humourous.

However, the show was dismissive of the idea that anybody would find this objectionable. When Headmaster Groff, the series’ unofficial antagonist, slams the show’s sexual overtones, he is treated like a pariah by the other characters.

The cast of the play are all supposed to be sixteen years old. It doesn’t seem entirely unreasonable for somebody to feel uncomfortable watching a bunch of teenagers thrusting their hips in such a provocative manner.

It felt like a wasted opportunity for the show.

In inhabiting a world full of characters with varying levels of experience on sex, it feels as if one perspective was left in the shadows – the conservative one. Whether it’s one you agree with or not, it exists. There are people who don’t like the idea of sexual education for religious reasons, people who are staying celibate until marriage, and so on and so forth. If you were to watch this show, you would think such people didn’t exist. The show went to lengths to represent people of all sexualities and kinks, but people who weren’t in a rush to have sex – a potentially interesting storyline – were notably absent.

The show went to lengths to represent people of all sexualities and kinks, but people who weren’t in a rush to have sex – a potentially interesting storyline – were notably absent.

All in all, the second series of ‘Sex Education’ is thoroughly enjoyable and immersing. In creating in which modern-day pleasantries co-exist with 1980s charm, the series creates a world that is in many ways unlike our own, but also distinctly familiar.

It is quite simply, escapism at it’s finest.