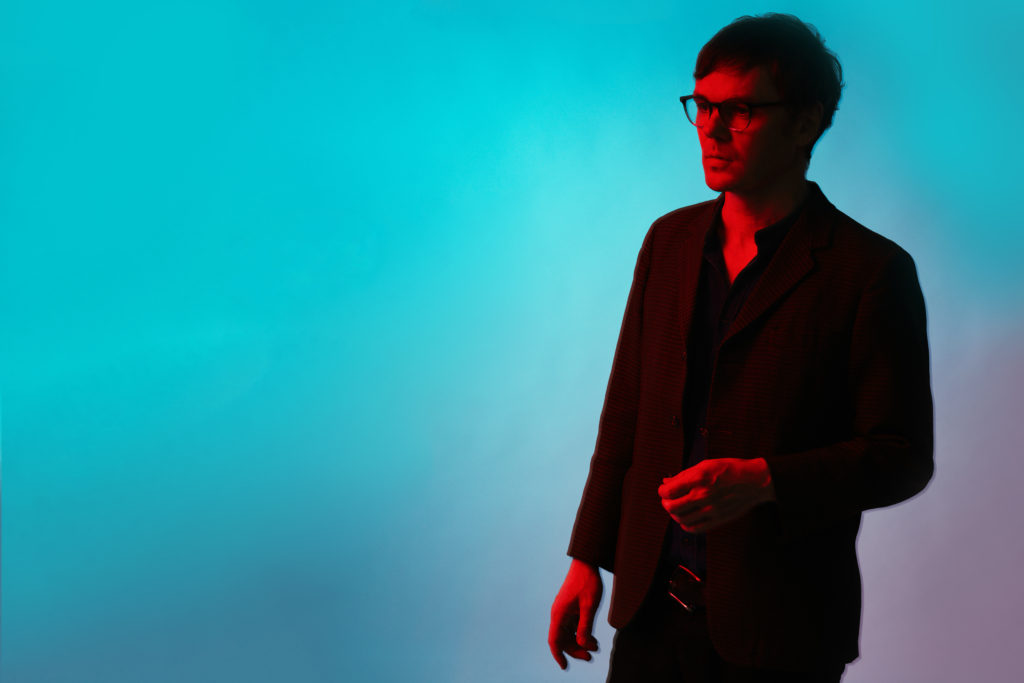 “I will draw a picture,” intones Roddy Woomble on the closing track – ‘RW OC Cuttup’ – of his new EP.

If the record did have a dedicated artist it might have been Edward Hopper. The ambience overall is something like Nighthawks – Hopper’s 1942 painting of a downtown diner with the customers absorbed in their own worlds, sitting a suitable social distance apart from each other.

No one interacts much in the landscape Woomble conjures. He sees a “girl on a motorcycle stop for a cigarette” but this fleeting image is the closest we get to any human contact.

Most of the lyrics – half sung/ half spoken in confession or self-help therapy style – sound as though he is working through his relationship with his home, his past or his place in the present. At times I find the text too abstract to get a handle on (“Do our souls cause the desert to exist?”)

Other lines cut through with greater resonance – “a tapestry of crows,” “the ceiling above looks like a grave” and “I seem to be a completely different person everyday, surrounded by examples of every new invention” he tells us – neatly encapsulating the modern challenge of adapting both to our own changing circumstances and the unceasing pace of technological change.

If the EP had to be classified by genre, I suppose it would be filed under ‘ambient’ – or more precisely Ambient Noir, if such a sub-genre exists and doesn’t sound too pretentious.

Woomble’s compelling vocal delivery is given depth by his Scottish accent and gives his narration an incantatory feel.

The vocals are complemented by a jazz-like soundtrack which shuffles and pulses along, enhanced by a haunting ‘choir’ of backing singers. The EP was written alongside frequent collaborator and Idlewild bandmate Andrew Mitchell. “I… really liked the idea of trying to read some of my words over his compositions… It was interesting just to have an electronic drumbeat to base my words around,” says Woomble of the partnership.

A more acoustic flavour is added to the mix with the track ‘Secret For The Last Time’. It could be a tribute to The Velvet Underground, Leonard Cohen, Bob Dylan or Donovan.

The final track ‘RW OC Cuttup’ has one specific thing in common with Dylan’s new release (Murder Most Foul) in that it is 17 minutes long. It rewards repeated listening. Woomble’s voice becomes absorbed into the atmospheric, discordant soundtrack. It sounds, to me, like the sun setting or rising over a snowy landscape to the accompaniment of a cold moaning wind.

Indeed, much of the EP sounds like a soundtrack in search of a film. Oliver Coates (OC) is a London-based cellist, composer and producer, who performed a headline set at the 2019 Manchester International Festival under the curation, suitably enough, of film director David Lynch.

Everyday Sun is mood music for dawn or dusk, especially if you are away from home, looking out on an unfamiliar terrain.

You may even fall asleep to its hypnotic rhythms. Just be warned that if you’ve listened closely to the words, you may dream of an idyllic walk on warm sand or of looking for guidance from the stars, in the middle of a dark ocean. This EP is certainly one for brooding nocturnal animals to get lost in.