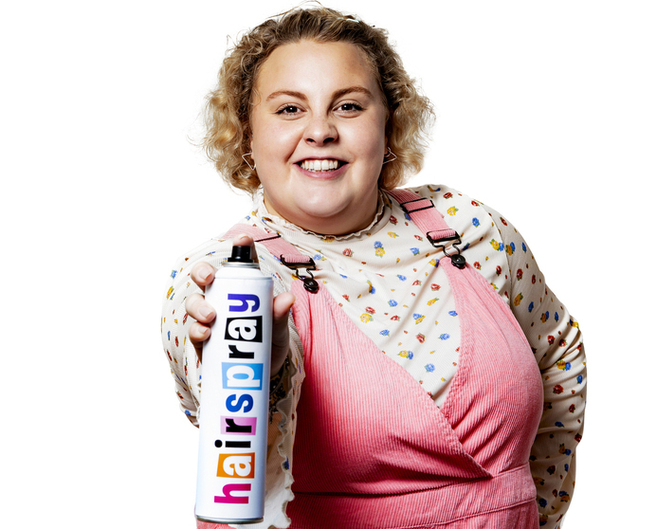 Lizzie Bea’s joyous performance as Tracy Turnblad on Britain’s Got Talent helped bring the importance of live theatre to the forefront of the national consciousness. Here she talks about that BTG number alongside Michael Ball, her excitement at returning to the stage despite the pandemic and why she wants to breakdown casting stereotypes and play Elphaba.

Most of us will remember March 2020 as the month we went into lockdown when the coronavirus pandemic swept across the globe. But for Lizzie Bea, it will always be special because that was the month she started rehearsals for the next West End production of Hairspray.

Lizzie had previously auditioned for the role but wasn’t successful.

“Going through the auditions, it was an incredibly emotional process because I gave everything and everything was on the line,” Lizzie said. “This probably really is now my last chance to play Tracy.”

Having not trained in dance, the creative team wanted Lizzie and co-star Jonny Amies to get a head start by learning the show’s challenging choreography. “They kind of gave us this boot camp,” Lizzie added, “so that when the ensemble turned up, we weren’t flailing around in the background.”

Despite the uncertainty about the future of the show, the full company came together to begin rehearsals on Monday 16 March. It was announced that evening that the West End would shut down due to lockdown restrictions.

“It was all building up, and then we had two weeks and two days of rehearsals and got sent home. And that was that.”

The show was pushed back until September 2020. After the rise in COVID cases around the UK, the producers have delayed the run for a year. The show will now open at the London Palladium in April 2021.

Not letting the pandemic stand in their way, the producers took the opportunity to have the cast perform on the semi-finals of Britain’s Got Talent.

Luckily, Lizzie learnt the routines before the lockdown and just needed polishing the choreography with resident director and choreographer, Dominic Shaw.

The ensemble, however, learnt the routines via Zoom and videos that Dominic created.

“The fact that they even let us do Britain’s Got Talent knowing it would be so much work it’s just a testament to our amazing producers and creative team. They are so passionate about letting the show still happen.”

The full cast, including musical theatre star Michael Ball, performed three metres apart from each other on the TV show in full costume to a brand new track created by the show’s composers, Marc Shaiman and Scott Wittman. Lizzie explained that Good Morning Baltimore was in a higher key so it would mix into the mash-up better.

Lizzie reveals she was shocked this production has “come back”, feeling “lucky” she has the opportunity to perform with Michael Ball, who will be playing Edna Turnblad, Tracy’s mum.

Even though there are not many parts in Lizzie’s casting bracket, the “fat girl” parts as she calls them, Lizzie is excited to try and break the stereotypes that come with casting.

“I’m incredibly passionate about like breaking stereotypes. I would love to come out the other end of this and be able to audition for roles that aren’t traditionally played by fat people. Maybe the world will change soon. My ultimate dream role would be Elphaba in Wicked.”

She continues, “I would like to live in a world where if you’re the best person for the part, you get it, and it doesn’t matter what you look like.”

Thinking to the future, Lizzie is excited for the run of Hairspray and the changes in the theatre industry.

“People in my industry are becoming better at celebrating people’s successes. Suppose we can carry on celebrating other people’s success and not feeling like everything’s a competition. In that case, I think that is going to be a really positive outcome.”

The pandemic forced arts venues to close their doors, but things are looking up for theatreland.

“The West End is the pinnacle of UK theatre,” Lizzie says with a smile. “It is going to be changed forever because of what is happening at the moment.”

“We don’t know what will happen come April, but what they have told us is that no matter what, the show will happen. And that is why we know we’re so lucky because to have that belief behind us, it’s amazing. To know that despite all the negativity, we’re still going to do our show is fabulous.”

Hairspray the Musical will be arriving at the London Coliseum from 22 April to 28 August 2021.