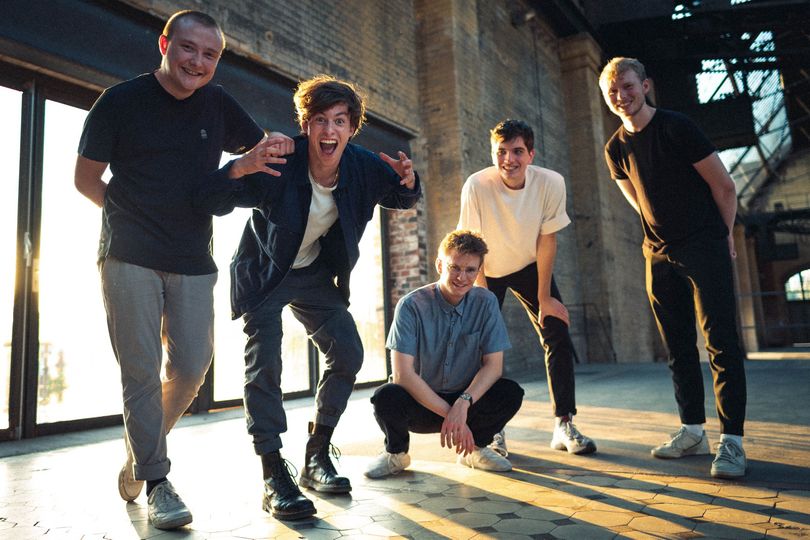 German indie-rock band Giant Rooks are quickly making their name known in the music industry, one hit track at a time. Forming in 2015, after meeting in Hamm, the band have since moved to the cultural hub of Berlin, which is known for inspiring some of history’s most influential musicians – including David Bowie. The band consists of singer Frederik Rabe, guitarist Finn Schwieters, bassist Luca Goettner, keyboardist Jonathan Wischniowski, and drummer Finn Thomas.

Their second EP Wild Stare (2019) was an instant success and proved their knack for blending genres with enigmatic energy and thought-provoking lyrics. They were rewarded for their efforts with over 50 million streams and despite not even having an album released, they’ve earned several German music awards, including the 1-Live Krone.

After selling out shows all over Europe, they’ve returned with the release of their long-awaited debut album, Rookery. They’ve given a taste of what’s to come, with releases such as the high-powered indie track, ‘Heat Up’, the anthemic, ‘Watershed’, and the slow but compelling number, ‘What I Know Is All Quicksand’. Their latest and final track before the album is ‘Misinterpretations’, which is beautifully moving and mirrors the feelings of being caught up in your thoughts.

They’ve taken inspiration from a variety of artists including Celeste and Joy Crookes. Consistently changing the blueprint of what’s expected of an ‘indie-rock’ band, they’ve also combined other unexpected genres such as soul, with a heavy dose of success.

Not letting the pandemic slow them down either, they’ve kept themselves busy, from live streaming to counting down the release of their forthcoming album, and playing various open-air shows in their native country.

aAh! Magazine caught up with Frederik Rabe and Finn Schwieters over Zoom to talk about the latest album, playing shows in Manchester and future goals.

You’ve just released your new single ‘Misinterpretations’ from your forthcoming album Rookery. Why did you choose that track as the final one to be released from it?

Frederik Rabe: “We had a few at the start and we wanted to give…the album has twelve tracks. We wanted to release four of them before the album’s release. So, we wanted to get the full picture, I think, of what’s on it, and it’s not possible because I think each song is very different from one another.”

Finn: “Yeah, I think we wanted to show the diversity of the record, which is why we released songs like ‘Watershed’, and then a song like ‘What I Know Is All Quicksand’, which is completely different, I would say. The latest single is ‘Misinterpretations’, which I guess it’s really different from the other ones as well.”

You formed the band five years ago, how long was this album in the making?

Frederik: “Yeah, we formed the band five years ago and it’s more like we needed to figure out where we wanted to go with the debut. But, the actual writing process for the record started two years ago. So yeah, it’s taken the best part of two years to write and produce it.”

Finn: “But, I think it took us the best part of five or six years to be able to produce and write an album, like this for our debut album.”

What was your initial thought process behind creating the album, when did you know what you wanted to create?

Frederik: “I don’t think there was like this was one moment, where we knew okay we wanted to sound like this. It was more like a…”

Finn: “Yeah. But, I think three years ago, we kind of felt ready to do the album. Before that, we didn’t really feel ready to do it. Because, we needed that time, playing live and just figuring out how we are working as a band. So, yeah two years ago, it felt okay. Now, is the time. The time has come. We couldn’t run away anymore.”

A lot of your songs seem to be a lot longer than other bands, who normally try to keep them under four minutes for radio play. Do you keep the length of the song in mind, when writing them?

Finn: “Some songs work as a seven minute and others work in two minutes.”

Finn: “Yeah, like the song ‘Silence’. It’s a very short, smashy song and I think it’s nice to have this contrast, and you can play with it.”

I also love how you experiment a lot with your music, with dance and hip hop. What’s it like trying to blend genres, do you all have different music tastes?

Frederik: “And, I think it’s a nice mixture of these different kinds of music, that we are trying to combine.”

You’ve also got an upcoming tour next year. Which song are you most looking forward to playing live from the new album?

Frederik: “I would say… my favourite track on the album is ‘Into Your Arms’. It’s the last one. Yeah, and I think Finn’s favourite ones are ‘One Another’ and ‘Quicksand’. They would be the most fun to play live.”

When you perform live it’s very cinematic. You appear to bring this quality into your music videos too. Is it important to you, to try and keep the performance central?

Frederik: “It’s certainly something we are into.”

Also, regarding your album cover, what was the process behind it?

Frederik: “The album cover… so, the pictures on the album cover, yeah, we had a photoshoot with a great photographer, Joesph Kadow, from Berlin. We had a trampoline which we jumped on and while we were mid-air he took the photos. Then, two amazing artists from Dortmund called YAWN, they did it in photoshop and put the headless…”

Frederik: “And, the clouds and everything. Then, they put the people on it .”

Finn: “The concept was just, it has this beauty to it but we are falling, which is kind of a scary thing. But, it also has this very peaceful mood, kind of. Yeah, again, it’s a nice contrast, I think. It’s really just saying something. It’s okay that you’re falling, maybe.”

Do you feel that’s the main message of your album, combining those two things?

Finn: “Yeah, I think it definitely intertwines with the album cover and I don’t think we have an actual message. I think it’s more like, we ask ourselves questions during the writing process, which are like, ‘what’s my role in the world?’, ‘what am I supposed to do?’ and ‘who am I?’. Yeah, these kinds of questions. And, yeah I think the album cover is maybe the… it fits very well with these questions. This motive of falling.”

You were formed in Hamm and have since moved to Berlin. Have there been any large differences between your inspirations?

Frederik: “It’s difficult to say because I don’t think the location is that important. We are all connected through the internet like we are talking now, and the location isn’t that important anymore. Of course, it was more of a natural step to move to Berlin and to build our own lives here. Obviously, a lot of people… it’s a big music scene and a lot of studios, there’s a lot of opportunities to be a band that I don’t think necessarily changed what we’re doing.”

Also, you’ve impressively played over 350 shows, which has been your favourite and most memorable so far?

Frederik: “I would say the first show in Manchester. The first headline show, which I think was at Night & Day Cafe. That was really cool and was so loud. The people were singing along and it was so intense, I think that was my favourite show, because we didn’t expect that. Yeah, as we come from Germany and we travel to another country and then play shows that are sold out, and people are screaming and singing along. That was just… so weird in a very positive way.”

Have you found the crowd’s reaction in Manchester different in comparison to other shows?

Frederik: “Yeah, they are. I mean, the people in the UK and especially Manchester are very enthusiastic. They sing along to the weirdest parts. For example, no one in Germany sings along when Luca, our bass player plays a bass part, we have a lot of them. But, no one sings along. But, in Manchester, the people sing along to the basslines and it’s amazing, we love it. It’s so funny.”

In comparison to Germany, Manchester still hasn’t got any proper live shows yet. You’ve been playing some open-air shows and you’ve streamed one from Berlin. How have you found adjusting to it?

Frederik: “I mean… it’s just the way it is, you know. You’ve gotta cope with it and make the best out of it. Just intuition I think. And, we didn’t think too much about it as you can’t change it.”

During your time as a band, you’ve achieved such a lot, including various awards, many followers on Spotify and sold-out shows all over Europe. What would you like to do next?

Frederik: “I’m looking forward to writing new songs, to be honest. So, in the last month, we were really busy finishing the album, and yeah, we went really into detail because we had a lot of time. But, it took a lot of time to do and finish the album. I can’t wait to write new songs. At the moment, I don’t feel that I could write new songs. The record must be out, and then on the 29th of August, we can go on and play new songs, and write new songs and stories.”

Musically, what are you thinking for your next releases following your debut album?

Finn: “This is something we’ve got to figure out. We haven’t thought too much about it.”

Giant Rooks’ latest album Rookery is available from Friday 28th August on all major streaming services. You can buy tickets to their Spring 2021 tour here.

The dates are as follows:

Keep up with Giant Rooks: