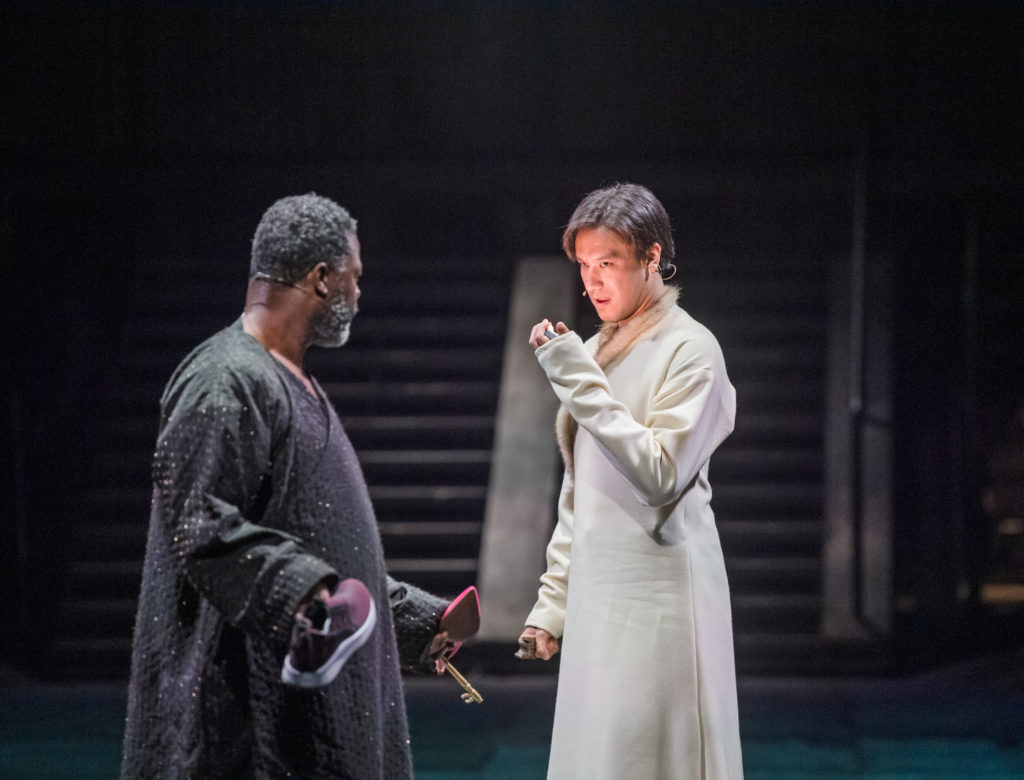 Mayfield Railway Depot was a fitting space for this hugely ambitious project, which took two and a half years to go from inception to realisation. Once abandoned for over fifty years, Mayfield depot represents the lingering vestiges of Manchester’s renowned industrial past – now crumbling; iron rusting, water seeping through fissures. The location is no coincidence, as first canals and then trains enabled the growth of Manchester into a leading city of the industrial age – a city of trade that helped shape modernity.

This production, from the team behind the opening ceremony of the 2012 Olympics and the theatrical production of War Horse, combines dance, music, drama and three dimensional projection mapping to impressive effect. Invisible Cities is adapted from Italo Calvino’s poetic novel of the same name, although the narrative approach taken by writer Lolita Chakrabarti leans more towards an Aristotelian formula.

The young explorer Marco Polo (Matthre Leonhart) is forced to placate Kublai Khan (Danny Sapani) and earn his freedom by conjuring visions of imagined cities. The stage is set for two of history’s great names to engage in some mental gymnastics. It’s strange to think that the young Marco Polo did indeed travel with his father and uncle to modern day Beijing and become a trusted confident of Kublai Khan in the thirteenth century. This production, directed by Leo Warner, is no history lesson, however – rather, as with Calvino’s novel, it is a meditation on life, death, memory, time and language.

The drama opens with Khan mourning the death of his wife, when suddenly Marco Polo is chased into his court by guards. Marco proves his worth through language and the great Khan makes the decision to spare his life. This action all occurs within the first ten minutes; the dramatic opening pace setting the tone for the next eighty.

Expansive themes roll like waves across the audience. The frantic pace makes the narrative choppy, leaving you feeling a touch overwhelmed as you bob up and down, with little time to reflect. The energy is understandable, however, as it revolves around the youthful intellect of Marco Polo as he attempts to manoeuvre the king into eventual submission. The unrelenting choreography by Sidi Larbi Cherkaoui complements this well. The dancers, from the renowned company Rambert, are all very young, which at first seems at odd, as they must cross over and play Khan’s guards, but their relentless movement fills the space to great effect. They represent Marco Polo’s words brought to life – the energy and creativity of the city; youth that will fade and eventually decay.

The production is divided into themed sections that reflect upon the internal journey of the central characters. Projection enables a sense of flow and unity throughout, and the visuals embody themes of travel and the written word – the word that brings ideas to life. This aesthetic has a slight video game quality, playing on themes of what is real and what is imagined. The city must first be imagined before it can exist – a nod to virtual reality.

Both actors, although they sustain the dynamic of the structure well, are often overshadowed by what occurs around them, and their interaction takes perhaps too predictable a track, going exactly where you might expect. Kublai Khan looks to console himself that his life has deeper meaning and his kingdom lasting purpose through Marco’s descriptions; as the traveller looks back things, come into view rather than passing by. This is life and death as the city. Projection onto the floor follows the theme of nature as our first teacher of geometry – and from geometry springs architecture and the city. There are no ideas of a ‘great architect’ but instead of man forcing the world into being through abstract thought and reason.

The choreography incorporates geometry in a simple but visually interesting way, linking back to Calvino’s novel, which has an intricate mathematical structure. The overall sound design makes excellent use of the space. Composers Dustin O’Halloran and Adam Wiltzie, along with sound designer Gareth Fry, have created a cinematic score that blends seamlessly with the visuals from start to finish, never looking to override them, but rather to complement. Considering the space is so echoey, it’s extremely well thought out – sounds carry through the space rather than reacting against it.

Apart from a few lines regarding refugees and the destruction of cities, there is no overt comment on the present until near the end. This occurs, when Khan insists Marco reflect on his own city of Venice – the most renowned city built on the trade of goods – which he admits has been within all his imagined descriptions. From this arises the idea of how consumerism will dominate our future cities, to the inevitable detriment of the environment. This feels bolted on rather than well crafted – and is a little too much of the expected target. I couldn’t help thinking of Banksy’s recent ‘paintings’ of the giant cruise liner blocking the Molo, Venice, as conjured by Canaletto – an image of modernity and globalism destroying the city physically and spiritually. You cannot help but feel that a great opportunity was missed to address the realpoitik of our present cities. Manchester is seeing its industrial heritage torn down for short term profit in the shape of cheaply built, unaffordable flats – the winners and losers of globalisation. We are witnessing a resurgence of public architecture that stifles rather than lifts the spirit; health in cities is now declining rather than improving.

In Calvino’s novel, Marco suggests the perfect city could be found from the best elements of the best cities, but Khan cannot, or does not, want to see, being too preoccupied with what his own life and death means. In a key moment very well brought to life by the actors, Khan reflect on the royal arch of construction – saying he just wants to see the arch. As Marco replies, however, ‘without stones there is no arch.’