Italian fashion house Gucci has pulled a black polo neck knit with a red lip cut out from its Autumn/Winter 2018 collection this week, after receiving backlash in the form of accusations of racism.

Black History Month in the United States has been celebrated every February since 1970.

On Wednesday, Gucci apologised for the jumper via Twitter, stating: “Gucci deeply apologises for the offence caused by the wool jumper. We can confirm that item has been immediately removed from our online and all physical store.”

Gucci deeply apologizes for the offense caused by the wool balaclava jumper.
We consider diversity to be a fundamental value to be fully upheld, respected, and at the forefront of every decision we make.
Full statement below. pic.twitter.com/P2iXL9uOhs

Some people are sceptical of the brand, with one Twitter user, unemployedfatty, saying: “Gucci made this item slightly offensive (just racist enough to cause outrage, but not racist enough to be indefensible) on purpose, so that Gucci could get black twitter talking about their item. Then Gucci came with the textbook apology after they got the attention they wanted.” 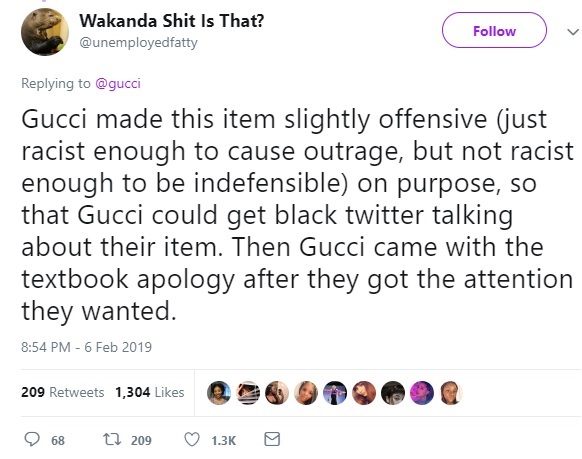 The balaclava knit jumpers aren’t new, however. Instagram’s  hottest fashion account, DietPrada, brought it to people’s attention that these masks and jumpers were sent down a runway in Milan in February of 2018. This went seemingly unnoticed.

Perhaps if Gucci had more people of colour involved their design, construction and admin processes then this wouldn’t have happened… unless they wanted it to.