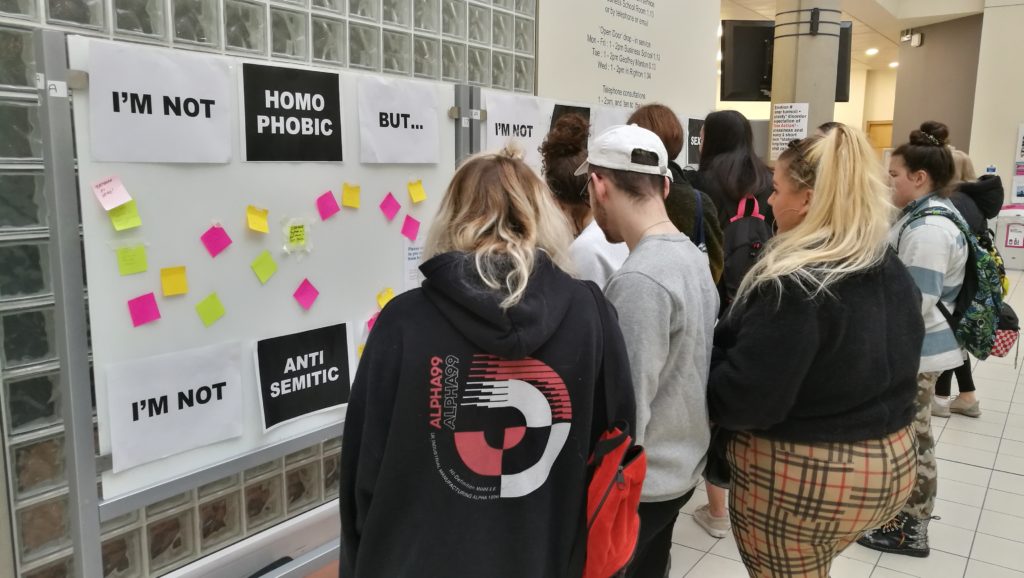 Manchester Met’s Arts and Humanities Faculty Student Showcase launched this week with the temptation of free food, alongside an opportunity to view a variety of challenging and poignant works from current students.

Centred around the contemporary theme of Masculinity, Femininity and Equality, the projects on display ranged from evocative to playful and intelligently self-aware. Since the food fair introduced the week-long event on Monday, a constant stream of students, staff and visitors have viewed the showcase in the atrium of the Geoffrey Manton building.

On Monday, many spectators were drawn to a wall of whiteboards, which encouraged their participation. Decorating the edges of this wall were the words “I’m not,” followed by “but…” splitting the writing on black sheets of paper was the context: “Homophobic, Racist, Sexist, Anti Semitic, Islamophobic.”

Many audience members were bemused by the bluntness of the piece, others disgusted. Every so often, someone would add their own note to the wall, evolving the tapestry and shining light on the unfortunate fact that intolerance is very much still an aspect of many people’s lives.

Moving through the atrium, the sheer variety of interpretations for the theme becomes clear. Fine Art student Jennifer Poppy Wen Mei Leaver’s display, ‘Sojourner’, serves to explore the relationship between cross-cultural identity and culture, paying attention to how “diaspora and hybridity affect the ways in which we perceive our reality”.

The strikingly beautiful piece is presented as printed cotton on canvas, providing an alternate and emotive representation of Agnolo Gaddi’s ‘Madonna Enthroned with Saints and Angels’ through the lens of Jennifer’s own cultural heritage.

She explains: “Sojourner is a Hebrew word, used in the Bible to describe a stranger, to portray how diaspora has influenced my identity: a sense of not belonging, the foreign and familiar.”

Jennifer hopes that her work will connect particularly with those from a similar cross-cultural background, proudly exclaiming that in finding herself without her own cultural community, she has gone on to create her own.

‘The Odd One Out’, by Animation student Anna Papadopoulou, takes an almost satirical approach towards the theme of the showcase. Utilising the style of an interactive children’s cartoon, Anna presents a series of scenarios in which the audience is prompted to select what doesn’t belong.

Starting with innocent concepts, such as species of fish, the animation then abruptly takes a more challenging tone. The audience is asked to pick whether a man or a woman doesn’t belong on Earth. With both answers shown to be wrong, Anna highlights the objective ridiculousness of divisiveness based solely on gender. Simple and effective, the chosen medium of a children’s cartoon further highlights how intolerance and division is downright remedial.

With many more pieces on display, tackling a range of important topics, from challenging stereotypes through differing perceptions to the origins of feminine iconography, the showcase is an enticing prospect for any curious mind or appreciator of the arts.

The displays will remain in Geoffrey Manton’s Atrium until Friday 22nd March.