You are here: Home / Culture / News / Manchester Pride 2019: Marching Towards A Future World of Equality﻿ 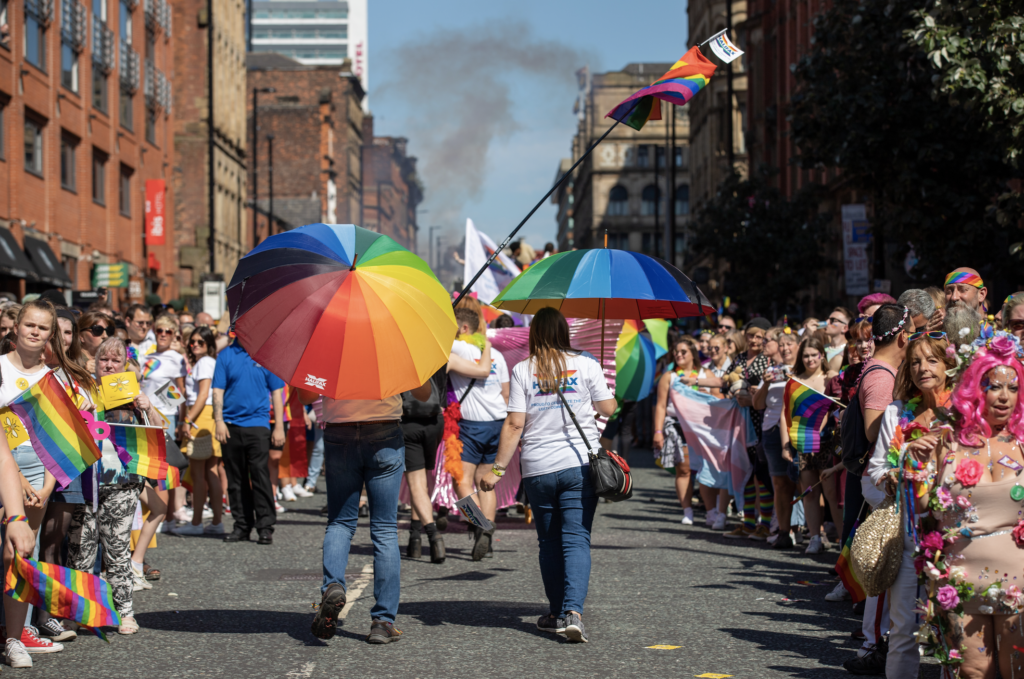 Thousands of people unite in the streets of Manchester to celebrate the LGBTQ+ community over the August bank holiday weekend.

This year’s Pride celebrations kicked off on Friday, followed by the main parade on Saturday, performances from this year’s headliner Ariana Grande on Sunday and an emotional candle-lit vigil on Monday.

All four days of Pride are full of colours, live performances and excited crowd celebrating the LGBTQ+ community and march for equality.

The biggest expectations are on Ariana Grande who returns to Manchester for the first time after the terrorist attack at her concert in 2017. You can feel a sense of rejoice and sympathy towards Ariane in the air at her concert.

Fans are supportive and emotional, as Ariana struggles to contain her own emotions throughout her half an hour set. During the performance she says to the crowd: “Thank you so much for accepting and celebrating me the way I’ve always celebrated you guys.”

Although everyone’s enjoying the parade, there is criticism after people are denied entrance to event spaces and of ticket prices in general.

“The ticket price for the Pride has caused lots of controversy. Ariana’s set lasted only 30 minutes and people have been denied entrance because of overselling. I’d much rather have something smaller but more convivial and less commercial,” says Pride visitor Baptiste Remembert, who’s been performing as a drag queen Muzet in Manchester for one year now.

“What I love about Manchester scene though, is that everything is really close by and easy to access,” he adds.

You’re one of the biggest performers at this year’s Pride. Can you tell us about the beginnings of your drag queen career – when did it all start?

“I started initially because of watching the women in my family and how fabulous they are. Professionally, I started drag in November 2018, but prior to that I’ve been doing it for years and years!”

What’s your source of inspo when it comes to the variety of the amazing makeups you create? Is there a drag queen on the Mancunian scene that inspires you?

“I take my inspiration from literally everything around me all the time. I try to keep my makeup very glamorous with a little twist. I adore full drag makeup, some would use the word ‘heavy’, but I just call it a light glamorous look! ‘Insidious glamour’ is what I would call my style really.”

“In terms of queens I admire? Absolutely all of them! Every single person who steps out and does what we do, I admire and appreciate.”

What is it that you absolutely love about being a drag queen in Manchester?

“The scope it gives you to really push yourself – it does to me! I’ve noticed since doing drag, a lot of people really look to the queens for permission to be fabulous – although everyone has it in them, it’s nice to help to bring it out!

“The drag scene is an integral part of the community, and it honestly really inspires me and makes me proud. When people are struggling with issues, people really do come to the queens to lighten the load. Without the queens, it would likely be a very different vibe. Drag is the rhinestoned pillar upon which the LGBTQ+ community lean.”

What were your impressions of this year’s Pride?

“It has been beautiful. It’s been a different vibe in my opinion, everyone has seemed a little more mature. It’s felt a lot more family orientated this year. Lot of us can’t or don’t speak to our blood families, me included; so it’s amazing to have our chosen family around, where we can truly remember why we even celebrate.

“What I find amazing about the Pride in Manchester, is that we hold the vigil on the last day. A time to really look back and appreciate how far we’ve come and how far we do stroll have to go.”