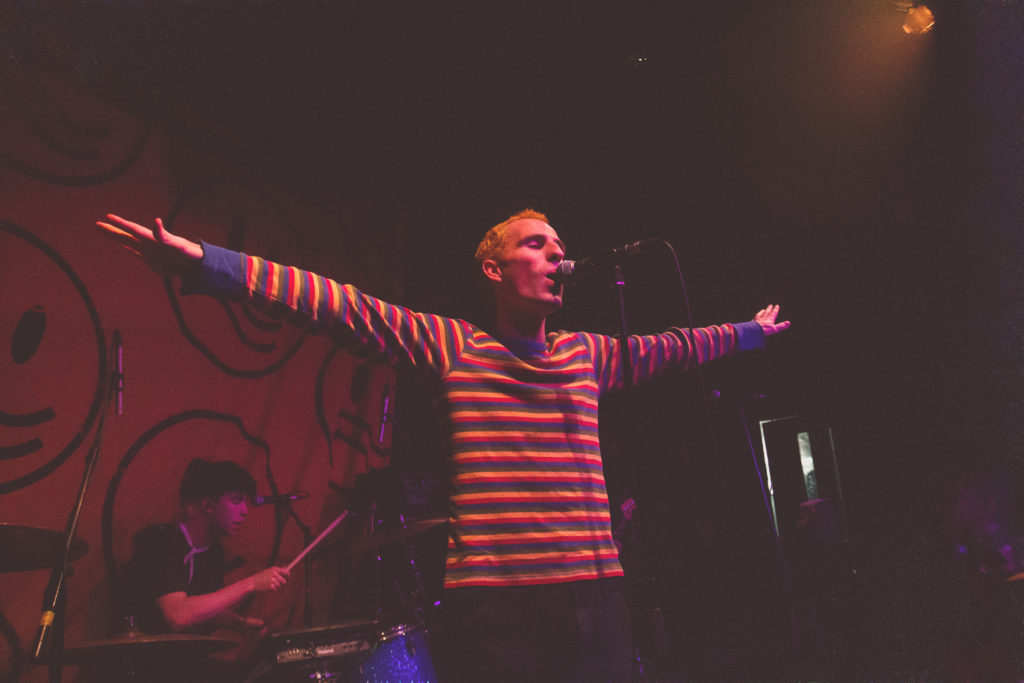 Close your eyes. It is summer 2013 again. Swim Deep have just released their debut album, Where the Heaven Are We, indie-Twitter is in full swing, the Digbeth B-town scene is thriving with the likes of Peace and JAWS putting out the best indie-tunes imaginable and all fans of the genre have been blessed with an array of summer tracks to vibe to. This was the atmosphere at Band on the Wall last Saturday night.

Starting the show early was Phoebe Green, an indie-pop queen, and her band. Not only was she under pressure opening for Swim Deep, but Green announced to the audience that her Nan was also present in the room, and later apologised for swearing in front of her on stage. However, Green and co are very familiar with Manchester after moving here, and this showed when she publicised that her family members weren’t the only ones she recognised in the crowd that night.

After featuring in her self-released debut album in 2016, Green’s track ’02:00 AM’ has quickly been recognised for the gem it truly is, with over 700,000 plays on Spotify. It was clear when hearing these songs live that she is a true self-made singer-songwriter. With Alvvays vibes, ‘Sagittarius’ had the small crowd dancing to synth-pop sounds. Green’s presence makes you feel nostalgic, like you’ve lived through the memories she’s singing about on stage, a skill most can only dream of possessing. Hearing songs from the debut album so early in the evening almost didn’t feel right – they hold an element of emo charm perfect for late-night listening.

Phoebe Green’s latest single’ Easy Peeler’ proved popular with the crowd and appears to be a zesty anthem about modern relationships and those who obsess over social media. After starting her career slightly askew by releasing a full-length album before any singles, it’ll be exciting to see what the next album holds. We can only imagine it will be just as compelling and charismatic as her performance at Band on the Wall.

Up next came headliners, Swim Deep, who bounced onstage with the energy one would expect from a band who have just returned from a four-year break. Touring off the back of their latest album Emerald Classics which was released earlier this month, they didn’t hold back from giving the crowd the classics. Opening with ‘Francisco’ from their debut album, the crowd were buzzed. It felt like 2013 again as the hardcore-fans sang from the top of their lungs.

Although the band has had a couple of changes in the line-up, it’s hard to deny the chemistry on stage between them, especially with OG’s Austin Williams and Cavan McCarthy who kept glancing at each other as if to say, “look at this welcome back”. ‘0121 Desire’ had the floor of the venue bouncing along with its 90s dance music vibes and the crowd were especially pleased when Austin mixed the lyrics up by singing “0-1-6… 1 desire”.

Swim Deep powered through their set despite an array of technical difficulties, though the crowd didn’t seem to mind when the opening riff to the ever-emotional ‘Soul Trippin’ begun to play. Their set felt how you would expect all gigs to feel – carefree, energetic and nostalgic; something which clearly resonated with the audience, based on their reaction.

Shuffling through their extensive back-catalogue, Swim Deep’s setlist was a perfect mix of old songs and new. ‘Bruised’ proved to be one of the most popular songs from the new album and had the crowd bopping. However, this was nothing compared to dance-anthem ‘Fueiho Boogie’, which saw fans climb on each other’s shoulders and enjoy the 8-minute rave, especially when Cavan and Austin stage-dived into the crowd.

The crowd remained as rowdy as ever, even when the band pull out dream-pop hit, ‘She Changes The Weather’. If you think that this song can’t be moshed to, then the Manchester crowd would prove you wrong. Limbs were flying everywhere in the small venue – it was quite surprising that a stage invasion didn’t occur. Swim Deep ended on a high with hit track ‘King City’, which got the whole crowd dancing. Overall, the gig gave off Summer festival vibes in a dark room in the middle of autumn, which is exactly what we had wished for.