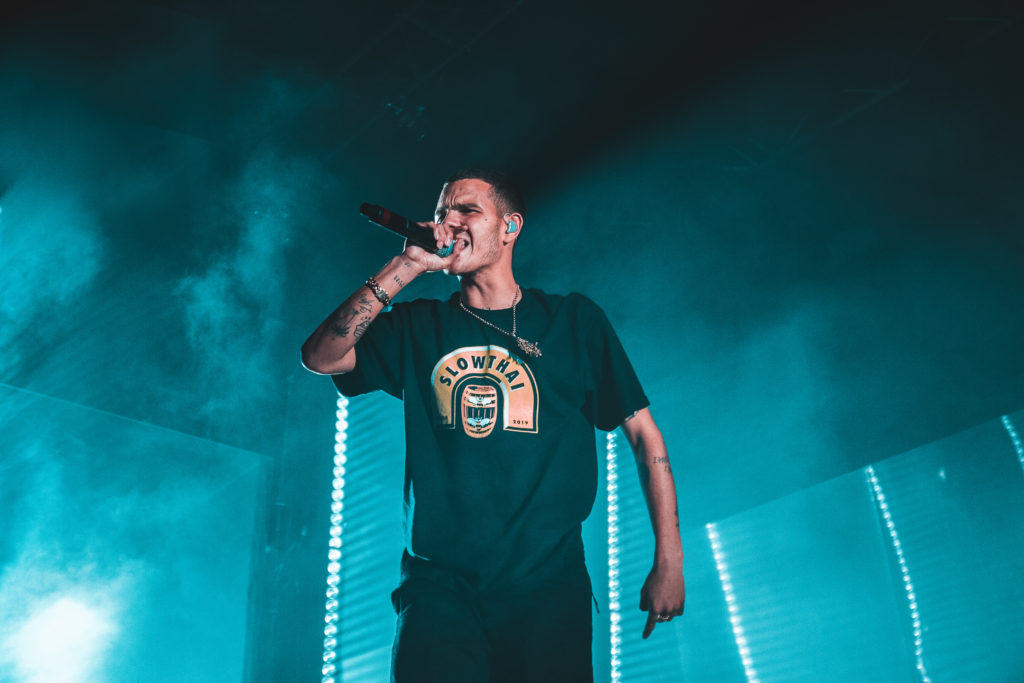 After releasing his debut album Nothing Great About Britain in May this year, slowthai has quickly been rising to popularity with his sardonic views of politics and the patriarchy.

slowthai (aka Tyron Frampton) made headlines last month with his performance at The Mercury Prize awards in London, where he brought a dummy of Boris Johnson’s severed head on stage for the recital of his popular song ‘Doorman’. During the performance, Tyron sported a t-shirt that stated ‘f*ck Boris’ – the design making a mockery out of the Prime Minister. The BBC was certainly not impressed, with the host Lauren Laverne making it clear they were “his own views”. However, the stunt only furthered the anticipation of what slowthai was going to bring to his sold-out show at Manchester academy.

The title of the tour itself shows what kind of man slowthai is – one of the people. The ‘Bet Ya a £5er Tour’ priced tickets at, you guessed it, five English pounds. With gig ticket prices becoming increasingly expensive as labels begin to realise what people will pay to see their favourite artist, a lot of people have been priced out. It was therefore so refreshing to see an artist stand up for his fans. slowthai even filled up his guest list spots for each night of the tour by giving them away to followers on Twitter.

Adorned in his own merchandise, Tyron arrived promptly on stage at 9:00 pm along with his hype-man, Kwes Darko, one of the main producers on his debut album. Opening with title track ‘Nothing Great About Britain’, the chaos soon ensued. slowthai, with his rap-come-punk-rock music, managed to pull in a contrasting crowd that harboured a strong community spirit feeling, reminding the masses that everyone was at the gig for the same reason – the music and the joy it brings.

‘Drug Dealer’ proved to be a popular hit with the crowd as fans tried to keep up with Darko and Tyron’s fierce timing, chanting along with the lyrics ‘drug dealer what else can I do?’. The stage was soaked in blood-red lighting and the duo was joined on stage by slowthai’s new mascot, ‘The Crack Rabbit’, whose eyes light up red and ears bounce up and down. slowthai’s comedic showmanship didn’t end there, however. Masked crusaders later rolled up, holding plastic guns that fired tea towels with slowthai’s face printed on at fans grasping for a bit of free merch. A man of the people for sure.

Before the track ‘Gorgeous’, Tyron hinted at his socially conscious presence. With the stage set up consisting of mirrors lined-up as a backdrop, slowthai cracked jokes before suggesting the bigger meaning behind his album: “These mirrors are here to show you how good I look from behind… Not really, they’re here to show you what is great about Britain”. Although his lyrics can be full of anger at a capitalist society, slowthai is really all about the idea of brotherhood, love and connecting as a community.

Following in the footsteps of other artists, slowthai welcomed a member of the crowd on stage for a duet of his song ‘Inglorious’, which features Skepta on the recording. A young girl charismatically took to the stage to fill in Skepta’s shoes live. It was wholesome, to say the least, as the pair connected on stage and the crowd fully supported them with cheers.

It wouldn’t be a slowthai show unless Tyron was effortlessly controlling the crowd, and he did, asking them to part straight down the middle to allow ‘The Crack Rabbit’ to run up and down the full length of the academy. The masked crusaders also joined in the fun by using water guns to spray the crowd and force them to part ways, which seemed like a great idea until slowthai whipped everybody into forming a circle pit on a slippery wet floor, resulting in many falls and trips.

The only flaw of slowthai’s performance was how he restarted songs if the crowd wasn’t giving their full energy, a common tact amongst rap artists. Yet, at least it allowed the crowd to hear some of their favourite tracks multiple times.

Ending the night with ‘Doorman’, a song that doubles as an angry tune about not being allowed inside a nightclub and having the doors of opportunity slammed shut in your face for being working-class. The crowd clearly resonated with the lyrics and had confidence in Tyron, an artist who sends messages of defiance and gives the middle finger to nationalism and Britain’s toxic politics. slowthai’s songs are smart and charming, yet hit hard – even more so when performed with professional high-energy, fast-paced and pristine momentum. Tyron tears down blue-passport-Britain whilst supporting and raising up those from working-class and diverse backgrounds – “Raised in Britain, no you isn’t“.

As the crowd filtered out of the venue they continued to keep the infectious energy flowing as they proceeded to chant the words to ‘Doorman’. “Blue lights, double vision” echoed around the hallway of Manchester Academy and into the night.

It’ll be exciting to see what slowthai achieves next, perhaps many more award nominations and the utmost potential to headline Manchester’s very own Parklife Festival.