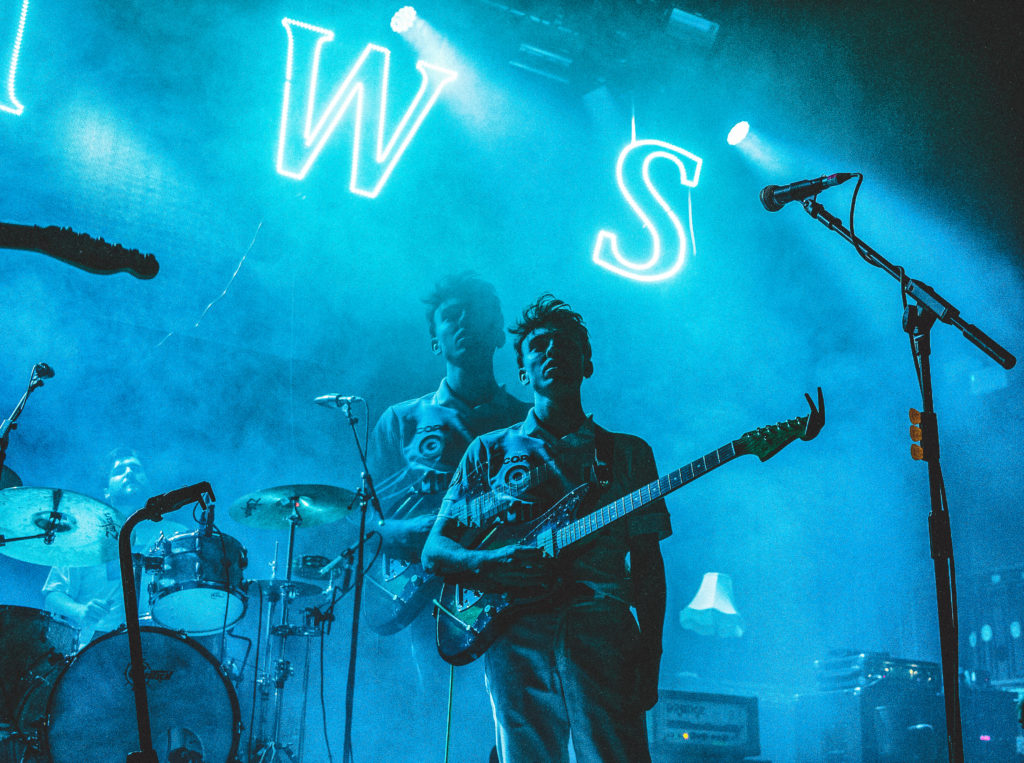 Any fan of indie or rock should know who JAWS are by now and if you don’t, it really is time to get to know. After recently releasing their latest album, The Ceiling, it is safe to say JAWS are very much sticking around. We caught the Birmingham three-piece at their Manchester show of their four date UK run.

With an early set time of 8:30pm, many gig-goers showed up with little time to spare before the band took to the stage. The venue was packed out on the floor with a small amount of people on the balcony due to most of the fans wanting to get involved with the chaos that was set to ensue. With this being JAWS’ biggest headliner to date, we were excited to see the difference between this gig in the 1500 capacity venue we were standing in then, compared with the last Manchester show which could hold a maximum of 620 people.

Looking / Passing was seemingly the perfect song to open with, a staple track from the new album, it showed off JAWS’ developed sound to the crowd and they seemed to soak it up. As the song came to a climax the crowd some responded with push-pits whilst the rest jumped up and down, singing along to every word, indicating the Manchester crowd were fully behind the new album.

Followed by a fan favourite ‘Right in Front of Me’, a single from their previous album, Simplicity. It was apparent that the crowd had that Friday feeling to its full effect. JAWS’ performance remained tight and consistent and the energy from the crowd never faltered even with slower, more emotional tracks such as ’17’.

The set list featured 9/10 songs from the new album, missing out the slowest number ‘January’, although it may have been needed to give the crowd a break from their own energetic performance. In spite of the set list consisting of mostly new songs, you could tell the crowd were not disappointed, especially during numbers ‘Do You Remember?’ and ‘Driving at Night’ which were clearly favourites from The Ceiling.

However, you couldn’t deny the spirit from the crowd when songs from previous albums were performed such as ‘Just a Boy’, ‘Stay In’ and ‘Be Slowly’, proving how important it is for bands not to put the classics to rest.

The way The Ceiling was performed live felt just right for JAWS. The new album sees their sound as more mature and honest. For anyone who has been following the band since their release Milkshake in 2013, the new songs are hugely relatable. JAWS could have easily recreated the sound of their prior two albums, but we are glad they didn’t as we love this heavier, yet still dreamy, sound. A hot pick from the new album being ‘Please Be Kind’.

A highlight for most would have been the encore of ‘Gold’, a favourite from Be Slowly. It wouldn’t feel right to end the set any other way.

You can purchase The Ceiling here, which we would highly recommend.