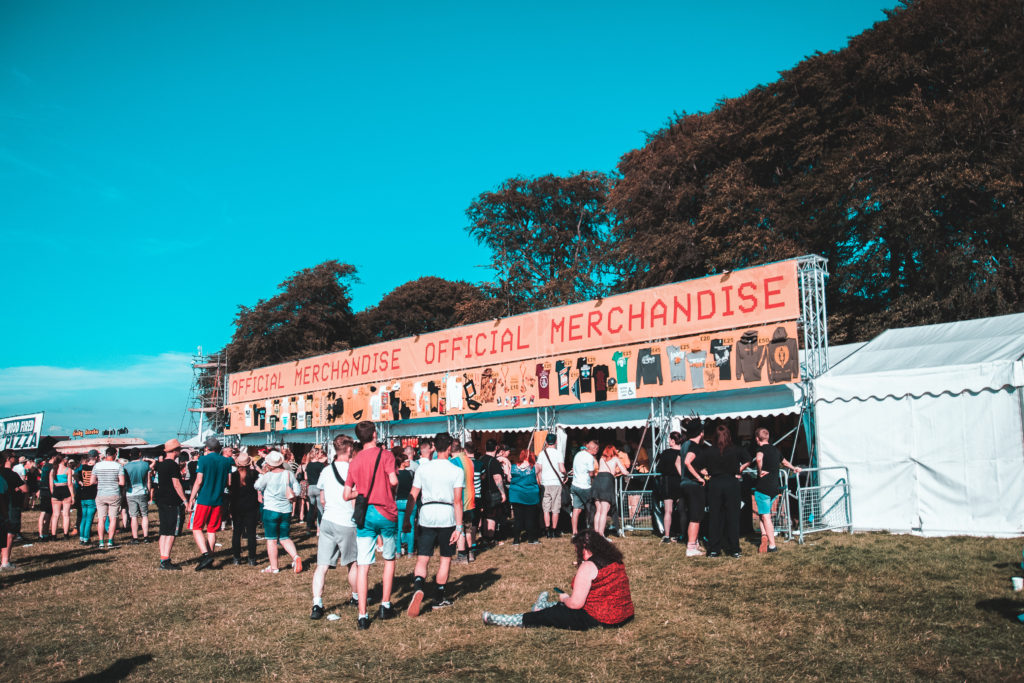 After all the excitement of yesterday, we decided to start our day of with alt-pop Swimming Girls over on the BBC Introducing Stage which we deemed would be a more chill affair, however, we were very wrong. Swimming Girls pulled in a huge crowd which would be fit for a mid-afternoon slot on the Festival Republic stage. BBC should have no need to introduce this band as it seems like a lot of people are already familiar with their catchy dark dream-pop sound.

Swimming Girls have tracks that have a cinematic effect that would fit perfectly in the background of an episode of Twin Peaks. Opening up with their hit ‘Back of Your Car’, it felt like we were in a movie. Swimming Girls’ music will be the soundtrack to the future generations adolescent years. Vanessa successfully captivated the crowds attention and stopped festival-goers in their tracks as they were planning on heading towards other stages. Although their music is more fitting for a basement show, their set was thoroughly enjoyable whilst dancing in the sun at one of the best festivals (in our humble opinion). We are excited to see what Swimming Girls do next and are very much looking forward to a dreamy debut album.

Next up we caught a different kind of girl, Sea Girls. The kings of sing-a-long’s, Sea Girls, are one of the most-loved indie-pop bands right now and it is really showing as their fan-base is getting bigger and bigger. It wouldn’t be a Sea Girls set if there wasn’t people on shoulders singing every word back at the band, there is no favourite song as every single on their three currently released EP’s could be coined their best. We are very much looking forward to when they finally release a debut album.

Sea Girls covered most of their repertoire, however, when ‘Too Much Fun’ and ‘All I Want To Hear You Say’ was played, the crowd were wild with high spirits dancing along to the infectious tunes. One of our favourite things about seeing Sea Girls live is seeing how much they enjoy themselves on stage especially the guitarist, Rory Young, who moves energetically throughout their set effortlessly. With huge ‘The Wombats’ vibes, we can see Sea Girls climbing their way up festival line-ups with no difficulty and we hope to see them on the main stage next year.

No Rome – The new prodigy on the same record label as The 1975, Pale Waves and Wolf Alice. After touring with The 1975 for the past 9 months, it can be seen looking around the Festival Republic tent that those shows were crucial to introducing No Rome to the world. Following the release of their second EP ‘Crying In The Prettiest Places’, a 6 track masterpiece of pop-inflected R&B, we see No Rome on many popular festival line-ups.

Opening with ‘Do It Again’, their debut single release. A catchy melancholic way of story-telling which had the crowd singing along – ‘she said she wouldn’t do it again’. This song definitely had the potential to get stuck in many heads for the rest of the day. With songs that take a futuristic turn, their music is the perfect soundtrack for the members of the millenialls in the crowd. No Rome’s set was the perfect way to wind down for 30 minutes with their shoegaze R&B sound. Ending the set with ‘Narcissist’ which features The 1975, this song proves to be the most popular with the packed-out tent which is no surprise due to The 1975 headline slot on the main stage later that evening. Perhaps the crowd were hoping for an appearance of Matty Healy himself for this single.

Next on The Pit stage we caught, Dream State, a 4 piece band who are bringing back a newly defined melodic-hardcore sound and gaining a lot of attention because of it. They reminded us of a heavier-version of Paramore for the new generation of emo’s and scene kids. Dream State will act as a gateway for getting a lot of young people into heavier and alternative music like Paramore and You Me At Six were for those who were in their school years between 2007 and 2012. However, Dream State are not just for the young ones, CJ has remarkable vocals alike to Architects’ Sam Carter in which she sings relatable lyrics to those in our age group.

With only two EPs to their name, we are pleasantly surprised at the following they have brought to The Pit stage. With their electric live set full of energy, we are certain that their debut album is gonna give them nothing less than a greater success. CJ makes a great role model for every person in the crowd as she sings openly about her struggles and gives her all on stage, we have missed seeing such a emotional and raw performance in this genre. A highlight of the set was witnessing their launchpad track ‘White Lies’ in which the crowd mirrored the band’s vitality and sung the lyrics with a volume that should have been deafening. With a six-date long UK tour beginning in late October, we are excited to see them again and what they gift to us next.

Joji, one of the most hyped artists in R&B right now, he takes the genre and twists it with his lo-fi bedroom vibes and sample-driven production. We’d be lying if we didn’t say Joji was the artist we were most looking forward to seeing this weekend. After ‘BALLADS 1’ was released in late 2018, Joji’s popularity has quickly grown escaping his previous acclaim to fame as Youtube star ‘Filthy Frank’. Joji’s music is emotional, trap-influenced and cleverly composed in a bold way.

Joji’s personality shines as he makes his way onto the BBC Radio 1 stage and was met with a tent that was rammed side to side with fans eager to catch a glimpse and enjoy an early-evening sing along. Opening with ‘YEAH RIGHT’, one of the most popular songs on his most recent album, the crowd erupts, fans climb onto each other’s shoulders to deliver their own performance as they sing the lyrics in time with the music and spread their arms wide. Later comes ‘Sanctuary’ which can only be described as a cloud rap infused, passionately-produced love song. The latest single Joji has released and it is thoroughly setting the tone for his next album which seems to be more hopeful than the context of his previous songs. Joji’s fun and wonderful side shines through as the music video for the single plays on a screen in the background and can be likened to an 80s sci-fi film.

Despite the chosen subject-matter of Joji’s lyrics, he always looked untroubled and joyous on stage as he threw himself into cartwheels before the drop on his song ‘ATTENTION’. A little cover of ‘You’ve got a friend in me’ had the crowd reminsicing to watching Toy Story for the first time whilst looking at Joji in awe. Ending the set with his biggest track ‘SLOW DANCING IN THE DARK’, he teased the crowd by singing a different version of the track before launching into the ballad that it truly is. We can’t wait to see what Joji brings to the table next, hopefully a long-awaited UK headline tour.

Next up we caught Pale Waves, Manchester’s next arena act. Another artist on the Dirty Hit roster, it sure looks like they’re taking over festival line-ups with the best new artists. Heather Baron-Gracie is straight to the point as she struts out confidently onto the BBC Radio 1 stage and opens with ‘Eighteen’, the first track from their debut album ‘My Mind Makes Noises’.

We can see why they call themselves goths when you take a look at their stage attire. Although the band’s lyrics are quite emo, the music is very much pop. There is something a little bit unnerving behind their sad lyrics whilst their music sounds so happy but we love it anyway. After the first song the crowd gave a huge welcoming applause to the Manchester quartet and Heather casually asked them, ‘What’s up Leeds?’ like it was no big deal that they were playing one of the best slots at the festival for any upcoming artist.

Pale Waves fly through a set with a mixture of songs from their limited backlog of music, one EP and one debut album. It seems as though the crowd were most hyped up for their songs of their EP ‘All The Things I Never Said’ such as ‘The Tide’ and ‘My Obsession’ which they introduced as a ‘big emo tune’. We can tell who in the crowd were the biggest fans of Pale Waves just by looking who was mimicking the way the girls in the band style their makeup. Pale Waves are blowing up and we’re excited that a band with two female members are getting so much attention. The music scene is improving with its welcoming of female artists and we love to see it. Pale Waves are set to go on a UK tour this month but we are hoping they find some time to release some new dreamy goth pop tunes.

Last but certainly not least – The 1975. We are thrilled they finally got to return to Leeds Festival with a well-deserved headline slot on the main stage. With the buzz around their new single ‘People’ which was released on the Thursday all weekend campers arrived, it was only fitting that they opened their set with this metal-infused banger, only after introducing themselves by playing ‘The 1975’ by The 1975 of course. ‘People’ proves The 1975 are more than just a pop band and we hope they continue this Marilyn Manson x Minor Threat vibe on their soon-to-be released fourth album ‘Notes on a Conditional Form’.

‘Give Yourself a Try’ and ‘TOOTIMETOOTIMETOOTIME’ popular tracks from their latest release ‘A Brief Inquiry Into Online Relationships’ had the crowd fiercely singing back the lyrics as Matty strutted about the stage clearly in his element. Matty couldn’t help but exclaim how ‘mental’ it was that they were headlining and continued this humble attitude throughout their set stating it was ‘the biggest moment of their lives’. Headlining Leeds Festival must have been truly special to the Wilmslow quartet as it is the biggest festival closest to where they grew up and spent their childhood years.

‘Loving Someone’ brought along with it an emotional speech about the bands time spent in Dubai recently in which Healy, despite anti-gay laws, kissed a fan in the crowd. Matty knew he was preaching to the choir about how ‘governments are dickheads’ but it is The 1975’s political stance on these things which is a part of the band we absolutely adore. We can’t deny we love to hear it.

Throwing it back to 2013, ‘Robbers’ was definitely a highlight of the set in which many members of the crowd climbed onto each other’s shoulders to catch a glimpse of the band and sing along to this ‘True Romance’ inspired single. Continuing with the love song theme, ‘Fallingforyou’ from their third released EP ‘IV’ came next in which Matty described as a ‘deep-cut’ track and he isn’t wrong. Fallingforyou never fails to give members of the crowd goosebumps with Healy’s raw and emotional presence on stage during that track.

The 1975’s headline slot was nothing but monumental and unforgettable. The perfect artist to headline in these uncertain times, a band that is very much suited to the messages Leeds Festival had been sending out throughout the weekend of being aware of the extinction rebellion as well as creating safe spaces for women and those who are part of the LGBTQ+ community. We can’t wait to witness what The 1975 do next and we are very sure The 1975 have their sights set on a Glastonbury headline slot next and we believe they would fit that title perfectly.