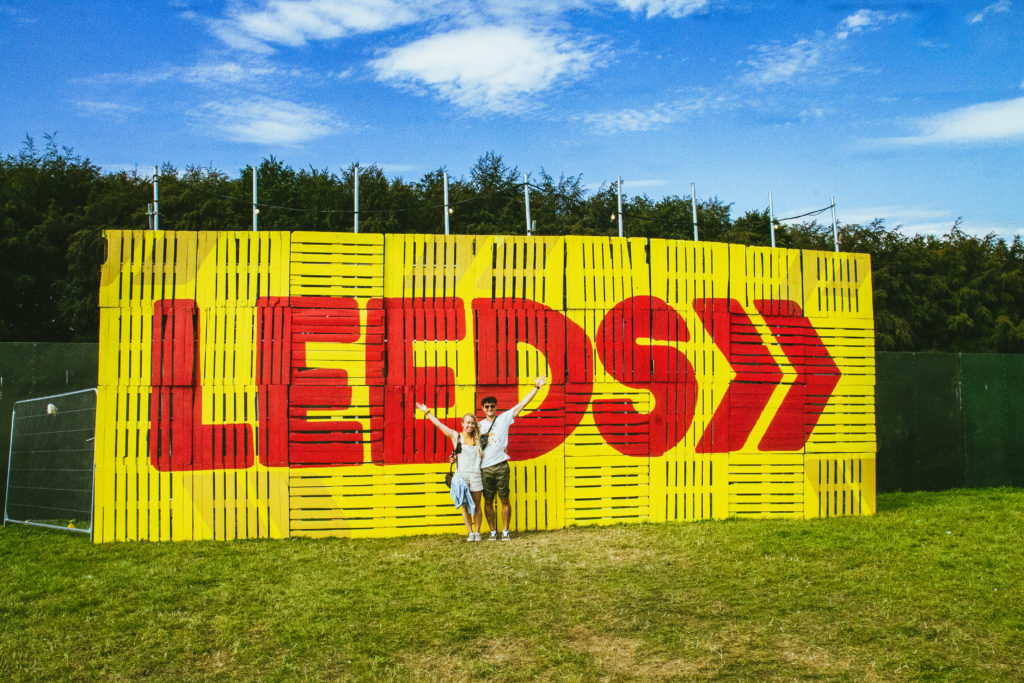 This year at Leeds Festival, something felt different to previous years. For starters, the weather forecast lived up to its predictions and the baking sun shone down on festival-goers all weekend. Recycling bins are seen in all directions, extinction rebellion video messages are playing throughout the festival highlighting the climate and ecological emergency we are currently living in and posters everywhere are placing a spotlight on the significance of making the festival a safe space for women.

Leeds Festival wasn’t just about the music this year: it was guiding the future generations by sending important messages of climate change and equality and we were truly in awe of it. As always, the organisation of the festival was outstanding which is something you would expect as this year marked the 20th anniversary.

The first band to open up the BBC Radio 1 stage for the weekend was CHILDCARE. Since forming in 2016, the band have been slowly working their way up festival line-ups with their art school punk sound. Their on stage aesthetic was exactly how we imagined it as the band came together onto the stage wearing a mask similar to their debut album cover ‘Wabi-Sabi‘.

One of our favourite things about CHILDCARE is their sense of humor, they do not take themselves too seriously and it shows as the singer, Ed, nonchalantly strolls around the stage. A highlight of their set was their performance of ‘Sugarcane’, an infectious song that we couldn’t help but continue to repeatedly sing the chorus of as we headed to the main stage to see the next chosen act of the day.

Next up we caught Mayday Parade who were the third act of the day to take to the Main Stage. The crowd showed excitement as the band opened with ‘Oh Well, Oh Well’, an opening track from their self-titled album that perfectly shows off their ability to write love-torn ballads. The set continued on with the emo rock songs fans loved best such as ‘Jamie All Over’ and ‘Jersey’.

However, fans seemed left disappointed as the set list was only six songs long and included a cover of ‘Mr Brightside’ by The Killers. Although this song is a bop, the only people who probably enjoyed this cover were those who were soaking up the Main Stage sun without knowing who Mayday Parade were. We think many would’ve preferred to hear the nostalgic track ‘Miserable At Best’ which was the soundtrack to every break-up that took place in 2007.

Moving on, all fans of 2012 pop-punk flocked to the BBC Radio 1 stage to see The Story So Far. For fans who are well-versed with this band, it felt unusual to see them on such a large stage with a barrier and a large gap setting apart the fans and the band. It felt like a natural progression though, as their latest release ‘Proper Dose’ moved towards a more mature sound. However, we couldn’t deny the excitement we felt when they played old bangers such as ‘Quicksand’ and ‘Roam’ accompanied by a wave of crowd surfers reminding the sea of people that had gathered that The Story So Far is a long way from being over.

‘Welcome to Hotel Diablo’ – an eerie opening track played over the speakers whilst Machine Gun Kelly was waiting to take stage – was enough to make you feel like you were actually in a creepy hotel as the stage set up had gothic features alike to the Addams Family house. Propelled by the latest release of ‘Hotel Diablo’ that came out earlier last month, fans packed out the BBC Radio 1 stage to catch a glimpse of the Eminem-dissing rapper.

The explosive set was filled with energy and we especially enjoyed the performance of ‘Candy’ in which MGK threw himself off the stage and revelled in some fan intereaction. The set was unforgettable, reminding us of how diversely talented MGK truly is as he played a range of instruments on stage. He could be next to follow in Post Malone’s footsteps to be the next big headline act in 12 months time after performing a mid-afternoon slot.

Respectable rockers Frank Carter & The Rattlesnakes played an early evening slot on the Main Stage as if they were the headline act. They controlled the crowd effortlessly with a running theme of making their set a space for women to express themselves in a safe environment. Women only crowd-surfing during ‘Wild Flowers’ saw a sea of girls flow over the barrier and safely into the arms of security. The fun didn’t stop there as Frank instructed the crowd to open up mosh pits and declared them girls-only. The set still remained as rowdy as ever with Frank Carter’s raucous energy as he jumped around the stage and often launched himself into the crowd. The set ended with a grateful thanks to those making the festival run smoothly and a massive anthemic singalong to ‘I Hate You’.

Every fan of indie punk in 2013 will remember FIDLAR for their self-titled debut album featuring songs such as ‘Cheap Beer’, ‘Wake Bake Skate’ and ‘Cocaine’ which soundtracked many unforgettable summer nights in 2013. We guess a lot of people were also craving this feeling of nostalgia as they packed out one of the hottest stages at the festival – The Pit.

Songs of their latest album, ‘Almost Free’, proved to be popular such as ‘Alcohol’ which seems to be a more mature version of ‘Cheap Beer’ due to its lyrics about Zac’s complex relationship with drugs and alcohol. With the performance they gave on stage, it seems as though FIDLAR are wanting to be taken more seriously with their newer release. The set flew by and fans were left yearning for more.

A Day To Remember came back to the UK with just as much fun energy as we remember from the last time we caught them in 2017. Their long awaited return brought fans of all ages to gather at the Main Stage with a desire for tunes from their most loved album ‘Homesick’, yet all old skool fans were delighted when the band opened with ‘2nd Sucks’.

As always, ADTR brought the party to Leeds Festival with their classic tricks such as giant inflatable beach balls, fans being asked to crowd surf literally on top of each other and then calmed things down a little with a fan favourite, ‘If It Means a Lot to You’ in which the crowd climbed onto each others shoulders to belt out their own rendition of the classic.

With the sun casting rays over the crowd and the sound of people singing their most loved songs, the band truly made it A Day To Remember.

Enter Shikari stormed in from the beginning of their set at The Pit. After playing Main Stage earlier in the day we are surprised the band had any energy left, but that is Enter Shikari for you. Within the first three songs we had flames and confetti, although even without these added features we are sure the set would have had the same electrifying feeling. Rou Reynolds is truly one of the best performers of our time. Since taking on the Enter Shikari name in 2003, the band have rightly so climbed their way up festival line-ups with ease as their on stage presence is like no other.

Seeing Enter Shikari on a smaller stage later in the day felt special. With their messages of climate change and their strong stance on politics, there was a reason Enter Shikari were playing twice in one day with their set fitting with the messages Leeds Festival were also sending out this year. An unforgettable moment of the set was a performance of ‘Quelle Surprise’, a song from one of their most loved albums, ‘A Flash Flood of Colour’. We haven’t seen this song on the Enter Shikari set list since 2012 and we felt truly honored to hear it live again.

Emo-rock powerhouse Basement were up next on our list of must-see artists. Since the release of their latest album ‘Beside Myself’ late last year, Basement have seen themselves with an ever-expanding fan base and gaining bigger success which was highly noticeable when looking around the crowd of people gathered in the Festival Republic stage.

After seeing Basement packing out The Pit stage in 2014, it would be no surprise if in the next few years we see them filling a slot on the BBC Radio 1 stage with their maturing sound – Basement are embracing the mainstream. Although 4 out of 8 songs on the set list were from their 2012 release ‘Colourmeinkindness’, we felt the set was lacking from what made other Basement shows special, a peformance of ‘Crickets Throw Their Voice’ from their debut album. The song ‘Spoiled’ most definitely stole the show as a fan-favourite and although the stage barrier established a divide which was ill fitting for a Basement show, fans still crowd-surfed over it anyway.
We are left hoping that Basement will return to what they know best – their gripping, hard-hitting alt-rock sound. We wish we could have stayed in the ‘I Wish I Could Stay Here’ album era.

CHVRCHES cast a spell on the Leeds Fest audience late on the Friday night, with enchanting vocals as singer Lauren Mayberry twirled onto the stage. It must not be easy clashing with one of the biggest names in rock but CHVRCHES came out owning the stage and deserved the packed out tent they received. We witnessed a headline act in the making. We could not help but feel the happy energy as we followed in Lauren’s footsteps, whirling around with our hands in the air with the rest of the crowd who followed suit. The set list was strong all the way through starting out with ‘Get Out’ and following into ‘Bury it’. One of the highlights of the set was ‘Mircacle’ from the latest album ‘Love is Dead’ which was released on Virgin EMI records over a year ago, the song has an uplifting feel and when performed live we can’t help but feel hopeful.

Bastille taking the headline spot on the BBC Radio 1 stage is something you could tell dedicated fans had been long awaiting for. We knew the set was going to be a party when a large group of backing dancers and vocalists joined the indie-pop four piece on the stage for ‘Quarter Past Midnight’, a song from their latest album ‘Doom Days’ released in June this year. The stage set up was nothing less than impressive and had no problems selling the illusion that we were standing in the middle of a house party on a summer’s night rather than a sun-scorched field.

The set was heavy loaded with songs from their latest release but songs from their debut album ‘Bad Blood’ were not forgotten. It felt nostalgic hearing hit songs – ‘Things We Lost in the Fire’, ‘Of The Night’ and ‘Pompeii’.
A highlight of the set was the performance of their collaboration with Craig David on ‘I Know You’ as well as their song with Marshmello ‘Happier’. Bastille are thriving with full-force and with the confidence we can see from Dan on stage we can see that they know it. Bastille are unpredictable, magnificent and kings of bringing the party.