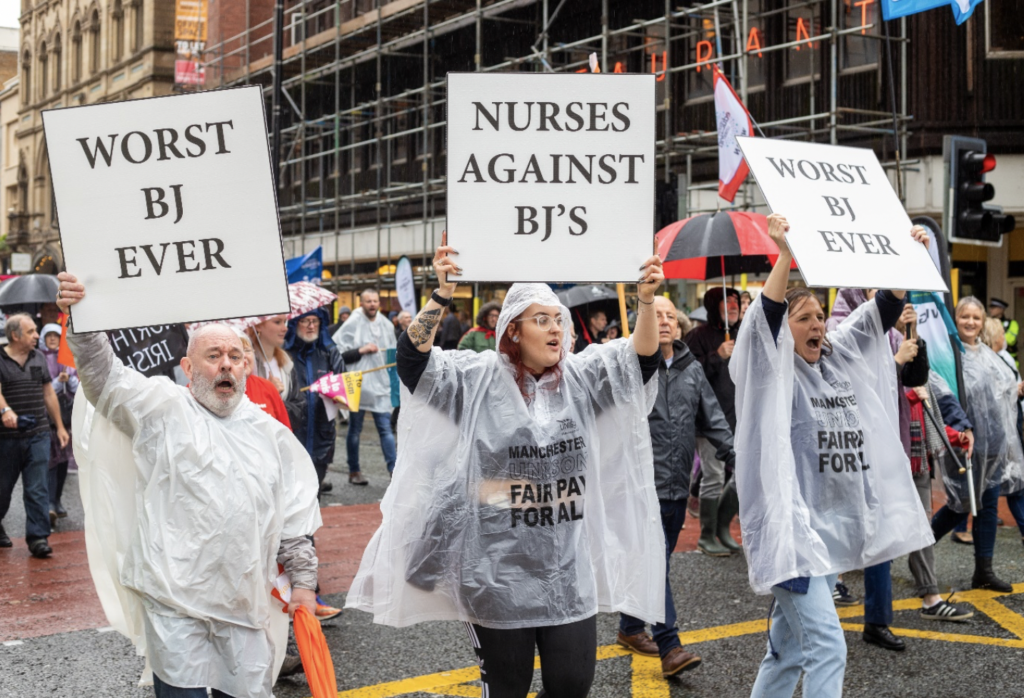 ‘Don’t Trump our NHS’, say the attendees’ posters at the largest “Shut Down the Tories” march. It’s September 29, a typical rainy Mancunian Sunday as thousands gather to protest against the decisions of the Conservative government.

Remainers united for a mutual cause

There’s a fair mix of people attending the march – young enthusiastic students wearing the blue berets with yellow symbol of the European Union, families pushing the baby strollers with small EU flags attached to them and Mancunian elderly proudly marching through the streets shouting “Tories out”.

Demonstrations start at All Saints Park and move towards Manchester Cathedral. There’s number of well-known campaigners and politicians attending the event, such as labour MP Richard Burgon or actress Julie Hesmondhalgh who is one of the speakers at the protest. “I’m here as someone who wants to live in a fairer, more equal, more peaceful, more just society,” Hesmondhalgh says. “We are never going to get these things under this shower.”

The protest responds mainly to the Conservative Party Conference which takes place right in Manchester Central Convention Complex, starting on Sunday. There are two events joined in one – Reject Brexit March organised by collaborating Manchester for Europe and March for Change, as well as national demonstration against the Tories called by The People’s Assembly Against Austerity. All of this results in thousands marching for brighter European future.

Protesters also point out the fact that the country is imbalanced, with 82 of the 100 poorest communities in England being in the north, according to new ‘index of multiple deprivation’.

Manchester Evening News publishes series of articles in favour of the protest, including the strong statement: ‘The north has had enough humbug, Prime Minister – we need actions, not words – it’s time to deliver.’

One of the EU citizens Jakub Bachna who works in Northern England art industry has spoken to us about how he thinks Brexit will influence young European artists who’ve come to work in the UK.

“I doubt that the fine art market would get affected, however the commercial side of art may or may not not experience a bit rough patch if there would be no deal Brexit. I do have lot of acquaintances that are EU citizens, but also from all other parts of the word, and what I can say is that Brexit doesn’t really scare anyone away whether they choose to stay or not. On the other hand, it does complicate things due to the new bureaucratic procedures that will apply.”

When asked if he’d personally join an anti-Brexit protest he shares doubts, commenting: “However, I do believe that marches are a tool that can lead to a social and political change.”

Did you join the protest? Have your say and write for aAh! Join the conversation over on Twitter @aAh_mag