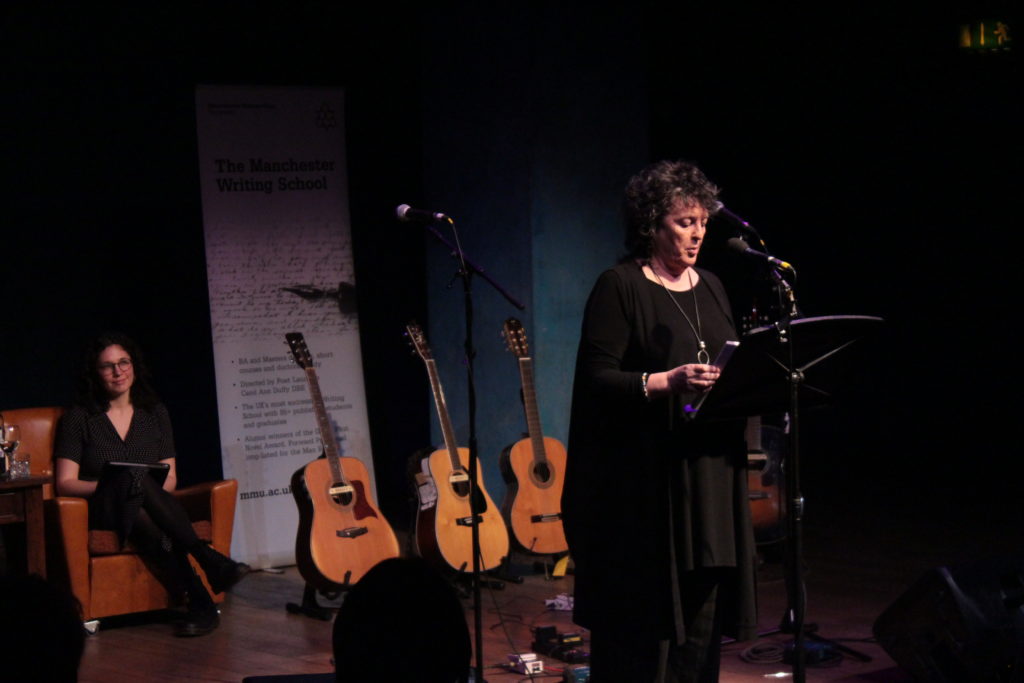 The 15th season of Carol Ann Duffy and Friends continued at the Royal Exchange Theatre, with its final evening showcasing three emerging talents alongside the captivating duo of award-winning poet Paul Henry and singer-songwriter Brian Briggs.

Renowned for its intimate showcasing and varied performers, the consistently sold-out reading event offers truly entertaining and nuanced spoken word performances. ‘The Glass Aisle’, introduced the audience to a unique heightened collaboration between poetry and music.

A familiar and sophisticated ambience greeted audience members as they entered through the house doors, courtesy of a live jazz band. The house lights dimmed to leave the rows of chairs in shadow, while the music transitioned calmly to applause as the event began.

“Happy new year, one and all,” Poet Laureate Carol Ann Duffy DBE began as she took to the stage. Taking a satirical glance at contemporary politics, Duffy opened with a performance of ‘The Ex-Ministers’, a poignant poem exploring apathy within the British political system: “We are nothing to them now, lemmings going over the white cliffs of Dover,” – an intriguing allegory which echoes somewhat uncomfortably within a firm basis in reality.

A soft cacophony of shock rippled through the audience, before being punctuated by a quick remark from Duffy. The resulting laughter balanced the tone of the room as house poet Mark Pajak was introduced.

“The first half of the night is devoted to showcasing the very best in emerging talent, and I am delighted to be sharing the stage this evening with Daisy Mitchell, Lauren Garland and Rachel Davies, all of whom I’ve had the pleasure to read and I can’t wait for you to hear,” Pajak said in his opening discussion.

In keeping with the theme of the evening, connecting people with various aspects of life, Pajak read a poem which he described as about an empty space, inspired by his own family folklore. 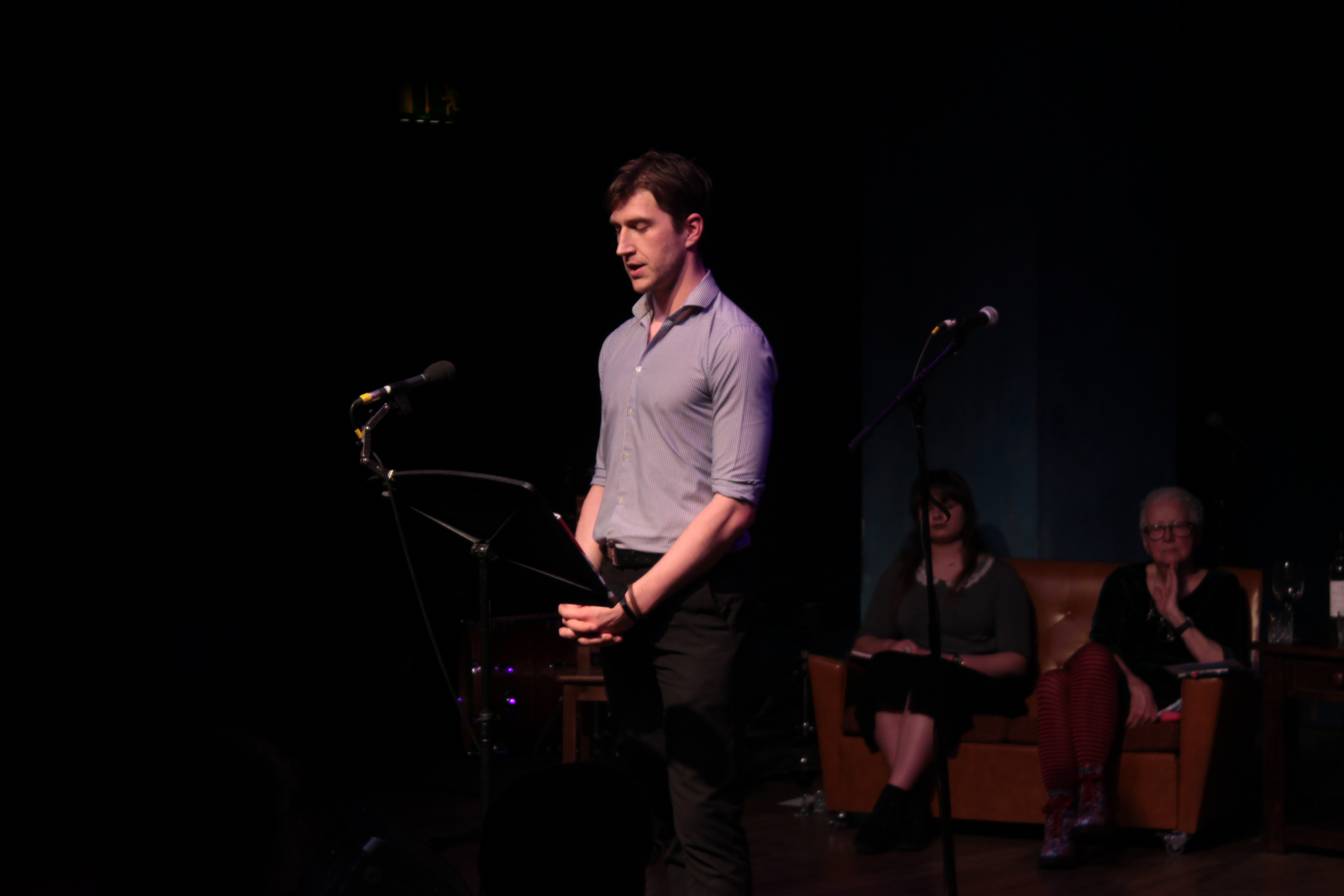 ‘A Set Place’ depicted the unconventional way in which Pajak’s aunt told her partner she was pregnant. His words brought forth vivid imagery of a cosy family dining room, an inviting environment before dropping a sombre twist on the narrative. The succinct description of objects around the house continued throughout, though with newfound meaning and inherent sadness explored in a haunting manner.

“Oh I love that poetry noise, that ‘mmmm’, I live for that,” Pajak remarked in response to the audience’s reaction as his finished his reading. A few thoughtful moments of silence passed, and then Pajak introduced Daisy Mitchell to the stage.

From Macclesfield, Mitchell was drawn to poetry from an early age, finding inspiration in exploration of the North Western peaks. After completing an MA in creative writing at Manchester Metropolitan University in 2018, Mitchell now lives in Didsbury, providing further opportunity for places to explore and write about. 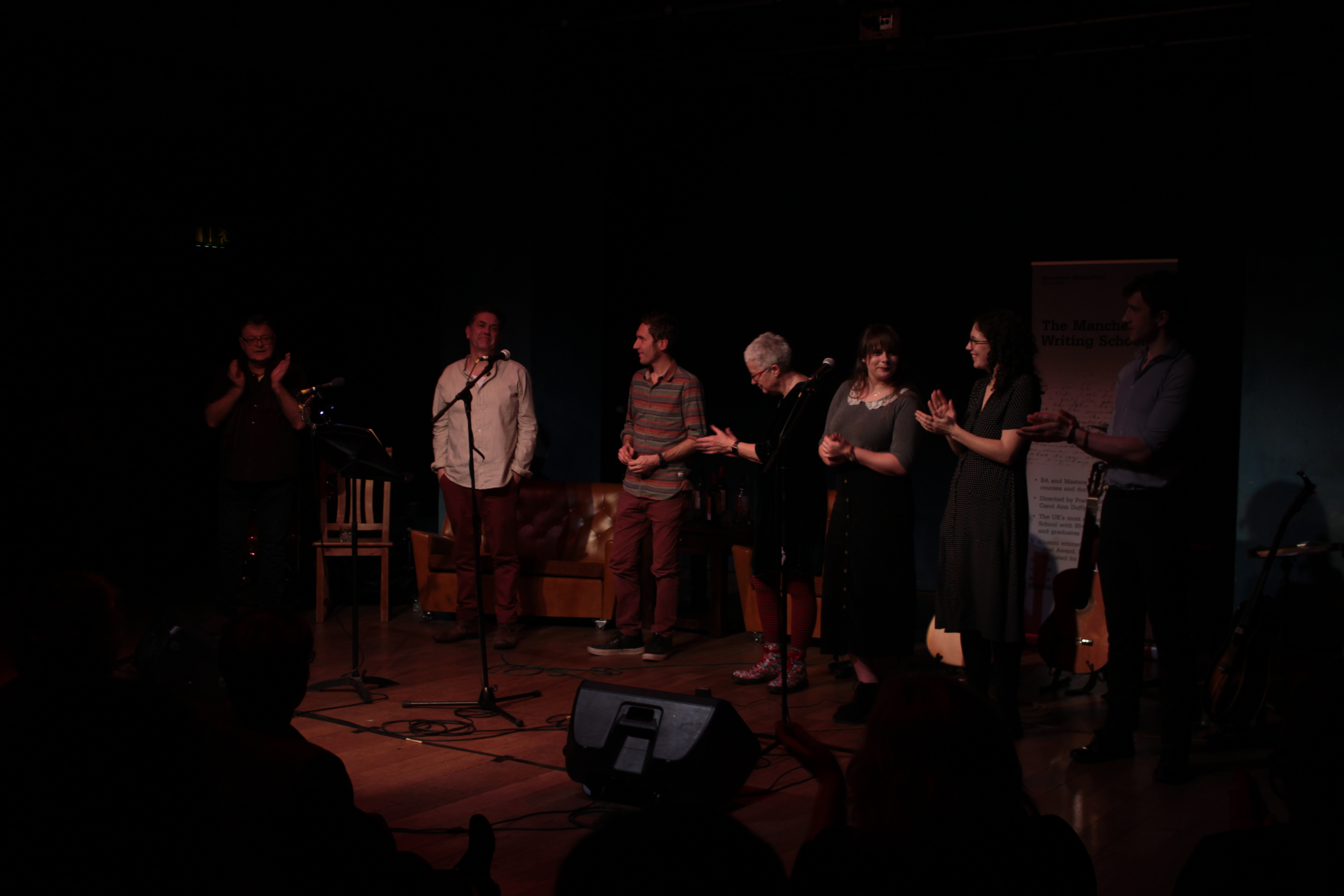 Opening her performance with a poem about her first ever memory, Mitchell immediately grasped the audience and refused to let go. “Sand under fingernails and the sky, bigger than anything you’ve had time to imagine.” She glided through the abstract of her piece in a soothing, slow-rocking rhythm. The style was reminiscent of a lullaby, inciting a caring focus and disregard for anything else in that moment.

Each subsequent poem Mitchell read mimicked some form of this rhythm, highlighting the distinct style she has adapted, to recall details of memories through a surreal and dreamlike lens. “Watch the breeze as trees quake downhill. Their roots, steel toe capped boots lean back from the clearing, away from us into the past.”

A roaring applause followed her final poem, clearly showing that the audience went with her to the places she revisited, and were pleased that they did.

“What I love about Daisy’s poetry is there’s an incredible music to it,” Pajak said. “It just sends shivers up my spine.”

Next to read was Lauren Garland, currently studying creative writing at the Manchester Writing School. Using a form of lyric poetry, Lauren examines the quiet intricacies of everyday life. Her work has appeared in publications such as Stand, Butcher’s Dog and Poetry Salzburg Review. Recently, she was also commended in the 2018 McLellan poetry prize.

Introducing her first poem, Garland described drawing her inspiration from a walk up a big hill in the Lake District, then immediately demonstrated the uniqueness of her style as she began reading ‘The Trig’. “The kind of comfort you only get from spending the night in a school friend’s bed.” An unusual use of word play to elicit emotions in her audience served to make the experience of listening unique to each individual present.

“Most of these poems exist in the spaces between two people,” she explained, poignantly putting into words the subtle feeling felt as you listen to the discourse between lines. “Aside from the fact that your hair fits your head exactly like auburn Lego, the thing I admire about you is how much you do in an hour.”

The tongue-in-cheek references to her inspirations added extra depth to Garland’s reading beyond the already powerful subtext as she effortlessly drifted between vast symbolisms throughout her poems.

As the applause simmered to a halt, Pajak took to the stage once again to introduce the final reader for the first half, Rachel Davies. Davies’ work has appeared in numerous publications, including The North, The Interpreter’s House, Obsessed with Pipework, Wigwelter, Atrium, Dragon’s Press and the anthology ‘Please Hear What I’m Not Saying’. Twelve of Davies’ poems are also featured in a shared pamphlet entitled Some Mothers Do, and she has won prizes through several poetry competitions, including Wells, Manchester Cathedral and Battered Moons. Davies is also coordinator of the poetry society ‘Stanza’ in East Manchester and Tameside, and is currently working towards her PhD, which she hopes to complete this year.

“The last time Rachel performed, somebody was applauding her afterwards so hard that they dislocated their shoulder,” Pajak informed a bemused audience who responded in hushed laughter as Davies took to the stage.

Davies introduced Some Mothers Do, stating that she would not only read her own work, but also the work of her collaborator Tonya Bevans, who sadly passed away before she could see her work in print, and to whom she had made a posthumous promise that whenever she read from the pamphlet, one of Tonya’s poems would also be read.

The first poem Davies read, Bevans’ ‘At Bamborough’ , depicted the deep memory of a distant experience, structured in such a way that the event seemed to be recent. The use of present tense instantly transported you there: “I bob up and down in shock, then run back blue fleshed, numb, gasping into the embrace of the towel.”

Perhaps the most distinct feature of Davies’ work was the playful enjoyment of her ‘Alternative Mothers’, in which she imagined numerous entities taking the role of her mother and pondered what that life might have been like. “Rona the rat-girl,” Davies read, ushering in the story of alternative mother number eighteen, “you recline on a bail of straw, draped in that mangy leopard skin in a distant approximation to sexy.”

The subtle delivery of Davies’ performance certainly heightened the impact of unexpected comedic moments, and each piece will undoubtedly remain etched in the mind of audience members long after the speaking finished.

“This is wonderful stuff that Rachel’s poetry does,” Pajak said, “it is a kind of wonderland and every poem takes you somewhere you don’t expect to go.”

The interval was bookended by that familiar ambient jazz. Once the audience returned, house poet John Fennelly read some of his own poetry. “The first one is about toxic masculinity, male suicide, the inability of some men to express their feelings… so happy new year everybody!” Fennelly calmly began, to a humorous chuckle from the audience.

“Sucked her thumb, sought my eyes. I hadn’t seen him wear a suit before, even on Sundays.” The abstract style of Fennelly’s ‘The Present’ served as an effective means of communicating these issues, as the discorded structure mimicked the content and themes all too well.

The final performance of the evening was by the duo of Paul Henry and Brian Briggs, introduced by Carol Ann Duffy, with particular emphasis on Henry’s newest publication, The Glass Aisle. From the instant Paul Henry opened his mouth to begin his first poem, ‘The Hesitant Song’, he commanded the full attention of everyone in the room with a soft and thoughtful voice.

With each subsequent poem Henry read, the intensity of Briggs’s musical interjections increased. At first a subtle backing track which heightened Henry’s words, the full power of their collaboration quickly became apparent. The pacing of words spoken steadily increased, with the passion behind them matching the tempo. Briggs’s vocal choruses perfectly punctuated each stanza of Henry’s reading.

This final performance reached stunning heights in the last performance of the night. ‘Kicking the Stone’, set in Aberystwyth in 1969, explored an imaginative yet grounded narrative which soared through the room with flawless call and response between musician and poet. It told the tale of a simple time in youth, with the unexpected magnitude of longing for that time emotionally executed in a crescendo of harmony. The final, softer vocals slowly shimmered away, leaving a stunned audience applauding and cheering, shaken in their seats.

As each performer returned to the stage one last time to take their bows, such positive energy encompassed the room that even the live jazz band’s reprisal of their sophisticated ambience couldn’t restore a sense of calm.