The windows form part of a wider campaign that present a series of festive “must-haves”.

The displays have sparked outrage, with one member of the public describing them as “vomit inducing”. The shocking difference between the two displays has provoked debate surrounding the apparent sexism and gender norms they represent.

Twitter user @CassandraKav tweeted: “But why is there a market for fancy little knickers for women & not men? The fact is that far too many men & women have been sold false ideas about women & sex. M&S may be a shop but they too have an ethical responsibility to address the inequality & imbalance between genders.” 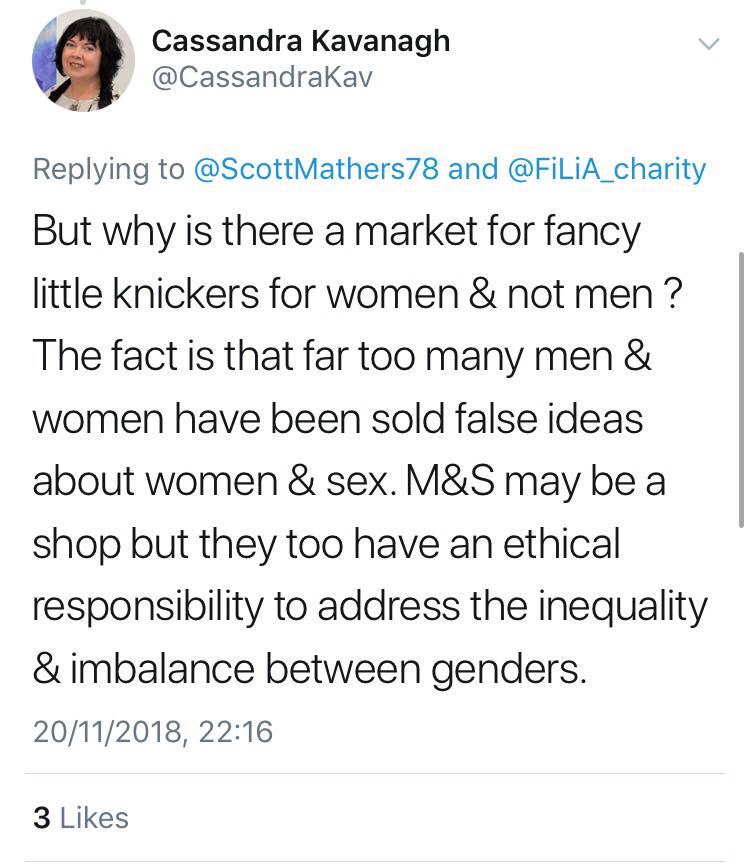 Sian ​Steans of Nottingham Feminist Action Network told HuffPost UK: “As a feminist and a mother to a young daughter I felt embarrassed that I had to yet again explain why women are depicted with so little respect.”

The charity FiLiA have also tweeted about the window display, saying: “On the one hand we are told that fancy little knickers are ‘must haves’. On the other hand, we are told that if we are wearing them… it may be held against us if we are raped. There are valid connections to be made when analysing our patriarchal culture.”

This debate comes just days after a rape trial in Cork, Ireland used a 17-year old girl’s underwear in defence of her alleged attacker. The lawyer of the defendant said that the thong the teenager was wearing suggested that she was ‘open to meeting someone and being with someone’.  This has sparked protests, online and on the streets, and MP Ruth Coppinger held up a thong in the Houses of Parliament.

Twitter user @jadeconcannon tweeted: “Yes, the M&S window display is sexist, and yes there are way more important issues, just like how a GIRL’S underwear was used as a reason as to why she was raped. So it’s okay to sexualise women’s bodies for consumerism but will ultimately blame them for wearing “little knickers.”” 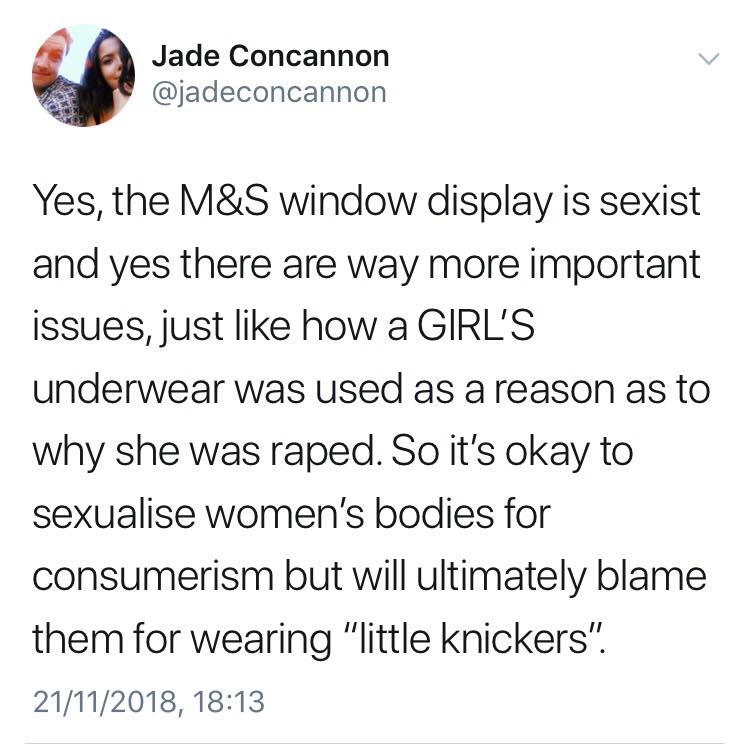 A spokesperson from M&S confirmed in a statement that they will not be altering their ad campaign as a result of the uproar, adding: ”M&S sells more underwear, in more shapes, sizes and styles, than any other retailer, especially at Christmas.”