You are here: Home / Manchester / Opinion / “Manchester City Council has a long way to go in helping our homeless” – Shawna Healey

Anyone living or visiting Manchester knows that the city has a serious homelessness issue. There is almost double the number of rough sleepers than an official count suggested back in the 2017. GP referrals of long-term homeless are at 500 individuals, much higher than the 278 recorded.

It’s an issue without a clear solution, and one that strikes an emotional response in many. So when the Manchester City Council published a thread of tweets offering advice on how to help homeless people, they were heavily criticised.

In the series of posts, the City Council advised that directly giving money to people on the streets is “harmful to people’s longer-term health”, and said that although “it often feels like the right thing to do”, it can be detrimental and in fact “stop people from getting the help they really need”.

This controversial advice was met with criticism online, with many people commenting on the tweet to share their disagreement. One Twitter user commented: “Hang on are we talking about actual homeless human beings here or a flock of ducks at the local park?”

The City Council also the goes onto say that when people give money directly to people on the street, it makes it harder for the person to get help that they need. They add that there are “plenty of services” offering food and support, and giving food stops people from accessing these services and that it’s ultimately bad for their health.

The council also tweeted that “unofficial soup kitchens are also a bad idea”, adding that they “attract unscrupulous people, who prey on our most vulnerable people, often dealing drugs or exploiting them”. 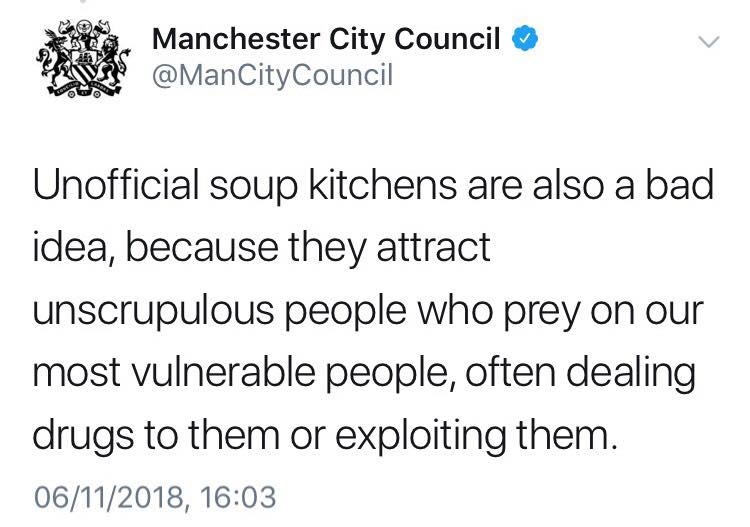 People on Twitter were upset and outraged at the tweets, with some accounts commenting that there was an “underlying #narrative”, in play by condemning soup kitchens. Users highlighted that many of the so called “unofficial soup kitchens” took part in a protest last weekend to raise awareness of the deaths of four homeless people on Manchester’s streets, and this was likely the reason for their critical mention.

A couple of days before Halloween, on 27th October, a group of 50 people brought traffic to a standstill when they marched through the city centre chanting “no more deaths on our streets”.

Three weeks earlier, two men known to local homeless charities but believed to still be homeless, died within 24 hours of each other. The cause of both deaths remain unknown and unreported.

Mark Evans, from the Ardwick-based charity Supporting People In Need, told the Manchester Evening News that the protests were “all about the deaths on the streets over the last few weeks in Manchester. But also the unrecorded deaths.”

He added, “We just think people need to be aware of what’s going on in this city. We hear all these pledges about what’s being done for the homeless but we need to see action now – people are dying. It’s not good enough.”

Mayor of Greater Manchester Andy Burnham, has recently rolled out an ambitious initiative to provide every rough sleeper with a bed this Autumn and Winter. Burnham’s initiative, titled A Bed Every Night, claims to have helped over 130 people have somewhere to sleep overnight since it launched.

This figure does not even cover a quarter or the rough sleepers that Manchester’s streets is home to. So where are the beds for others? Anyone who walks up and down Oxford Road or through Piccadilly Gardens will see that the number of rough sleepers on our streets hasn’t decreased

The reasons why Manchester City Council chose to tweet this “guide” when they did, and reference “unofficial soup kitchens” in this way, remains unknown. Twitter offers conspiracy theories that have sinister undertones, but if the Council are genuinely acting in the best interests of homeless people in Manchester, there’s still a long way to go.