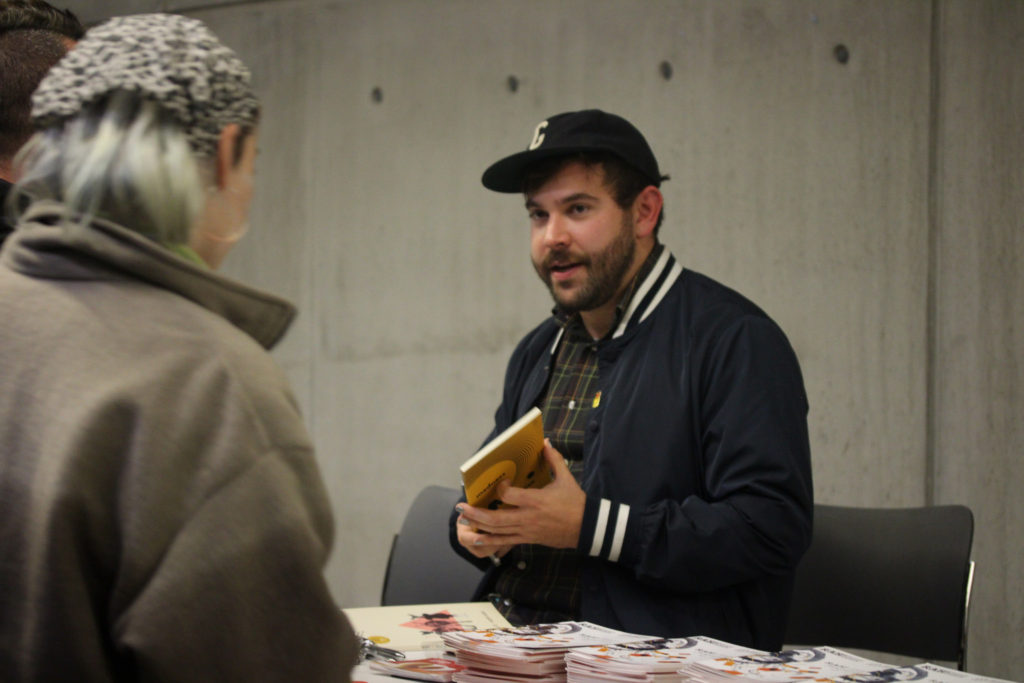 Poet Andrew McMillan joined Manchester Metropolitan writers and multi award-winning poet sam sax at the Business School for a celebration of literature, the body and queerness.

sam sax is a queer Jewish writer and educator from New York. He’s the two-time Bay Area Grand Slam Champion and winner of the Gulf Coast Prize, the Iowa Review Award, and the American Literary Award. His first book, Madness (Penguin 2017) received the National Poetry Series award and Bury It (Wesleyan University Press, 2018) was won the James Laughlin in America. 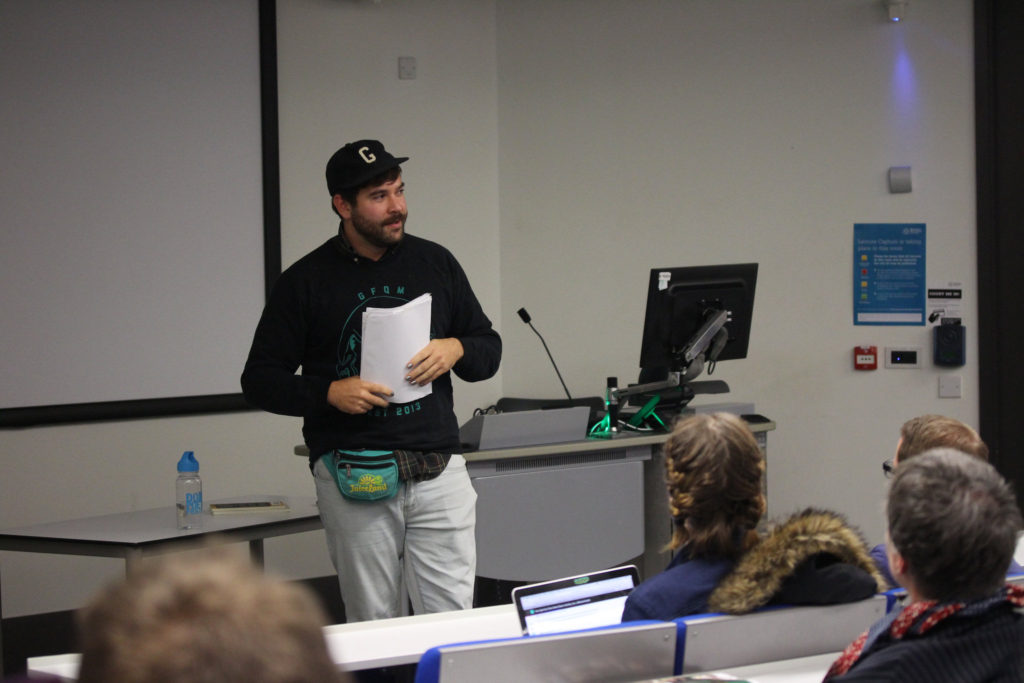 aAh! spoke to sax before the event, who said: “I’m going to be reading a smattering of old and new work, things that are in this book and the last, and poems that aren’t published anywhere.

“The old ones have stood the test of time; the new ones have a different excitement and energy to them. It’s nice to fall back on stuff that you know does a certain thing and also to experiment with new work.”

sax’s work has been featured in The New York Times, Nation and Poetry Magazine, and he has also had poetry and interviews published on more accessible platforms such as BuzzFeed and HuffPost. sax spoke to aAh! about the value of this accessibility in poetry, saying: “It seems like a lot of poets are putting work in less poetry-specific venues and spaces. I think its to do with a different kind of attention being paid to writers and poems, where people recognise that it’s not a niche literary identity but something that informs their daily life and practice and that they carry with them.

“More people reading poetry is a good thing, and I think whether or not you like the work it functions as a gateway drug to other writers that you may respect more or less, so my two cents is pro anything that brings people to a poem.”

The event opened with three readings from previous Manchester Writing School students, a showcase of fresh and stirring writing, beginning with Ian Walker. 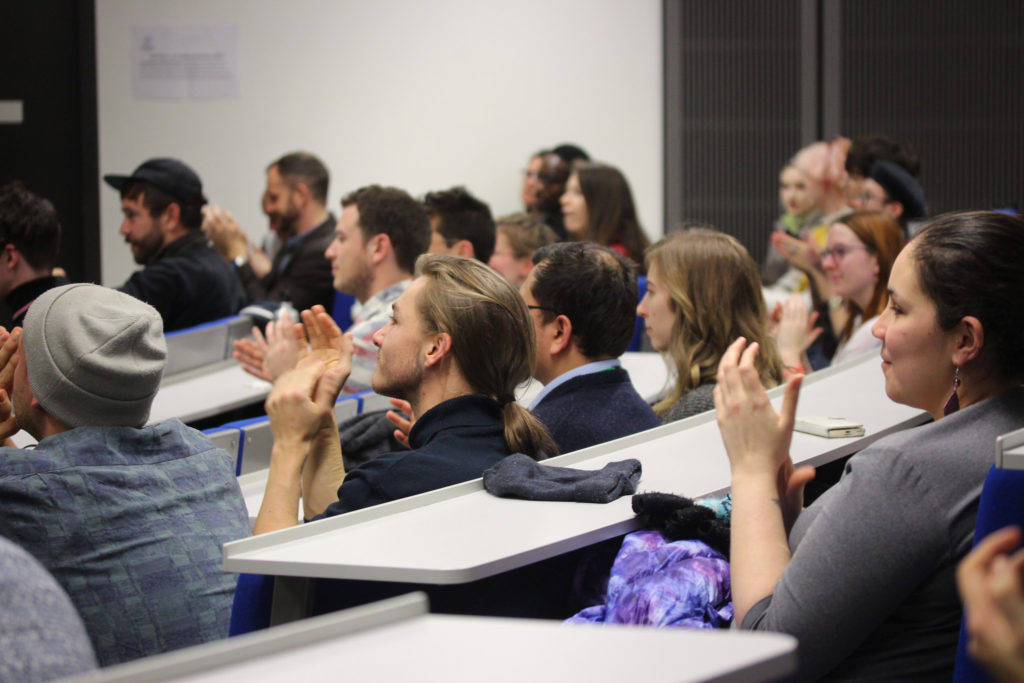 McMillan introduced Walker to the stage, saying: “Ian Walker’s work touches on the body and the spiritual, often through insects and bugs. His work shows us that in understanding the curiosities and mechanics of other species, we might have some way to a better understanding of our own.” 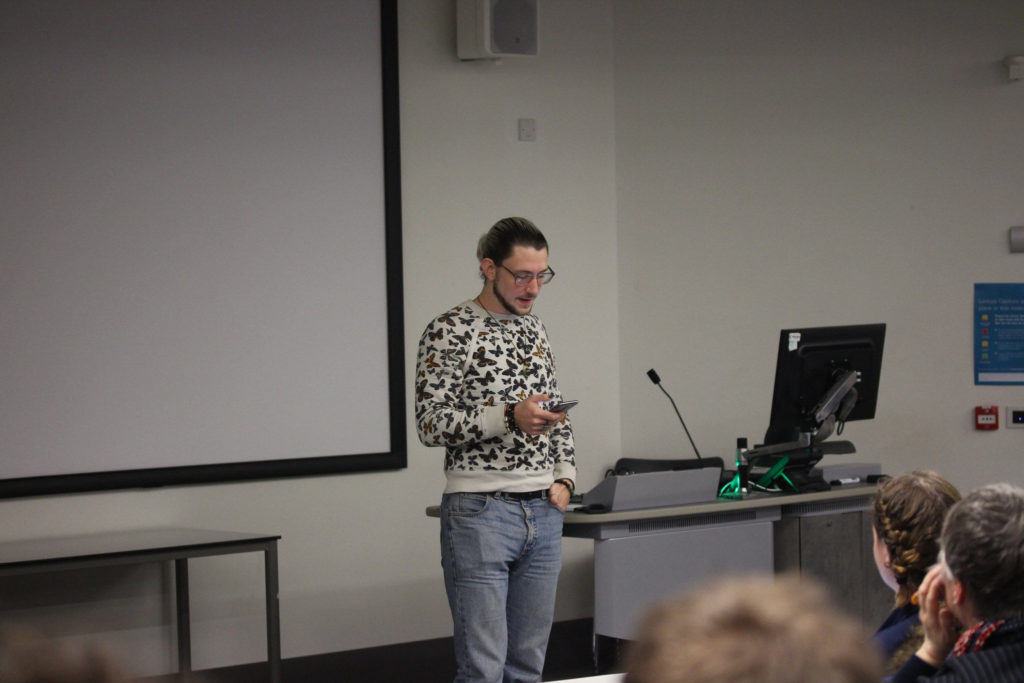 Next to read was Callan Waldron-Hall, a recent graduate from the Writing School, with McMillan introducing: “his work interrogates innocence and the male body through ciphers of video games and assumed identities.”

Waldron-Hall’s words crawled through the dark tunnels of consciousness, ‘But This Was Never About The Swimmers’ grasping the body to explore the fragility of being human, while another beautifully intertwined Frank O’Hara’s ‘Lana Turner Has Collapsed!’ with the poet’s time working in a call centre and TV personality Gemma Collins: “Oh Gemma Collins, I’m sorry. Get up!” 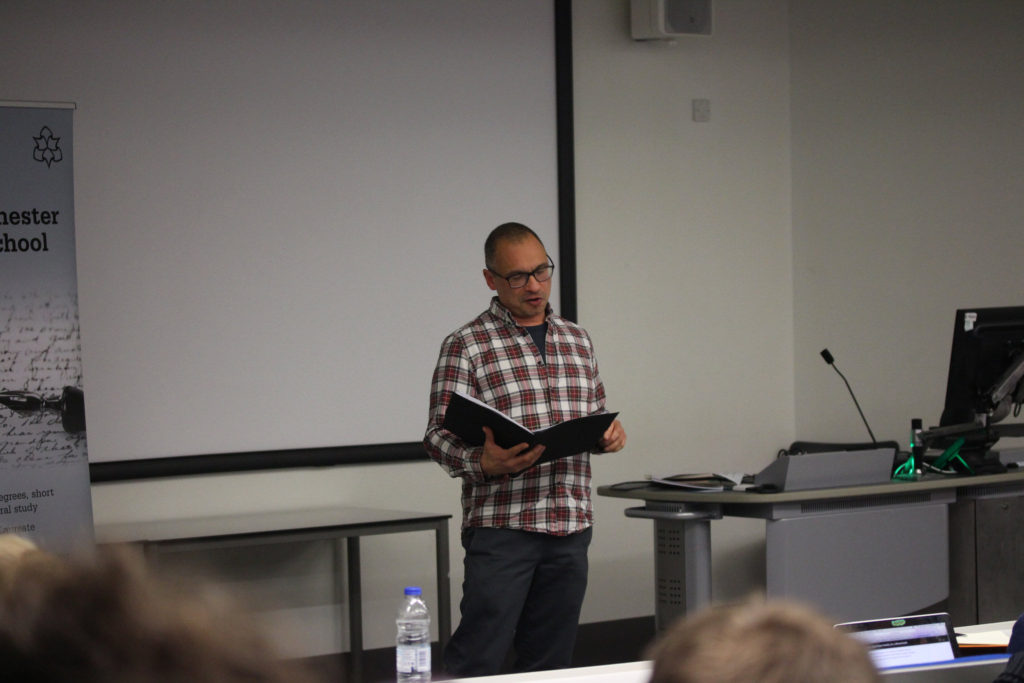 Waldron-Hall continued with ‘She Tells You the Problem with Double Glazing’, a poem about a friend who, struggling with mental health, was told to think of her problems as a ‘problem pie’: “She sees you less and less, something about condensation, something about ensuring the steam escapes.”

The final introductory reader was Ian Humphreys, whose debut collection, Zebra, is scheduled for release, next year, with McMillan saying: “Ian Humphreys’ acutely observed and joyful poems explore mixed identities, otherness and coming of age as a gay man in 1980s Manchester.”

“I grew up in a small town in Cheshire in the 1970s and 80s,” began Humphreys, as he gave context to his poem ‘Another Boy’s Story’, “mixed race, gay and a little bit confused, and I was constantly searching for identity touchdowns that weren’t there. Eventually I found hope in black and LGBT literature coming out of the States at the time.” 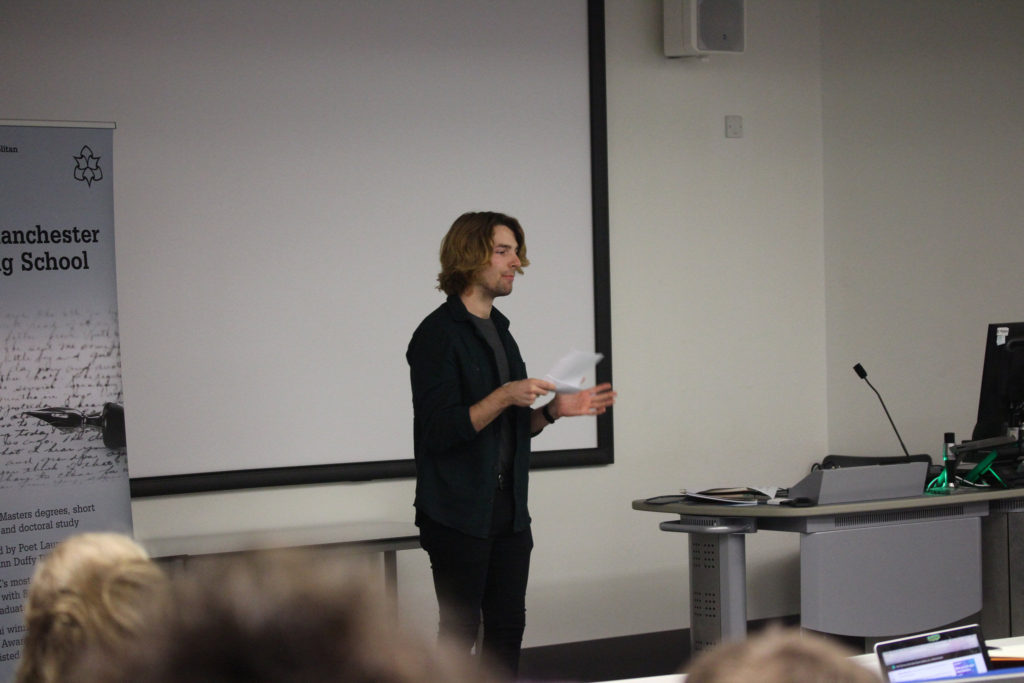 The poem, paying homage to writers such as James Baldwin and Edmund White, took the perspective of a child lost in medical books that condemned homosexuality, who then found solace in the literature of great non-white and LGBT writers.

Humphreys’ poems intertwined powerful, historic heroes with a grippingly authentic perspective, such as in ‘Look How Far We’ve Come, Toto’, a paean to gay liberation activist and drag queen, Marsha p Johnson, a prominent figure in the Stonewall riots of 1969.

With that, McMillan approached the stage to introduce sam sax with a stunning sentiment, saying: “I first came across sam’s work the morning after the Pulse nightclub massacre in America. I was staying in America at the time and woke up in my hotel room, rolled over in my bed, away from the news, and to the latest copy of Poetry Magazine that had just come out that month.

“I wanted there to try and find some comfort and solace away from what was happening in the world and the first poems that I turned to in that issue were sam’s, and how else, it seemed to me at that time, to respond to terror but to speak openly and freely about the life that you’re living.

“I’ve continued to keep returning to sam’s work, which is full of the body, full of life, and most importantly, to me, it seems that it is full of truth.”

“I love how faggy this is already,” sax said, flicking through a bundle of paper. “It’s cold out, I wouldn’t have left my home, so I’m grateful you’re all here.”

sax’s poetry offers a scrutiny of language and its origin, and ‘Lisp’, sax’s opening poem, delved into the heritage of the S sound he was born to lisp and eventually trained out of. In this poem, sax’s lisp is a suitcase to carry the history of his ancestors, as well as his sexuality: ‘when i say please / let me suck your cock / i sound straight / as the still secondhand / on a dead watch.’

Many of sax’s poems put an intimate pulse into the socio-political, such as ‘Surveillance’, written after the suicide of Tyler Clementi in 2010. ‘The Tree of Life’, written after the synagogue where eleven Jewish people were killed in Pittsburgh, on October 27th, also tackles the impossibility of articulation in the face of trauma: “Elders becomes a plum tree, young and flowering again.”

sax’s poems were slightly different in performance to those published in his books, with a line taken out or switched around here and there. In this, the poems became an evolving thing, something that was ‘happening’ in front of us, as if the audience were taking part in their evolution.

This was not the only interactive element to sax’s reading – often, he would ask us to bash our palms on the table or ‘whoop’ to identify the end of a fragment or poem. This was most powerful in ‘Kaddish’, a sequence written like a working through of the death of his boyfriend, the first person sax had ever loved.

After the reading, we spoke to some of the poets about the significance being a part of the event held for them. Ian Walker said: “There’s a bunch of poets, including Danez Smith and sam sax, who have been inspirational in my writing and personal life over the last two years. I was fangirling over sam reading in Manchester, so to be asked to support with Ian and Cal was dreamy. Such a queer platform. Grateful to the Writing School.”

Callan Waldron-Hall also said: “I think the collective energy of performers and audience is what really made the night special. It felt closer to a conversation, and I’m really thankful I got to be a part of that. The dialogue between poems was incredible too – I think each poet addressed something similar on the night, yet all went about it in such a different way. That we could all offer a different way in, a different point of view, really stood out.”