Angela Renée White, otherwise known as Blac Chyna, has been criticised after announcing she is launching a skin-lightening cream with beauty brand Whitenicious, and will be travelling to Nigeria to endorse the expensive new product.

The reality TV star, social media influencer and owner of 88 Fin, is working in partnership with the brand Whitenicious, founded in 2014, to launch Whitenicous x Black Chyna Diamond and Illuminating Cream.

Chyna invited her fans via Instagram to “discover” the product in an event held by her and the brand in Lagos, Nigeria. The cream, with a Swarovski-covered jar, is valued at $250, or £195.

According to the website, the cream “gives a brightening glow for younger-looking skin” and “brightens and lightens without bleaching skin out”.

A spokesperson for Chyna told TMZ that Chyna has been using the brand “for a few years” to help with her hyperpigmentation.

Dencia, Cameroonian pop star and owner of Whitenicious, said to Ebony magazine: “Will Whitenicious bleach your skin if you use it on all your skin? Yes, it will. Are we selling Whitenicous for that purpose? No, we’re not.”

According to a World Health Organization (WHO) report, 77% of women in Nigeria use skin-lightening products on a regular basis, which explains why Chyna is travelling internationally to sell the product.

The WHO also reported that chemicals in the skin-lightening products, such as mercury, are linked to liver damage, reduced resistance to bacterial and fungal infections, anxiety, depression and psychosis.

Products that contain mercury are banned in the EU and Korea, but in countries including Nigeria, Togo and Sengal, they are sold without restriction.

One Twitter user, @degostTee, wrote: “Blac Chyna is launching a skin bleaching cream is just Blac Chyna doing Blac Chyna things… the real issue here is that it’s being targeted to the Nigerian market and the fact that the villainous product will most likely sell out in Nigeria”. 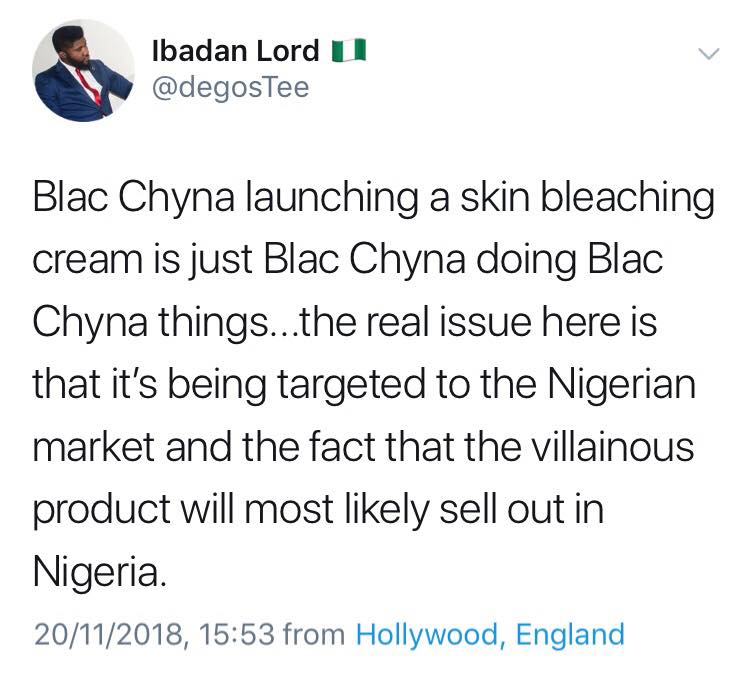 Another twitter user added: “Blac Chyna partnering up with Africa’s bleaching king and queen to create a new face bleaching cream is beyond problematic. It’s really rubbing me the wrong way, ain’t [sic] no way in hell that she would do that in LA. Exploiting Nigeria’s colourism product is disgusting.” 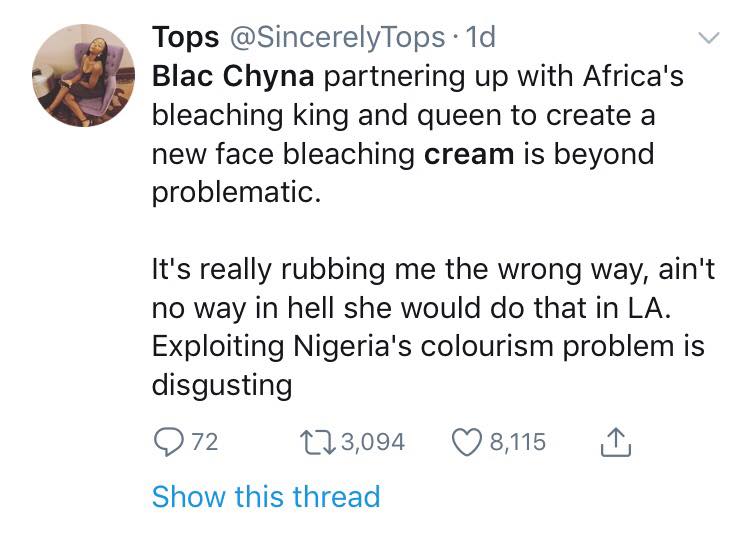 Blac Chyna has responded to criticism on Instagram stories saying that she is a single mother providing for her kids. She wrote, “So my children aren’t supposed to live the same lifestyle as their fathers etc etc haha? As a single mother, I provide for them and give them the luxury lifestyle that they deserve… WOW!!”

Chyna’s brand isn’t the first to be drawn into criticism over selling skin-lightening creams. Last year, Nivea advertised a product featuring a black woman using one of the company’s products with the tagline “visibly lightens”. This advert was heavily criticised, with social media users branding the product and the company “racist”.

What do you think? Join the conversation over on Twitter @aAh_mag