You are here: Home / Culture / Music / News / Johnny Marr: “Not everybody that follows me thinks The Smiths is the best thing I’ve done.” 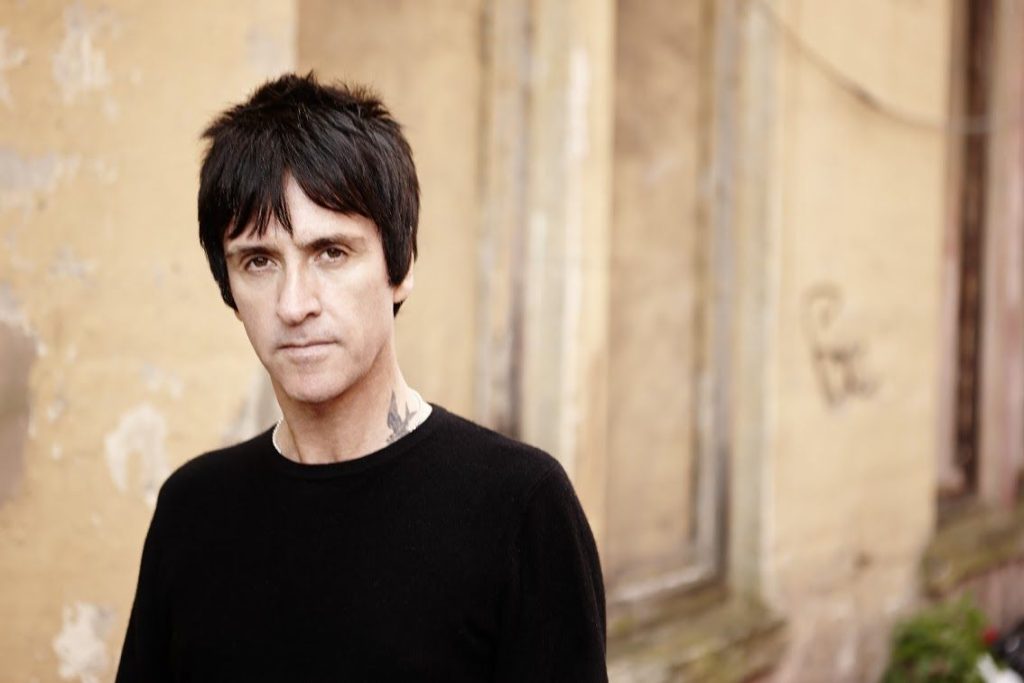 Johnny Marr has had an incomparable career. In 1982, he founded The Smiths, a band that would go on to change the alternative rock genre indefinitely. He has since enjoyed a successful career recording and performing with a selection of artists, including Electronic – a collaboration between Marr and New Order’s Bernard Summer – and American rock band Modest Mouse, as well as The Cribs. We talk to him as he shares all in his autobiography Set The Boy Free.

To date, Marr has contributed to sixteen studio albums, including two solo albums, and has appeared as a guest musician on numerous projects. We meet in Manchester’s Night & Day Café, a favourite venue of Johnny’s. “I’ve got really close ties with this place,” he explains. “Compared to other bars, this place is really easy to be around.”

Last year, Marr released his long-anticipated autobiography, Set The Boy Free, a collection of poignant childhood experiences, career highs and lows, and insights into his songwriting. He explains how the memoir came about: “I liked the idea of writing a book and something told me that if I didn’t do it soon, I would never get around to it. I didn’t want to write a novel, so I thought the autobiography would be a good place to start.”

The guitarist joined his friend and composer Hans Zimmer on a select number of dates for his recent European tour, but admits he still found time to schedule writing sessions.

“Sometimes I’d be in a hotel room for ten hours, just writing. I don’t want it to sound like it was a chore because there was so much joy in a lot of it and a sense of achievement. I enjoyed the process; it was great.”

What was his vision for Set The Boy Free? “I didn’t want it to be a ‘boys with guitars’ thing. I made a definite decision that I was going to write about some of the songwriting processes because I felt that people would like the story of how ‘There is a Light’ was written and how ‘How Soon is Now’ was recorded. I think people who are interested in me, and particularly in The Smiths, are going to want to know how it felt when we recorded ‘Hand In Glove’ or ‘This Charming Man’.”

Marr recounts the moment he knocked on Steven Morrissey’s front door – Morrissey a then 23-year-old writer in an oversized cardigan – and asked him to front his new band. They bonded, instantly, and he explains why he and Morrissey worked so well as songwriting partners: “It’s not just upbeat music with sad lyrics. Sometimes it’s completely the opposite and that tells you even more about mine and Morrissey’s relationship.

Despite the split and everything that followed, Marr’s memoir includes some wonderful perceptions of his and Morrissey’s friendship. One standout moment involves the pair leaning into one another over a tape recorder, with Marr hunched over his guitar.

“I was trying to not let it fall between my knees,” he laughs, demonstrating the arched pose. “The two of us in this little space, knowing that we were creating something really special.”

Marr says the last time he and Morrissey saw one another was in 2008. Is the partnership really over?

“We’ve emailed each other since then, back and forth, but we don’t really need to talk that much.”

Set The Boy Free isn’t just for fans of The Smiths. Shortly after their demise, Marr joined The The – an alternative rock band fronted by Matt Johnson.

“Not everybody that follows me thinks The Smiths is the best thing I’ve done. There are loads of people who love The The and don’t really like The Smiths very much. ‘Slow Emotion Replay’ is a contender for one of my favourite things I’ve ever done. I’m not taking anything away from The Smiths, but it’s partly because of the lyrics.”

Johnny concentrates and reminisces: “’The more I see/The less I know/About all the things I thought were wrong or right/Or carved in stone/So don’t ask me about War, Religion, or God/Love, Sex, or Death/ Because everybody knows what’s going wrong with the world/But I don’t even know what’s going on in myself.’ That’s as good as anything I’ve ever played with.”

Johnny and his family moved to Portland, Oregon in 2006 to join American rock band Modest Mouse, a time in his life of which he is particularly proud.

“I didn’t expect that I would spend a significant amount of my career in an American band. Isaac Brock is an incredible lyricist and I was really fascinated by what he was writing. Even if it was weird lines like, ‘Tiny Giants made of Tinier Giants’. I’d be listening thinking, ‘Did he really just sing that?’ It was the best time of my life and it was very successful. I think that has surprised a few people because I’m so identified with The Smiths.”

Marr describes how it felt when he knew it was working: “I remember sitting in a studio in Mississippi and I had a moment of clarity, where I looked around and took a picture of that situation. I’ve been around long enough to know that it was a special combination of people. The chemistry was amazing. It’s all part of my career now and I wouldn’t swap those moments for the world.”

As much as he enjoyed life on the West coast of America, the musician says there is something about being a creative in Manchester that he can’t give up. Now, Johnny is a patron of the Manchester Modernist Society, a group dedicated to celebrating post-war architecture and design in the North West of England.

“They get together and put on talks, and go on historical walks around the city. The talks will be on the lines of: Town Planning in the early 70s and how that relates to brutalism.

He explains a term that he came across during a conversation, which perfectly describes his affinity for architecture and place: “I’m interested in psycho-geography. It’s to do with information that you take in from your environment and the atmosphere of your surroundings. Manchester’s a fascinating place and I started to bring a lot of that interest into my songs.

“With my song ‘Dynamo’, I wanted to write a love song but I didn’t know how to get around doing the obvious. So, I ended up thinking, why don’t I just write a song about a building? Because I can say things about certain buildings that I wouldn’t normally say about a person.”

Does he think that there is such a thing as a Manchester sound? “I think it’s a valid question, not just because of the amount of music that comes out of here. There’s a sound in Buzzcocks from the late ‘70s and Oasis, twenty-five years later, and all points in between. Even though the bands may be completely different, it has a Northern quality to it. You can’t underestimate the significance of the industrial revolution on anything creative and cultural in Manchester.”

He elaborates on personal experience: “Growing up as a creative person, you need to get out of the rain and put some colour into your life. If you’re growing up in a grey and wet place, it’s pretty good to make rock music, and that’s why Joy Division come from Manchester and not Australia.”

Growing up as a first-generation Mancunian with Irish parents, Marr says his family’s attitude towards music was more of a way of life than entertainment.

“People would literally push the furniture back just to play instruments and dance. I noticed that when my friends’ parents listened to records it would be at Christmas or on a weekend at best, whereas my family, they’d be rocking on a Monday night.”

With Set The Boy Free, Marr wanted to avoid addressing ‘Rock Star Neurosis’ and insists that he lives with a positive outlook. However, like anybody, he has his moments: “Anguish and doubt, and feeling fucked up like anybody else. Sharing insecurities, doubts and human frailties is absolutely fantastic. I think that if you’re a creative person and you don’t work, you’d go mad. There’s something going off in my mind that says, ‘If you don’t make a record or go on tour, then you’re probably going to end up in the nuthouse’.”

He adds, quickly: “Not everyone’s creative though and that’s OK. The last thing you need when there’s a power cut is a poet.”

In 2010, Johnny worked with Hans Zimmer on the score for the film Inception and again in 2014 for The Amazing Spiderman 2, as part of supergroup ‘The Magnificent Six’, with Pharrell Williams and producer Junkie XL.

“I prefer working on films that aren’t big blockbusters. Inception was the exception because it was just such a great film. I wasn’t too crazy about working on Spiderman. It was a great experience but I wouldn’t want to do that too many times. It felt a little bit like a job. As much as I enjoy professionalism, I never want what I do to feel like ‘just a job’.”

Why was working on the Inception score so special? “Guitars weren’t used in movies for years and when they were it was this kind of 80s, guitar shop stuff. And then after Inception, suddenly there were all these twelve string guitars popping up all over the place. I can’t take any credit, other than I played it. It was his vision to bring a guitar into the Inception soundtrack. If you’re working with people like Hans Zimmer, you haven’t got too much to complain about.”

A dedicated family man, Marr pauses the interview to point out his guitarist son Nile, rehearsing in the back with his band, Man Made. I ask if it is exciting to see his son choose a similar career.

“I’m just glad he’s got a job and that he’s good at it. My kids grew up around creative people and they’re artistic. My daughter Sonny works in publishing. The main thing is that they’ve got a work ethic.”

The Smiths disbanded when Marr was just twenty-three years old. How does he feel when he is defined by something he did at such a young age? “I wouldn’t say I’m frustrated because I understand it. There’s a big part of me that just always says, ‘You’re really lucky to be known for anything.’ I know that The Smiths were so loved and were such a magical thing for people. I genuinely like a lot of the other stuff that I’ve done. The bottom line is, I’m a working musician and that’s what defines me. I never get too far away from that.”

Marr exudes great enthusiasm for the younger generation: “The future is always in the hands of the young ones. They’re the saviours. I think it’s important for anyone doing anything creative, not just to support things, but also to have a tie with the student community and what’s going on with the university; the groundswell of modern thinking.”

With his charisma, passion and unmistakable talent, Humanity Hallows is sure that Johnny Marr will be a huge presence in the music industry for years to come.

Set The Boy Free is available to buy now.