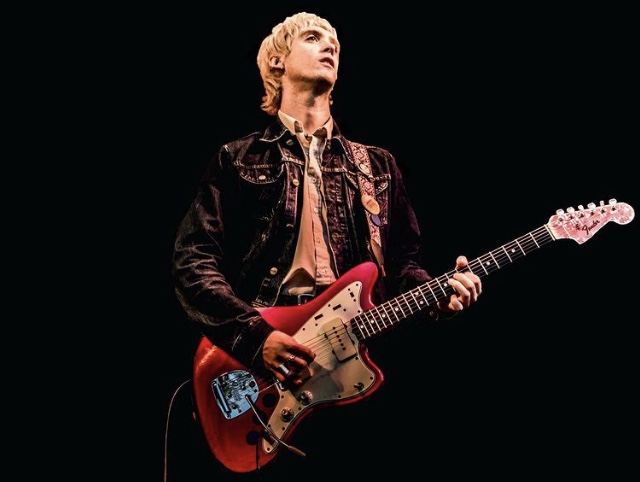 We can probably all agree that 2020 hasn’t been the most forgiving year that we’ve faced. However, what has been undeniably impressive is how artists and those involved in the creative sectors have definitely risen to the challenge. Whether they’ve taken part in live streams, interviews over Zoom, or released music they’ve created and produced from home – it’s a true testament to their talent and perseverance.

Keeping this in mind, we thought we’d share our picks of the week from some of the best emerging artists, who certainly haven’t disappointed us with what they’ve released this year. Including tracks by Glaswegian post-punk The Ninth Wave, as well as indie-rock favourite Nile Marr, there’s something for everyone.

Known for her powerful vocals in Hands Off Gretel, frontwoman Lauren Tate has donned a new alter-ego in the form of Delilah Bon. Describing her music like, “Cardi B fronting Slipknot”, each of her tracks is explosive and gloriously outspoken. Bon describes her latest track as about, “realising my dreams, and all those who bullied and ridiculed me wanting to come back into my life.” Refusing to stick to a single genre, she expertly combines brat-punk with rap and hip hop. Her screaming vocals demand to be heard, especially the words, ‘All those years sitting on my own at school / And they want to sit with me, now I’m cool’. Powered by thumping beats and high-energy guitars, ‘School’ is both relatable and expertly crafted. Representing strength and fighting for what you believe in, Bon is the inspiring figure we all need.

You can stream ‘School’ on all major streaming services, and look out for her forthcoming debut album, due to be released in Spring 2021.

Keep up with Delilah Bon:

‘Freezer Jesus’ by The Red Stains

Acting as a strong follow-up to their debut track, ‘Mannequin’, each of their releases only further highlights the cracks in the façade presented by society – as only all good punk bands can, The Clash or Sex Pistols, anyone? Biting lyrics, echoing vocals, and a driving beat, The Red Stains’ latest release ‘Freezer Jesus’ is wonderfully perceptive. Referencing both the Trafford Centre and Arndale in the track, as well as their rather iconic line, “‘Cause I’ve seen Jesus buying chicken nuggets out an Iceland freezer” – their tongue-in-cheek lyrics witness how consumerism is still being sold as the key to happiness. For the naysayers who try to argue that punk is dead, Manchester-based band The Red Stains, are determined to prove that it’s still very much alive and kicking.

You can stream, ‘Freezer Jesus’, on all major streaming services.

Keep up with The Red Stains:

‘Everything Will Be Fine’ by The Ninth Wave

Everyone’s favourite emerging post-punk band is back, following up their successful ‘Happy Days!’ EP, with their newest track, ‘Everything Will Be Fine’. The band’s vocalist Haydn Park-Patterson has commented that it’s about, “twisted optimism, self-reassurance, and hope”, and is “the happiest sounding song we’ve recorded.” He’s not wrong as the lyrics are typically more uplifting than their previous releases. Although, the band doesn’t stray too far from their dramatic and gothic beginnings, while also using a beautifully large dose of synth and soaring vocals. It’s also set to feature on their sophomore album, which is expected to be released next year.

You can stream, ‘Everything Will Be Fine’, on all major streaming services.

Keep up with The Ninth Wave:

Despite sharing the surname of one of history’s most famous musicians, (The Smiths guitarist, Johnny Marr) indie-pop artist Nile Marr, with his penchant for creating a hit, is keen on making music to his own beat. Combining soft strumming with glittering melodies, his ballad ‘Teenage Kissers’, is a remarkable update on noughties Britpop. Best described as chicken soup for the soul, it features Marr’s characteristically soothing vocals and thoughtfully penned lyrics. Guiding you through an alternative tale of love, he sings, “You’d fall in love but you say it’s just chemicals, Singing a love song where everything goes wrong.” It also appears on his recently released debut album, Are You Happy Now?, written underneath a Manchester night club. Vulnerable and heart-warming, it’s yet another stellar track from Marr.

You can stream ‘Teenage Kissers’ from his debut album, Are You Happy Now?, on all major streaming services.

Keep up with Nile Marr:

Immediately drawing you in with its smooth groove and shimmering guitar melody, it’s wonderfully easy on the ears. Released by multi-instrumentalist and producer Match Sienkiewicz, ‘Pink Hotel’, is both retro yet modern, which can easily be put down to Sienkiewicz’s inspirations for the track. After revisiting many soul and disco records and hunting for them in vinyl shops in London, he’s successfully captured the nuances of the genres in his track. Perhaps best noted by the artist himself, “the music is timeless and even though it’s not as popular now, you’ll always hear a disco tune get everyone dancing at a house party!” It’s clear to see that every aspect was precisely put together with the final result in mind, and if you’re looking for the perfect mix of disco and indie, this is the track for you – see you under the disco ball.

You can stream ‘Pink Hotel’ on all major streaming services.

Keep up with Match Sienkiewicz:

‘She’s My Religion’ by Pale Waves

A beautifully raw and undeniably honest track, Pale Waves have once again defended their title as indie-pop perfectionists, with their latest offering, ‘She’s My Religion’. It’s an ode to love, but not just the usual picture-perfect type of love that is so often flaunted in music. The love which Heather Baron-Gracie sings about is far more powerful, as the track is a celebration of a same-sex relationship without overdone cliches, as well as both sides of the coin – the good and the bad of a relationship. Starting with a soft guitar melody and consistent drums, it builds up to a powerfully moving chorus. Baron-Gracie’s vocals are as ethereal as ever, as she sings, “She helped me find a different kind of love, made me feel like I was finally enough”, and “She’s no angel but she’s my religion”. It’s empowering in its nature and heart-warmingly romantic. Self-described as the type of a track that Baron-Gracie wished had been available while she was young, it can only build their fans’ excitement for their forthcoming sophomore album, Who Am I?.

You can stream ‘She’s My Religion’ on all major streaming services and look out for their forthcoming second album, arriving 12 February 2021.