You are here: Home / Opinion / Opinion: Life, Liberty and Superiority Complex – The Decline and Fall of Matt Hancock 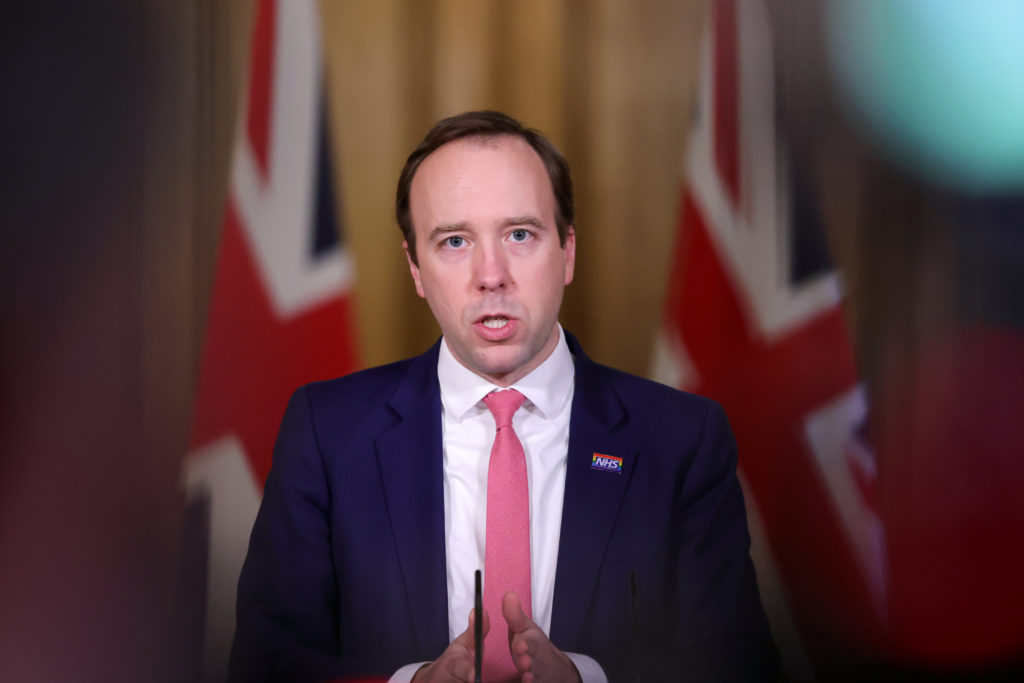 By now, we should have been free. Since 22nd February, we’ve been told by the Government that if we behave ourselves and follow the rules for the final stretch then we would be granted our civil liberties again. Yet one week before the long promised date arrived, the Prime Minister withholds freedom once again. We shouldn’t be surprised at the Government’s decision to delay the lifting of lockdown. Back in March 2020 when the first lockdown was announced, we were told it would take three weeks to flatten the curve. The curve has been flattened a few times in the 466 days since Boris Johnson’s televised address telling us that we must stay at home but, as is usually the case when the State takes control, it is reluctant to relinquish power.

Freedom is our inalienable natural right.  It is the basis on which the majority of nations are founded on.  In political philosophy, freedom is defined in positive or negative terms. Negative freedom consists of being free from something whereas positive freedom consists of having the freedom to do something. We should always be free from the State controlling almost every aspect of our lives. Instead, in the name of public health, we have allowed the State to dictate what we are free to do for all 15 months of this pandemic. It is understandable that at the very start of the pandemic, the Government decided to lockdown because the Coronavirus was such an unknown. But it has gone on far too long and this is why we are in the situation we are in today.

The State can only ever act based on the consent of the majority and the Government has certainly made the most of the people’s consent. Boris Johnson’s tremendous parliamentary majority has allowed him to essentially do whatever he wanted and the Conservative Party’s big wins at the 2021 Local Elections demonstrated clear public support for the Government’s handling of the pandemic. But this delay to Freedom Day has frustrated the public and patience will be worn very thin if there is another delay in mid-July. Last weekend there was a huge march in central London with hundreds of thousands of protesters calling for an end to lockdown and full restoration of freedoms and any additional postponement will only see demonstrations increase.

The lockdown has naturally seen the State dominate every aspect of our lives, even going so far as to impose a ‘casual sex ban’ at the start of the pandemic, a ban which Matt Hancock, now former Secretary of State for Health and Social Care, decided didn’t apply to him. An investigation by The Sun newspaper revealed that Hancock had been having an affair with one of his aides – in his office! He initially offered a paltry apology to try and appease those calling for his resignation but public pressure became too much. The hypocrisy of Hancock deciding to try and tough it out is astonishing. Watch to what he had to say to Kay Burley on Sky News in May last year about Professor Neil Ferguson, a SAGE scientist who pushed the Government to pursue lockdown, who had an extramarital affair during the first lockdown.

Hancock admitted to doing exactly what Prof Ferguson was doing and yet he tried to defend his position and refuse to step down. Hancock was literally speechless in the video above but he had the gall to continue mandating what we can and cannot do whilst having this affair. Government Ministers, especially those at Cabinet level, must be held to the highest standards of public life and adultery in the workplace tends to be frowned upon to say the least. In his meaningless statement on Friday afternoon, Hancock apologised for breaching social distancing guidelines but he told BBC Radio 4’s Today Programme the day Boris Johnson announced the first lockdown on 23rd March 2020 that those breaching social distancing guidelines were ‘selfish’.

Hancock’s refusal to resign as soon as the news broke in the early hours of Friday morning epitomises the supercilious nature of this Government and undermines the rules it has set for us throughout the pandemic. As COVID-19 is in retreat, so is morality in Boris Johnson’s administration. Hancock – the man who told us ‘don’t kill Granny’ and not to hug family members decided the rules he created didn’t apply to him or his taxpayer-funded aide in his taxpayer-funded office. Let us not forget that whilst he was flouting the restrictions he created, those same rules forced HM The Queen to be sat alone at the funeral of her husband of 73 years, a scenario which was played out across the country.

It is staggering that the Prime Minister stood by Hancock and accepted a very insincere apology. Although Boris Johnson sacking Hancock for having an affair would be seen as a clear double standard when he has led such an unfaithful and indiscreet life, to the extent that we don’t know if he has five or six children from three marriages and numerous affairs. Perhaps this decision will put the Prime Minister in a precarious position, especially after Labour narrowly won a crucial by-election by 323 votes in Batley and Spen on Thursday 1st July; a loss which Conservative Party Co-Chairman Amanda Milling said was due to Matt Hancock’s affair.

But this lack of personal responsibility runs throughout the Cabinet. The Prime Minister wants to throw money at the North to retain seats while failing to properly tackle major issues like the cladding scandal and white working class boys being left behind in education. The Home Secretary, Priti Patel, talks a good game about tackling the rise in illegal migrants crossing the Channel but doesn’t do anything to fix the problem. The Culture Secretary, Oliver Dowden, announced his own ‘roadmap’ for reopening museums, galleries and theatres to full capacity but failed to provide any meaningful detail or funding for his plans. The Education Secretary, Gavin Williamson, used a poorly designed algorithm to assign grades for cancelled exams which downgraded over 40% of A-Level results, which jeopardised university places and job opportunities for many students because he said teacher-assessed grades couldn’t be trusted.

Now that Matt Hancock has finally bowed to public pressure, 48 hours after getting caught, let’s hope his successor as Health and Social Care Secretary, Sajid Javid, will have a greater sense of integrity and that this will be a wake up call for other members of the Cabinet who feel rules don’t apply to them. They may believe they lead Departments of State with morality and high ethical standards but how many of them are actually toeing the line. Javid is regarded in Westminster as a safe pair of hands and is one of the most experienced Ministers in Parliament, having served as Culture Secretary, Business Secretary, Housing, Communities and Local Government Secretary, Home Secretary, Chancellor of the Exchequer and now Health Secretary.  He was also the first of the 2010 intake of MPs to run a Government Department back in 2014 so his Cabinet experience spans three Prime Ministers. As Dominic Cummings has left No. 10, relations between Sajid Javid and the Prime Minister will certainly be less strained.