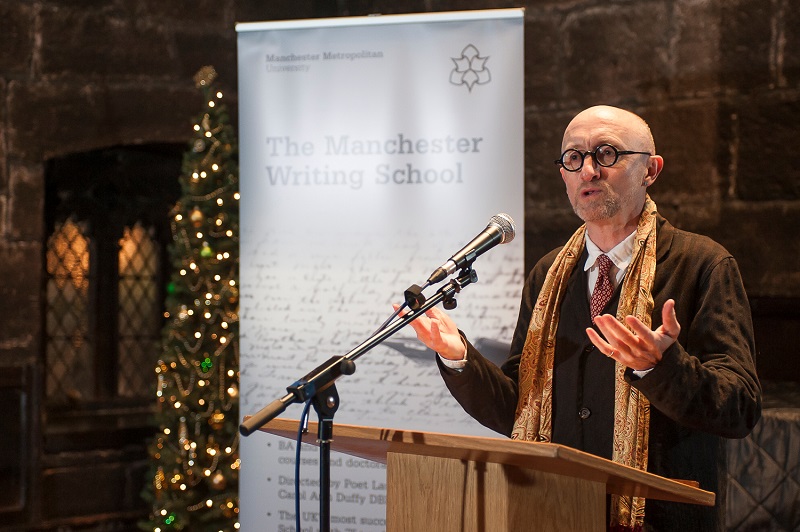 The 2020 Manchester Writing Competition is now open for entries.

The UK’s biggest literary award for unpublished work returns this year as the prestigious Manchester Writing Competition opens for entries.

Each year writers compete for two £10,000 prizes offered by the Manchester Writing School, the most successful writing school in the UK.

The exceptional writing competition, established in 2008 by Carol Ann Duffy (UK Poet Laureate 2009-2019), has been changing lives of authors and poets for 11 years, awarding more than £195,000 in total.

The work will be judged by award-winning writers including Nicholas Royle, Tim Etchells and Irenosen Okojie, Mona Arshi, Malika Booker and Mimi Khalvati.

The deadline for entries is Friday 18th September and competitors must be over 16-years-old to enter.

Nicholas Royle has chaired the competition for over ten years. He is a Reader in Creative Writing in the Manchester Writing School at Manchester Met and the author of seven novels, including The Director’s Cut, Antwerp and First Novel. He tells aAh! what he thinks will make this year special.

“I’m thinking there might be a few more stories about isolation or contagion – whether literal or metaphorical – than in previous years. I’m looking forward to seeing how entrants respond to the pandemic – or don’t respond to it at all. It’s going to be interesting.”

As with each year, Royle is mostly looking forward to reading the stories.

“Before you’ve read the opening line, every story has exactly the same chance of reaching the shortlist. Well, there was that 100-word story one year. Had that won, the writer would have been on £100 a word. You’ve really got to be at the top of your game to command £100 a word. Seriously, though, a story of 2500 words does not necessarily have a greater chance of winning than a story of 250 words. However many words make up your story, they need to be the right words, in the right order. Not that ‘in the right order’ should be taken to imply any prejudice against experimental writing. Just look at last year’s winner.”

Reflecting on the impact the pandemic has had on the publishing industry, Royle explains that although his feelings about the situation change daily, he remains positive in light of the North’s creativity and resilience.

“Whenever I catch myself feeling too positive and optimistic, I remember that some small publishers and bookshops will have suffered and be continuing to suffer and I know that there’s a lot of anxiety around, which should not be ignored. But I also know that a number of small publishers are doing fine and will continue to thrive because of the energy and talent and imagination they possess.”

“I’m excited – looking forward to reading the stories and getting a sense of what people are thinking about. It will be a great opportunity to immerse myself in contemporary writing – there’s something luxurious about that. It’s also rather daunting of course in some ways! I look forward to engaging with the other judges too – Nicholas [Royle] I know a little, from his writing and editing work, especially the Nightjar editions, which I love.”

Etchells tells aAh! what he is looking for in this year’s winner:

“In one sense I feel I am completely open. That’s the state I’d like to start reading with. I just want to see what’s there. How people are telling things and what they are telling. I love that the competition is judged without us knowing the identities or any information about the writers. That feels really important. The focus is on what’s there as story. The words on the page. In that sense it’s really open.

“The fit between form, voice and content is so important. Beyond that I think what I’m most sensitive to is consequence and lack of compromise. I love writers who make a decision about voice, or about structure, or about approach and then stick to it, following through and taking things all the way inside the decisions they’ve made. That resolve is so captivating, so compelling – and it can be as potent in a traditional well-crafted story as it can be in an experimental or formally daring text.”

“It’s a great honour to be asked to judge a prize like this which is really celebrating what short fiction does and exciting new writing in short fiction,” says Okojie.

“I’ve known about the prize for a while and it’s one of the best prizes you see on the short story map. We don’t have many short fiction prizes in the country and this is one of the great ones to look out for.”

She adds: “I want to be surprised. First and foremost, I am looking for an excellently well-crafted story. Because short fiction really has to pull you in the first sentence – it has to pull you in. I am looking for something that does that. Something that sheds light on the human experience in ways that feel new and exciting. But also, just a compelling piece – great exciting story.”

“I would say submit a piece which really reflects who you are as a writer. That showcases your strengths. Trust your instincts about that. Pick something that shows your dynamism as a writer. I’m an experimental short story writer so I’m looking for people who are daring with the form. Sometimes those voices struggle because they think ‘are there going to be judges who are looking for stories like that?’. Well, I am that kind of judge. I want to see those sorts of stories.”

The chair of the Poetry Prize panel is experienced writing competition judge Malika Booker, who is an award-winning poet and Manchester Met Lecturer in Creative Writing.

Booker reveals she is looking forward to the discussions of the longlist, and the shortlisting process.

“It is an opportunity to have great discussions with my fellow judges Mona Arshi and Mimi Khalvati. Both of whom are expert writers and have a vast knowledge of poetics.”

Booker will be joined by Mona Arshi, human rights lawyer and awarded poet. Her debut collection Small Handswon the Forward Prize for Best First Collection in 2015.

The third Poetry Prize judge is Mimi Khalvati, whose new collection Afterwardness is a book of the year in The Sunday Times and The Guardian. Khalvati has published nine collections with Carcanet Press, including The Meanest Flower, shortlisted for the TS Eliot Prize 2007, and Child: New and Selected Poems 1991-2011.

For information on how to enter the Manchester Writing Competition visit www.manchesterwritingcompetition.co.uk and follow @McrWritingSchl on Twitter.