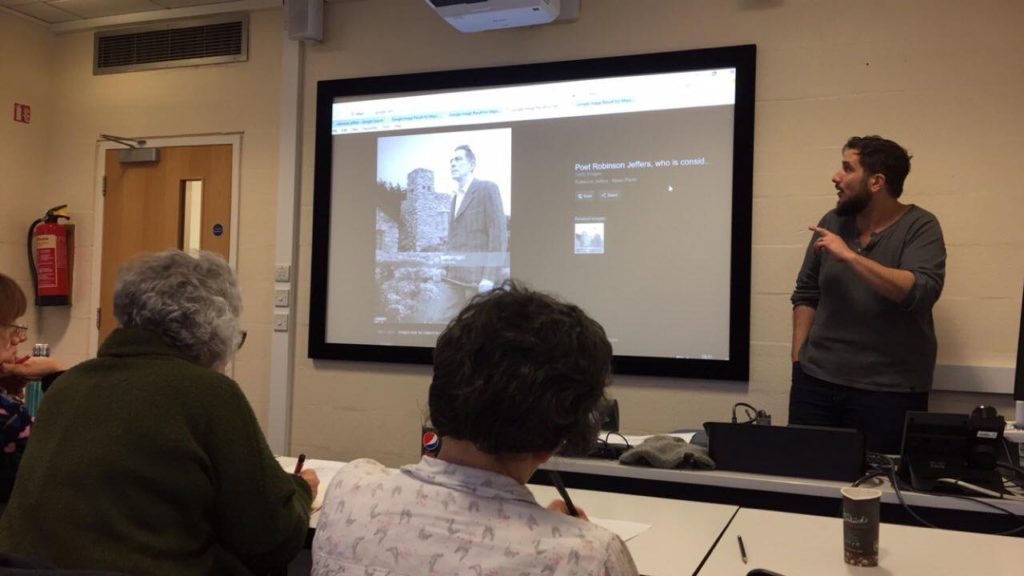 On Tuesday 22nd January, poetry enthusiasts gathered at Manchester Metropolitan University to participate in a lecture and workshop based around the poet Robinson Jeffers (1897 – 1962). André Naffis Sahely, a poet and critic who has written for The Independent and The Economist, led the session, offering attendees an overview of a poet who he feels has “been forgotten for the most part”.

Jeffers is best known for his poems centred around the themes of the environment, often critical of humanity’s involvement in the ecosystem.

Sahely provided his audience with samples of Jeffers’ work, which contained lines that were strikingly relevant, despite being written over fifty years ago. Workshop participants, most of whom were students undertaking Masters in creative writing, pointed to lines such as “The polar ice-caps are melting, the mountain glaciers drip into rivers; all feed the ocean…” as eerily prophetic, particularly for a man writing in 1961.

“Jeffers is more relevant now than he was when he was alive,” Sahely argued. “I would wager he’s going to become increasingly popular in coming years – and that’s not a good thing.”

Central to the discussion of Jeffers is his advocacy of “inhumanism”, a concept based around a process by which humanity diverts attention from itself towards its wider surroundings. Though Sahely conceded that inhumanism is “the worst possible title you could give to a philosophical concept,” he argued that the concept is based around “being part of one creation.” Inhumanism puts forward the argument that man needs to embrace “reasonable detatchment” in order to “overcome love, hatred and envy and neutralise fanaticism and wild dreams.” It is a concept that is misunderstood by most of its critics, Sahely argued.

Sahely was also keen to emphasis that Jeffers is more than just a poet who wrote about the environment. Pointing to Jeffers’ controversial 1945 work, ‘The Double Axe’, as an example, Sahely credited the late poet as one of the first critics of the Military Industrial Complex. ‘The Double Axe’ is a poem centred around a young man who returns from World War II, resentful towards his parents for sending him off to fight. Although this anti-war piece turned Jeffers from “America’s darling to America’s most reviled figure,” Sahely noted that much of what Jeffers wrote about would be relevant today in light of America’s growth as a world power in the years after the poem’s publication.

Although Jeffers is praised by neoconservatives, Sahely maintained that he was a “halfway house between conservatism and liberalism.”

The session ended with a writing exercise, in which members of the audience were invited to write their own poems based on Jeffers’ ‘Inscription For A Gravestone’. Using the poem’s first line, “I am not dead, I have only become inhuman”, for inspiration, different members of the group wrote and shared their own poems. It’s no surprise that many delved into the relationship between humanity and nature, and Sahely advised audience members to “consider what’s outside our window – construction sites. That was part of the problem as far as Jeffers was concerned.”

At the conclusion of the workshop, Sahely shared his e-mail address with the appreciative group, offering to take a look at any work they wanted to share with him.

Mel Whittaker, an English graduate from Cambridge who came to the event to learn more about Jeffers, found the event to be a useful and positive experience, telling aAh! that “it was really interesting to have him contextualised in this way, and then also, it’s interesting writing with a different group of people.”