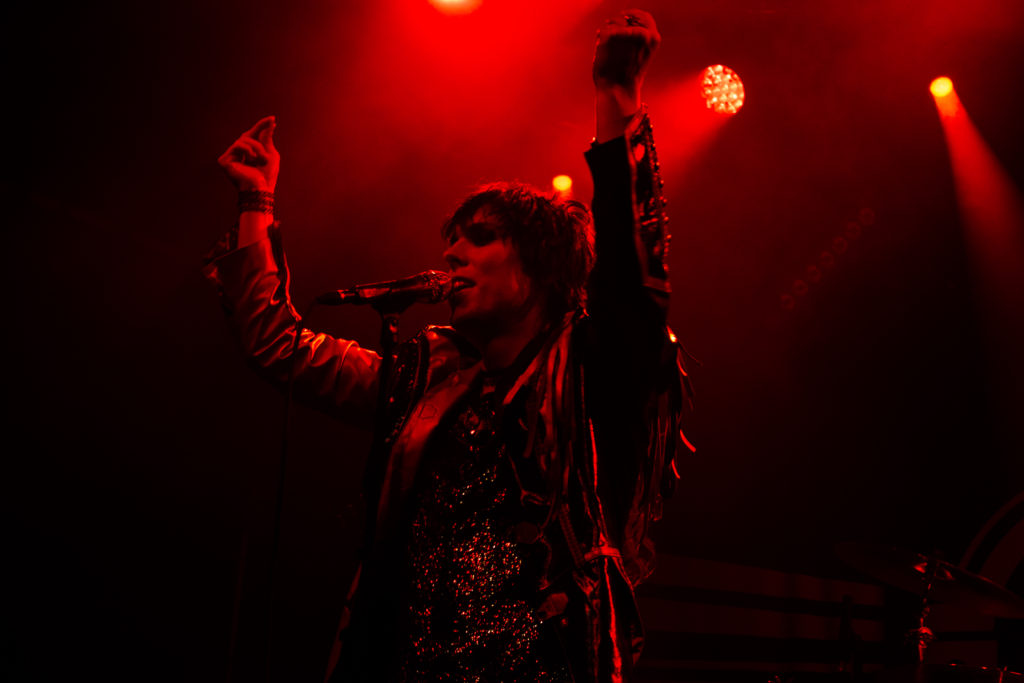 It took almost no time at all for the Academy 2 to fill up in eager anticipation for The Struts. The VIPs may have entered early, but this was to be a night in which everyone in attendance would feel like an old-school celebrity.

Self-proclaimed rebel, Kelsy Karter, has more to her than the infamous Harry Styles face tattoo controversy recently attached to her name. She may even initially appear to be the lovechild of Paloma Faith and Amy Winehouse, with her long flowing locks and her powerhouse vocals. From the first beating of the drum and enthusiastic crowd interaction from the outset, however, it was clear that she’s her own force to be reckoned with. Her leading track was a crowd-pleaser, full of crashing riffs and sultry vocals. Her energy was infectious, mirrored by both the band and the audience, as she bounced up and down during the chorus, further encapsulating the audience with every toss of her hair.

Her next track was a new piece she’d been working on centred on Valentine’s Day, and although she dedicated it to a lucky audience member called Tom, by the time she had finished, everyone in attendance seemed to be clamouring to be her Valentine. As she coaxed the audience into clap along with her, she proclaimed “you look so good… Tom,” drawing him into her act. As she reached the close of the song, the drum and riffs continued to build until they reached a magnificent peak.

‘God Knows I’ve Tried’ was the slowest but most personal song on her set. She charmingly regaled the song’s origin story to the audience, explaining that it was based on a childhood memory of climbing trees, and her mother explaining how one day she’d inevitably climb too high, so no one could catch her. The tempo of the song picked up as it progressed, and the audience couldn’t get enough, bobbing their heads to the riffs. Her powerful voice filled the room as she sang “God knows I’ve tried to be good”. The drumming present before was barely audible and the strumming on the guitar softened during the verses, in order for her voice to remain the centre of attention. Its gospel-like quality was enough to send shivers down the spine.

Her next song was another unreleased beauty, which started off soft but quickly built up into something more dynamic. Containing some captivating riffs, it was perhaps the most hard-hitting track of her set. Past flames do seem to inspire the most raucous tracks, and this rang true for this number. Her hurricane-esque stage manner may have knocked over the mic stand, but a small hiccup like that could never stop her. She carried on like a champion, further proving herself to be a confident performer.

She began the next song by asking the audience “who’s in love?” An appropriate opener for her beautiful cover of Elvis Presley’s ‘Can’t Help Falling In Love’. Bathed in red light, all that could be heard were her voice and a few delicate strums on the guitar, leaving the drums redundant as everyone in the room was trained on her voice.

Her most recent release, ‘Harry’, was the penultimate track of her set. As she launched into it, the drums were back in full force to accompany the catchiness of the chorus, which the audience enthusiastically joined her in counting into. She gestured in time with the drums, which showed just how in tune the band were. Guitarist Joey LaRosa was so wrapped up within his skilful performance that he was almost on the floor by the end of the song. Karter may have confirmed the song was about her love for Harry Styles, but whether that love is mutual or not seemed hardly to matter – if the cheering throughout the set was anything to go by, she had easily won the hearts of the 900 people present.

The final song was reminiscent of a lullaby, the soothing qualities of Karter’s voice allowed to bloom to their full extent. Only a slight addition of snare and light riffs formed the backbone for the song, but that didn’t make it any less effective. Before the track had completely finished, Karter disappeared from view, leaving her band, affectionately termed “The Boys With Long Hair”, to finish the set off, their skills taking centre stage. Both Karter and The Boys worked wonderfully together. It surely won’t be long before these artists will be making waves in the UK.

Kelsey Karter and The Struts might be from different sides of the world, but stage presence is definitely a quality they both share. From the instant introduction of “Manchester, don’t you know who I think I am?” in his attention-grabbing voice, we were instantly presented with a band that thrives on atmosphere and theatricality.

As the lights dimmed and the background music faded, the roar of Luke Spiller signalling the start of the show set the audience alight as they cheered and clapped in zealous welcome as the band strode onto the stage stage, all dressed in glam rock attire favouring a red and black colour scheme. ‘Primadonna Like Me’ was the obvious opener, as it really embodies The Struts’ quintessence. With high energy and a catchy chorus, the audience gave it their all as Spiller cried: “let me see your hands!”

Throughout the show, audience participation wasn’t an option – it was mandatory. From the opening chords of ‘Body Talks’, Spiller got the audience snapping their fingers as he marched around the stage. Soon afterwards, he informed the audience, before launching into ‘Kiss This’, that if they were “not ready to dance then you may as well fuck off to the exit”, as he dramatically threw off his glamorous leather jacket, exposing a glittery top underneath.

Spiller opened ‘In Love With A Camera’ by egging the audience into a steady clap by raising his hand to his ear, teasing the intro. As he reached the first chorus, the crowd were clapping along without need of encouragement, and seemingly couldn’t get enough of what could possibly be the catchiest song on the album. As Spiller announced that “finally The Struts have come back to Manchester,” the crowd erupted into cheers, and Spiller perhaps unnecessarily asked if the audience were enjoying their new album – given their reaction from the get-go, they clearly were.

‘Fire’ was the next track off the latest album to light up the stage. Bassist Jed Elliott started off the track by encouraging the crowd to clap once again, as Spiller jumped in on his efforts, almost stumbling with the mic in his enthusiasm. As the song progressed, each musician raised a hand in the air, representing the wings mentioned in the track.

‘Dirty, Sexy, Money’ saw the continuation of this ecstatic energy, with Spiller shaking his hips before the song was even in full swing. His performance as an old-school rock poster boy continued as he swung the mic between his purring vocals.

Before the next song could begin, Spiller’s heavily-lined eyes scanned the audience as he shouted to the crowd: “shush, shut the fuck up, I have something interesting you to tell you,” before the largest riffs of the night were unleashed and Spiller disappeared from the stage. This mystery was soon resolved, as he returned draped in a red hood and silk jacket. This was to be the first of a few outfit changes paying homage to the rock greats, and added to the night’s electric atmosphere. Spiller would later go on to announce that they did have a budget for confetti, but rightfully spent it on outfits instead.

Some of the older Struts classics made it into the set, and after the success of ‘One Night Only’, this continued with ‘Mary Go Round’, which called for a lighting change, as Spiller implored the crowd to use their phone’s torches to light up the room. It was a more intimate track, and the crowd sang the verses back to him, while he looked majestic, his red silk jacket reminiscent of wings.

In Spiller’s mind, it would seem, this show was still only getting started, as he then treated the audience to a cover of ‘Dancing In The Dark’ by Bruce Springsteen. Drums carried this classic, and the band added their own twist, Spiller cheekily adding “I’m sick of The Struts not being number 1” while pointing to the crowd, and even shimmying with an audience member behind the barrier. They stopped mid-song to search for Spiller’s own Courteney Cox to join them on stage. This naturally inspired a large amount of excitement from the audience, and two young siblings were the lucky chosen ones. They sang and performed brilliantly, greatly deserving of the applause they received at the end.

Keeping up the intensity, as Spiller crooned “bet your body’s so sweet”, he gleefully exclaims how that woke the audience up. The band then launched into hard-hitter ‘Put Your Money On Me’. As Spiller punched his arms in the air and jumped around the stage, the audience backed him up and carried the chorus. Spiller ended the track with a shout of “long live Manchester” and, seemingly deservedly content with how the show has gone.

Gethin Davies mimicked a heartbeat on the drums as the guitars were stoked to full throttle while Spiller made a swift wardrobe change, reappearing in a black top and gold-fringed jacket, every bit the performer. He was the ringmaster of this show, as he declared that he didn’t need flamethrowers – he metamorphosed the audience into human fireworks for the official finale, ‘Where Did She Go’. The audience collectively leapt back to their feet in a movement that seemed symbolic of the energy of the night.

The band may have just wandered off stage, but the audience wasn’t finished with them yet, stamping their feet and clapping until they reached a crescendo. The Struts returned to the stage, Spiller seating himself at the piano, having completed his final wardrobe change and now wearing a fabulous purple and white jacket. He took the time to dedicate the next song, ‘Ashes’, to everyone in the audience. “Sing it to me” he shouted, and the crowd naturally back sang word perfect.

‘Could Have Been Me’ was the perfect choice for finally closing the set, summing up The Struts’ ethos – a band who “would rather go out in a blaze of glory”. Every single member of the audience was bouncing and clapping, finished off by powerful drumming and clean riffs. As the musicians finished the song and towelled themselves off, Spiller cried out: “Manchester, remember the night of The Struts” – and what a night it had been.

Despite their somewhat uncanny resemblance to Queen, it would be foolish to pin this band down as merely a tribute act. As Spiller astutely pointed out during their set, following this tour, their progress will surely be astronomical. Don’t just take his word for it, though. Attend one of their dance-filled performances, and you’ll soon realise that the body really does talk.