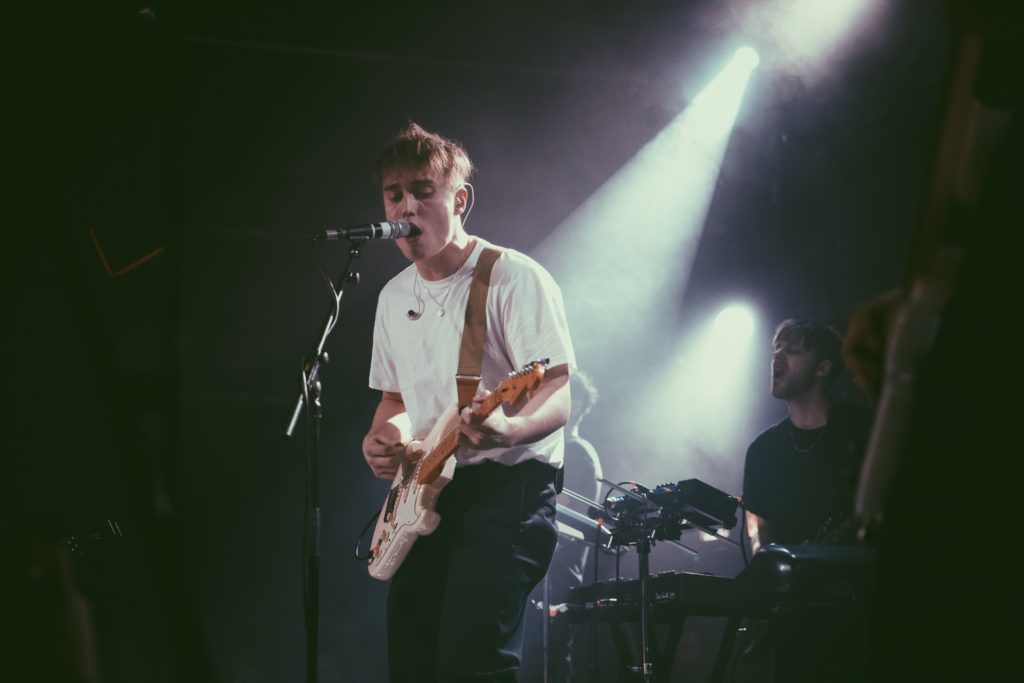 At first glance, the bright Hollywood-style lights of the Gorilla sign outside may be a far cry from the real Los Angeles, but given the performance to come, it’s definitely not a ludicrous improbability that Fender and his band could be making their way there in due time.

However, before they could take to the stage, responsibility fell on fellow North Shields band, Hector Gannet, to warm up the crowd, who waited eagerly for their set to begin as they adjusted their guitars and drums. The band, fronted by Aaron Duff, is perhaps the Northern music scene’s best-kept secret, with just over 300 followers on Instagram. A grand claim to make, perhaps, but the proof really is in the performance.

From the very start of their set, they had the audience bobbing their heads along with the leading track, ‘All Hail’. The heavy drums and deep, almost gravelly vocals suited the subject matter well. Combined with containing a catchy instrumental with high-powered riffs, they were off to a flying start.

Their next track, ‘Black Habits’, revealed another side to their sound, showcasing smooth, syrupy riffs. As the powerful instrumentals which overlaid the chorus dropped back during the verses, Duff’s vocals really came alive, revealing his talent as a singer.

To ensure the energy wasn’t lost after the slow but beautiful ‘The Whin Sill’, the band then kicked it up again with ‘Hollow’. This was to be the heaviest song of the set, with powerful drums and riffs to pick up the pace. It was also framed for effect by flashing red and orange lights, which matched the smooth changing pace and intensity of the song well.

Hector Gannet finally finished the set with two songs inspired by their hometown, North Shields, illustrating the centrality of their roots to their work. ‘In Fading Light’ featured unique percussion and carried on the tempo, while the stage was bathed in calming, naturalistic blue and green lights. Their origins were also emphasised in between songs, with Duff unnecessarily apologizing if he couldn’t be understood on account of his accent. However, this is what made the band so charming, and the crowd responded well, even goading him to announce “why aye lads” before dipping into the final song of the night, ‘St. Aidans’. It was a picturesque and beautiful number, slow yet no less than impactful than its predecessors. The band clearly collectively put everything they had into the haunting song. When they had played their final notes, all that was left to say was a thank you. The crowd cheered enthusiastically, further demonstrating that the band had got it tightly together by the end.

Once they tidied their equipment away, it wasn’t long until Fender took to the stage with his band. The venue was packed, including a line along the balcony above. His entrance was marked by audience members clamouring to get closer to the stage, and ear-splitting streams could be heard from all directions.

Throughout the set, we were treated to a range of old favourites and new releases. From the instant catchy riffs of known hit ‘Millennial’, followed by new crowd-swayer ‘When Will We Talk’, showcasing Fender’s vocals as he croons “Will you take me home?”, the performance began as it was to go on – phenomenally. It was the first time the band had played as a group of five, and yet they flowed so perfectly together on stage that if it hadn’t been pointed out by Fender, nobody would have been able to tell.

Unreleased track ‘All Is On My Side’ saw Fender proclaiming “take me back to your bed”, and despite both old and young members of the audience alike cheekily shouting that they’d be happy to, this was an emotionally driven and raw song. Fender characteristically never holds back on his lyrics, a theme which continued with next new song, ‘The Borders’. It featured particularly and raw lyrics, such as “I can’t stand me too” and “took those pills now she’s gone” , packaged up with strong riffs.

As soon as the starting electronic melody for ‘Dead Boys’ began, a  wave of phones immediately popped up to encapsulate the moment. The prelude built the tension that filled the room, with only a simple white light shining on the band. One of their more well-known tracks with pithy lyrics, it certainly deserved the high energy appreciation it received from the audience. As the drums built up and Fender shouted “come on, Manchester!” the crowd riled themselves up further, and showed no sings of letting up throughout the rest of the set.

‘Start Again’ saw the crowd exclaim with excitement, as it was one of Fender’s most tried and tested tracks. When it finished, a man in the audience even shouted: “Sam, I want your babies!” Taking this slightly bizarre compliment in his stride with easy banter, Fender naturally replied “meet us round back” – the perfect charismatic frontman.

‘Greasy Spoon’ was equally well received, followed by ‘Spice’, which received one of the biggest cheers of the night, as it was confirmed by Fender to be the first time they band had played it live. Moshing, catchy melody and great lyrics – what more could you want?

During the set, Fender teased the audience with hints about which tracks could be being released very soon for singles, namely ‘Hypersonic’, which is potentially the first track of the new album. A politically-driven track, the crowd punched the air as Fender zeroed in on Trump’s America. With thought-provoking lyrics such as “God bless America / cyanide” and “I’m not smart enough to change a thing,” it’s definitely one to look out for, as well as the slow, melodic track ‘The Chance’, which should also be out soon.

Unfortunately, the set wasn’t without its hiccups. Dean’s powerboard going down did incur some worried looks from the band, inspiring Fender to state that he’d share some jokes if he wasn’t so knackered. However, this worked out for the best, as instead of seeing Fender try his hand at comedy, we were instead treat to a solo version of ‘Poundshop Kardashians’ which he was going to save for the end, but instead, he told his bandmates they could sit down and have a cuppa while he worked his magic. The stripped-back approach really make his vocals and lyrics shine, and the crowd backed him up as he shone under a single spotlight, strumming solo. It was to be a real highlight of the show. This left ‘Play God’ as the unofficial finale of the night, which saw the band regain their flow, the audience raising their arms in the air in appreciation. In the final moments, his guitarists and bassist brandished their instruments in the air, victorious in the success of the evening, before disappearing from the stage.

However, it wasn’t long until the band re-appeared to the sound of the crowd shouting for their return. The audience was only all too happy to perform for him, to a teasing response from Fender – “what a farce… thanks for playing along!”. They eagerly added their collective vocals to Fender’s second solo performance, ‘Leave Fast’ – one of his most loved-tracks on the subject of anxiety about being stuck in your hometown. The riffs were soft, with a light melody to keep his vocals central. He held the note at the end perfectly, further serenading the audience. Despite Fender declaring that ‘That Sound’ is a direct rip-off of that instinct Mancunian sound and that they’ll inevitably be getting sued from a Manchester band at some point, it is no less a hit. The audience seemed to use up the last of their energy on this final track of the night, joining Fender as he took his stand against those who doubted him – “everyone wants to leave but no one wants to see you do it” – powered by energetic drums and riffs to spare. A fitting last track for what had been a highly successful night.

It has to be said that despite the opinions of some regarding the demographic of his fanbase, inside the venue it wasn’t just a lion’s den of teenage girls. His music really is universal, and definitely shouldn’t be put down to his poster-boy appeal alone. Sam Fender, with his preference for a milky brew over beer during his performances, superbly showed himself to be part of the new generation of indie rock legends. He may have been blessed with impressive vocal cords, but he doesn’t just rely on his talent. He informed the crowd that the first album is pretty much recorded, but that he gave himself tonsillitis in the process, as he thought he had less time than he did to finish it. This may read as an excess of effort, but considering that the band only released their first song a year and a half ago, they are clearly striving to do their best, and we will certainly be eagerly waiting for the arrival of his debut album.