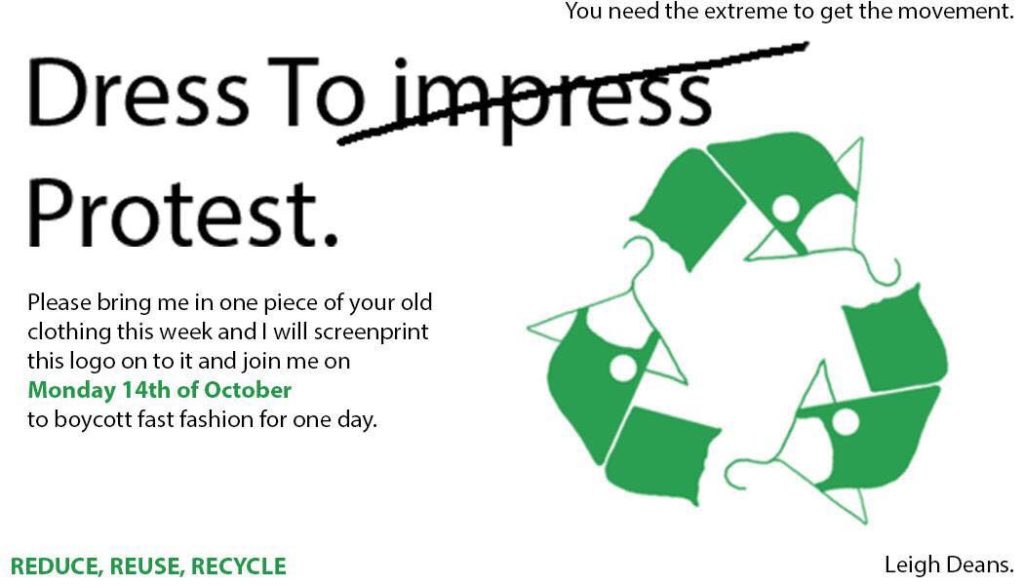 Taking place on Monday 14th October outside the Manchester School of Art, Deans will host the Dress To Protest day of action to raise awareness of fast fashion and promote a reduce, reuse and recycle campaign to reduce the carbon footprint.

Currently global emissions from textile productions outweigh the carbon footprint of international flights and shipping combined, at a whopping 1.2 billion tonnes of CO2.

Fast fashion is described by fashion blogger Solene Rauturier as “cheap trendy clothing, that samples ideas from the catwalk or celebrity culture and turns them into garments in high street stores at breakneck speeds”.

Consumption of fast fashion is on the rise, with 80 billion new pieces of clothes being created every year – a 400% increase from only two decades ago.

Another shocking statistic is that 20,000 litres of water is needed to produce just one kilogram of cotton, which is the equivalent to a single t-shirt and pair of jeans.

The protest will culminate at 4pm outside the School of Art, with Deans screen printing donated t-shirts and tote bags to raise awareness of the environmental, social and cultural detriments of fast fashion throughout the week.

Anyone can swing by the event, join in the protest or show their support. Dress to Protest event details can be found here.