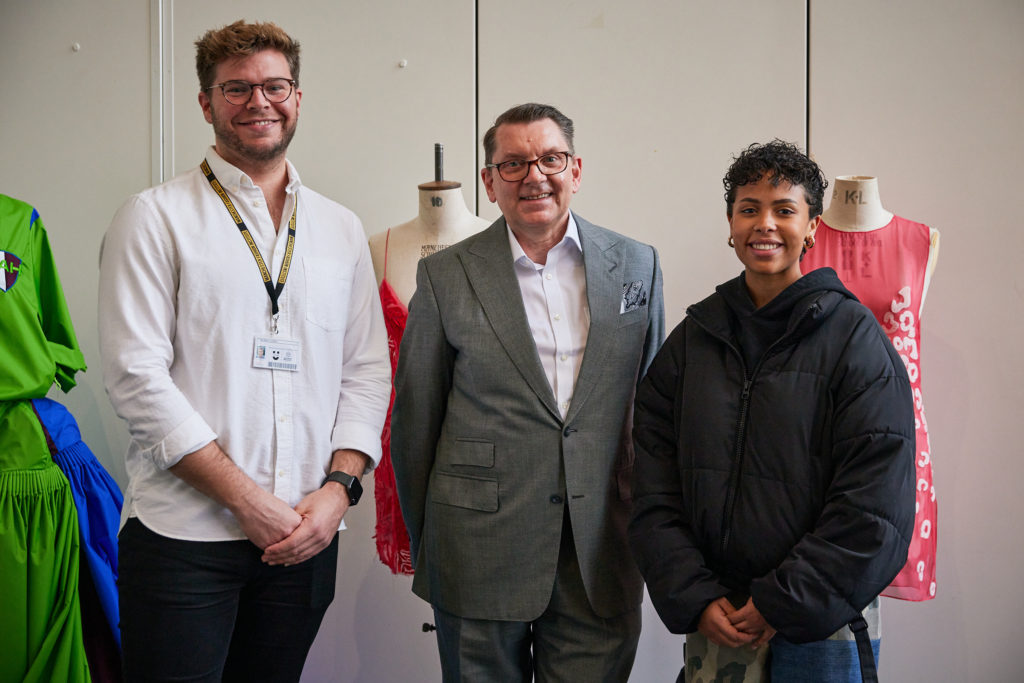 Griffiths graduated from the University in the 1980s, before progressing on to the Royal College of Art and then joining Max Mara as a junior designer. He provided a detailed talk on his experiences exploring self-image in Manchester in his youth, as well as announcing the launch of a new scholarship scheme funded by Max Mara to a packed venue of current students, tutors and fellow alumni friends.

The Max Mara Opportunity Scholarships in Fashion will provide funding for six students over three years from Black, Asian and Minority Ethnic backgrounds, addressing the need to improve racial diversity and inclusivity within the fashion industry.

Griffiths explained the importance of these scholarships to help improve the diversity and inclusivity within the fashion industry. He referred to the importance of diversity in his talk, sharing a story on the positive reception of his Middle Eastern Collection featuring world famous hijab model, Halima Aden. He described this as a “simple gesture that created a whole buzz and in fact, broke the internet”.

The talk began with an insight to his life, not of a fashion student, but as a Manchester club-kid in the 80s. Griffiths displayed several, delightful portraits of himself in his youth, taken by the notable Kevin Cummings, who has photographed the likes of Bowie and Manchester band Oasis.

The photographs featured Griffiths in his “everyday” attire featuring his own elaborate and innovative designs, which he described as an exploration of self-image that disregarded class. Though these outfits were his norm, he spoke about such designs coming to life at night within the Manchester clubbing scene, whereby the clothing also became a form of performance amongst him and his friends.

He said: “Clubbing was culture and clubs were more than just social spaces, they were cultural spaces. Every time we put on our makeup, it was a kind of political gesture and a gesture of defiance.” This defiance is also in reference to the verbal and sometimes even physical abuse his aesthetic triggered amongst heteronormative communities.

Griffiths provided a wonderful focus on his own experiences studying fashion at the University. With many students in the audience being familiar with areas that he lived in, references to his time living in Hulme received a great response, especially as he went on to talk about how his time there still influences him today.

“Hulme was a growing community of young bohemians, which refers to musicians, artists, drop-outs… That was me. Students and squatters, people like me, who relished the estates’ air of decay and modernism,” he added.

“To us it was exciting, we loved its proximity to all the clubs and the fact that the council were too embarrassed to collect any rent, and of course, the large numbers of cool people that you would be rubbing shoulders with,” shared Griffiths, making reference his former next door neighbour but one, Stone Roses’ frontman, Ian Brown.

Connecting with this process of exploring their own self-image and design style, the student audience were delighted to hear Griffiths’ remarks on his previous approaches to style, specifically his degree show here at the university.

When showing some of his old designs, he said: “How do I feel about these images now? I wish they weren’t so brash and gregarious. I’m putting myself in the role of a historian rather than me, personally.”

Despite these views on his older designs, Griffiths outlined that their significance did not reside in their lack of high-quality materials but more the way in which the materials he did use were presented: “The quality or the finesse of the execution didn’t matter; it was simply the idea. When you think about it, it seems such a long way from Max Mara which is famous for its well-designed classic, but I’ve always believed that classic doesn’t have to mean conservative.”

He then moved on to discuss his current position at Max Mara and how the club-kid became Creative Director for a brand known for its sophistication. The idea for his role in the brand was to encourage this notion that Max Mara wasn’t far off from those, not on the runway. The desire was to incorporate elements and influences of areas not fully represented within the industry, for them to be seen in a new light and Griffiths contributed to this.

Griffiths’ talk was a perfect introduction to the launch of the new scholarships, centring around his passion for inclusivity within the industry. Not only is Manchester Metropolitan University where Griffiths studied and experienced the realities of living on benefits, but it is also a university where over a third of the student body self-idenitify as having aBlack, Asian or minority ethnic background, making this partnership ideal.

After the talk, members of the audience were invited to ask Griffiths questions. When asked what the main reason for his success was, Griffiths shared: “The reason why I’m still here after all these years and still loving it, is because I’m totally engaged with the person who wears Max Mara and the rise of that person.”