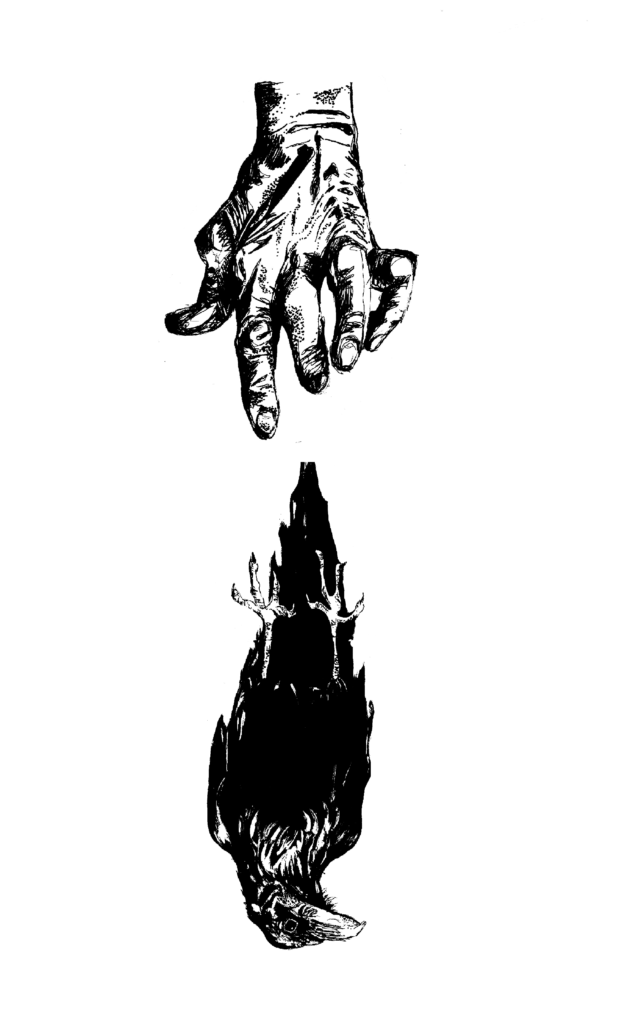 The boy and the girl walked side-by-side. Crows hung from the branches, their beaks open, eyes bulged, feet held together with twine. The boy cast them strange, fascinated glances as they passed. The girl took no notice at all.

The path they followed ran dark. What had begun as sand turned into dirt, which heavy rainfall had turned to mud. It had rained for three days straight. Rained till day and night bled into one, rained until he had begun to despair.

And the noise! Like thunder, the cold stinging his skin, soaking them to the bone. ‘Here,’ the girl had said, pulling the skin of a Ware apart, and there they had outlasted the rain. He remembered the face on the Ware, gristle in its teeth, the yellow of its eyes.

A large slit ran down the middle. They had not been the ones to make it- the beast had been dead when they found it. Thank God. He had not been sure what they would have done if it hadn’t. Died themselves, probably. No, that wasn’t right. He looked at the girl again. She would not die easily. There would only be one of them lying still on the forest floor.

The girl wore a crown of daisies. Her hair fair, eyes colourless, skin pale. Yet her feet, weighed in the same clogs as he, moved with a gracefulness, a lightness, akin to the Fae.

Their mother, as the girl grew older and more beautiful, had often accused her of such things. ‘A challenging.’ The old woman had spat, her face lined with the years she had wasted. ‘A challenging, and a sore one to boot. She belongs in the fire. We oughta’ve tossed her there at birth.’ He had sat by his mother’s knee and rubbed at his stockings. He wanted to tell her nobody belonged in flames, not people, not the beasts in the forest, nor the Kings and Queens of other lands. Flames were hard to undo. He was not devious like her (Mother, so dutiful, to have tempted them into the forest and commanded them to wait) nor did he have the cunning of his sister.

He poked at a hole in his many-stitched waistcoat and stared at the crows. The rain had slicked their feathers to the colour of tar, and he felt sure that any moment they would begin to move.

‘I’m hungry.’ It was partly true. Though his hunger pains had quieted, the closest thing either of them had had to a good meal was dandelion-stems. ‘Why don’t we take one of those crows down? Father showed me how to light a fire with flint. If we could find some…’ But even as he suggested it he knew it was futile. There was darkness here. Whether it was the darkness of Pagans the Holy Men of their village warned against, or the darkness of witches, or Ware-Wolves, or simply that of evil men, he did not know. But that much was clear. Nothing good would come of consuming a hanging crow.

As they turned a corner the trees began to separate. His heart hammered in his chest, hoping, praying, that they had finally found a way out of the woods, slowing as he realised it was a forest clearing. Trees seemed to bend here, distorting the light, forming a canopy. But that wasn’t the best part- there was a house! Houses meant people. People meant an exit from the Woods. He made to stride forward but his sister held him back.

‘What?’ He snapped, stomach growling. She put a finger to her lips. ‘Isn’t this strange? Just look at that house.’

The walls were the colour of cake, and the smell of biscuits wafted from an open window. The windows were glazed. He blinked, trying to be sure, but yes- actually glazed, like icing. Thick wafers formed the roof. Chocolate tears hung from liquorice gutters, and a row of jelly-beans paved a path to the front door.

Apart from the crows, it was like something out of a dream. He licked his lips. ‘I’m hungry.’ He repeated. His sister sighed. They should be cautious in the forest, but he was so hungry. Thoughts would come clearer after a good meal.

The girl insisted on knocking at the door. The boy poked the wall, and was surprised to be met with resistance. Not cake, then, but biscuit. Marshmallow grew around the door. He took a bite. It was the best thing he had ever tasted. His sister opened her mouth to chide him, but before she could say anything the door opened.

Before them stood the oldest woman he had ever seen. She gnarled hands like the washer-women in their village, but none of the kindness in her eyes. Her skin was grey and moulting, her teeth yellow. Her eyes reminded him of the Ware.

They spent the night there. Their beds were soft, although anything would have been better than the belly of the Ware. In the morning he rose, the smell of breakfast bringing him downstairs. He was surprised to find his sister and the woman deep in conversation, and stopped before the door.

‘You’ll teach me magic?’ His sister’s voice, excited, rang cleanly through the wall. He heard the clink of cutlery, the scraping of a plate.

‘For the right price.’ The woman said, her mouth full. ‘For a week’s labour, I can teach you a spell that will return you to your village.’

‘Or I can teach you how to never need anyone again. Even him.’

The boy staggered back. He snuck out the backdoor, carefully, and sat on the grass. The woman was a witch! He had hoped she was just odd, or senile, like the normal kind of crazy old woman who lives in a forest. And she had been so nice when she fed them yesterday. Magic wasn’t bad in itself, but those who used it often became bad. He didn’t want that for her.

His sister returned. Her hand on his shoulder. A sliver of daylight between them. They sat together for a long time.

Eventually the girl rose. ‘She wants us to work.’

That night his dreams were festered. He rolled in sweat-stained sheets, grunting softly, fists clenched. He was with his father. On the mountains. The air was sharp and sweet, the goats bleating loudly. His father looked well, which was largely how the boy knew this was a dream.

‘I feel it.’ The boy stared up to the mountains, which were heavy with snow. ‘It’s nice up here.’

‘Don’t dawdle. Work is work.’ They continued down, herding the goats along.

‘Why?’ It was the simplicity of the word, more than anything else, that caught the breath in his throat.

His father thought. ‘I did my best with you. But the fight’s not in you. Like these goats. Made for  sacrifice.’

‘Sacrifice.’ The boy repeated, bitterly. He looked to the snow, which had begun to smother the land. Wind stung his eyes.

‘All magic requires sacrifice.’ His father said, in the witch’s voice. He looked around, distorted as he woke. The mountains slipped away. He lay in the bathtub, up to his neck. His sister was speaking. He tried to reach out for her, but his arms were heavy. The coldness of the mountains was still on his skin. The witch’s hand was on her shoulder. She mumbled words, faster and faster, as the water rose over his eyes.

His skin to feathers. His eyes shrank. Pain ran like claws down his spine. When it was over he curled up, but she straightened him out. She took him by the feet. He already knew where they were going.

They picked the lowermost branch of a Hawthorn tree. His brothers did not look surprised to see him. She was crying, naturally, but his sharp bird-eyes did not miss the pleasure. The expectation of magic. She tied him to the branch, too low-down to see the rest of the crows; for this, he was glad.

Days bled into weeks that grew to months. She sat with him often. Sometimes she brought excuses, other times blame. Never news from home. He watched as his sister grew into a woman, her reputation growing with her. The witch disappeared one day and did not come back. She stopped coming to speak to him a long time ago. He wondered if she remembers which one he is. Insanity is normal for crows, flickering, as they do, in their half-tongue, but he held on to himself. Waiting.

One day, it happened. She stood, holding her staff high. Flames swirled, dark golds and wicked orange, and soon the house was alight. Smoke ate up the canopy. Heat singed his feathers. He came to her, with deadwood wings. They stood, once-girl and not-boy, and watched the walls fall, the roof cave in, the sky a shroud in black.

This creative piece was submitted as part of our June Theme: Fairytale. If you would like to submit your own creative work to aAh! Magazine, please email aAh.Editor@gmail.com, and be sure to check our latest “Letter from the Editors” to find out next month’s theme.